More than 100 Indians, representing tribes from across America, gathered at Plymouth for a national day of mourning to focus attention on the plight of the American Indian.

About 25 Indians took over the Mayflower II, threw a small cannon overboard, climbed the rigging to throw down a 17th century British flag, threw a mannequin representing Christopher Jones, the Mayflower’s original captain, over-board and then threatened to cut the mooring lines and set the ship adrift.

The Indians left peacefully when police arrived and no arrests were made.

Several hundred tourists were mixed among the Indians when Russell means, a Sioux from Cleveland, stood at the statue of Massasoit and said: “The white people came here to seek religious freedom, and they have denied us our freedom.”

. . . Means said that Americans are alarmed about the alleged My Lai massacre in Vietnam “but they fail to recall the many massacres of Indian tribes in this country at the hands of the American Cavalry, less than a century ago.”

The man who began the Day of Mourning was Frank James. His name and the reason that the day was begun should have been mentioned.
Login

On this day in 1970, a group of Native Americans attending a Thanksgiving feast in Plymouth walked out in protest. The Indians and their supporters gathered on a hill overlooking Plymouth Rock near a statue of Massasoit, the Wampanoag leader who had greeted the Mayflower passengers 350 years earlier. The protesters spoke about their long struggle to preserve their land and culture. The fourth Thursday in November was not a day for thanksgiving and feasting, they declared, but for grieving and fasting. As most Americans continued to observe the holiday in what had become the customary way — with football, parades, and family gatherings — the native people of Massachusetts began a new tradition: a "National Day of Mourning," held in lieu of Thanksgiving celebrations.

. . . the English proclaimed a day of Thanksgiving for their safe arrival at Jamestown years before the Pilgrims landed at Plymouth. 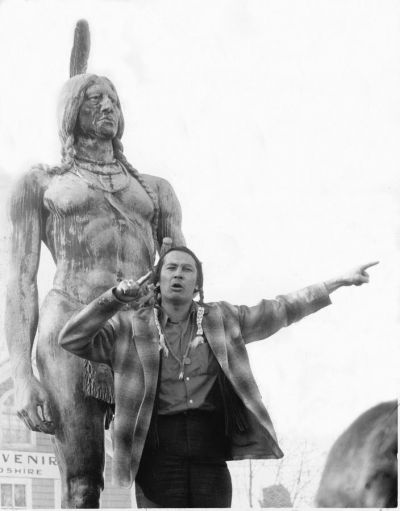 A century ago, when heavy immigration brought large numbers of southern and eastern Europeans to the United States, civic groups and educators set out to assimilate these new citizens. At settlement houses, workplaces, and public schools, immigrants were taught to see the Pilgrims as models for their own families. The story of the "First Thanksgiving" was a key element in the curriculum. The tale of Pilgrims and Indians sharing a feast of turkey, stuffing, cranberry sauce, and pumpkin pie became part of American lore.

The problem is that the familiar version of the "First Thanksgiving" is largely a myth — a myth that misrepresents the experience of the native people at Plymouth in 1620. The traditional Thanksgiving story evokes, and is usually taught as, a benign and mutually beneficial relationship between the Pilgrims and their Indian contacts. Many Native Americans believe this happy fiction hides the truth of how they were dispossessed of their lands, their religion, and their traditional way of life when the English colonists came to Massachusetts.

Even the phrase the "First Thanksgiving" is a misnomer. The Wampanoag Indians who lived in Plymouth Colony before the arrival of the Pilgrims considered all of nature to be a sacred gift from the Creator. They had been holding ceremonies to give thanks for plentiful harvests or other good fortune from time immemorial. The English settlers were also accustomed to setting aside a day of prayerful thanksgiving for divine providences; indeed, the English proclaimed a day of Thanksgiving for their safe arrival at Jamestown years before the Pilgrims landed at Plymouth. The celebration that took place at Plymouth in the fall of 1621 was a traditional harvest celebration. Thanksgiving Day as we now know it would not develop for another 200 years.

"[M]any of the Indians [came] amongst us [including Massasoit and 90 men] whom for three days we entertained and feasted, and they went out and killed five Deer, which they brought to the Plantation."

After an abundant harvest in the fall of 1621, the Pilgrims decided to celebrate by holding a three-day feast with games and gun-firing. One of the colonists reported, "[M]any of the Indians [came] amongst us [including Massasoit and 90 men] whom for three days we entertained and feasted, and they went out and killed five Deer, which they brought to the Plantation." Food historians say that the menu probably featured duck, geese, turkey, pumpkin, squash, corn, and fresh and dried fruits, and berries (but no pies, since there was not enough flour or butter for crusts). The Indians would have understood this as the sort of gift-giving and celebration that they were accustomed to sharing with friends and allies.

Political and religious leaders continued to declare days of fasting when times were hard and days of thanksgiving prayer when they were good. By the beginning of the eighteenth century, thanksgiving days in the fall had become annual events. The morning was spent in worship at the meetinghouse; the afternoon, feasting on the fruits of the harvest. An increasingly mobile population welcomed the annual Thanksgiving as an opportunity for loved ones to return home. By the second quarter of the nineteenth century, the day was a nearly sacred family occasion in New England.

Hale hoped that a national day of thanksgiving would strengthen family ties and bring unity to a country approaching civil war.

In the 1840s, Sarah Josepha Hale, the editor of an influential women's magazine, launched a campaign to make Thanksgiving a national holiday. New Englanders had taken the custom with them when they moved west, but it was observed on different dates in different states and territories. Hale hoped that a national day of thanksgiving would strengthen family ties and bring unity to a country approaching civil war. Hale finally succeeded in 1863, when Abraham Lincoln proclaimed that the fourth Thursday of November be set aside to give thanks and praise for the nation's blessings. Not surprisingly, white Southerners considered Thanksgiving a "Yankee holiday" it was not widely celebrated in the South until the Spanish-American war reunited the nation against a common foe.

As Thanksgiving became a fixture of American culture, the story of the "First Thanksgiving," with its misrepresentation of the native experience, remained largely unchanged. In 1970 the protest in Plymouth began the process of educating the nation about the history and survival of the Wampanoag people.

Plimoth Plantation is open seven days a week from the end of March/ early April through November.

Thanksgiving: The Biography of an American Holiday, by James W. Baker. University of New Hampshire Press, 2009.

Mayflower: A Story of Courage, Community and War, by Nathaniel Philbrick (Viking, 2006).