Indolence [of the Hawaiians] may be considered as a native characteristic. Little to excite them to action they spend many precious hours in sleep.Their women do no work of any consequence, they think it rather a disgrace. Their manner of living requires but little labor as they generality wear no clothing and live almost wholly upon raw fish and poa. . . . The curiosity and wonder of the native seems to be much excited to see women work. There are some times nearly a hundred persons standing round our fence and gazing at us while we are cooking. Before we had our yard tabood [sic] they were around us so thick we could hardly move for them. Whenever we walk out we are generally escorted by a large concourse of men, women and children.

From the journal of Maria Loomis, Honolulu, 21 June 1820, quoted in Paths of Duty: American Missionary Wives in Nineteenth-Century Hawaii, by Patricia Grimshaw (Honolulu, 1989).

I believe this topic was handled in James Michener's book "Hawaii' as well as in the later film of the same name, some of which was filmed in Massachusetts.
First Missionaries...

Fascinating! What were the names of the Massachusetts missionaries and from what towns did they come?
First Missionaries...

1) While the missionaries may not have seen native Polynesians farming, it was because they did not understand what native farms looked like. Native Hawaiians had extensive, highly complex farms. Wetland (as opposed to dryland) taro or "kalo" farming required complex irrigation not unlike rice cultivation. Natives also had extensive fish farms. 2) Hiram and Sybil Bingham who were stationed on Oahu returned to New Haven and are currently buried in the Grove Street Cemetary next to the Yale Law School. Their son, also named Hiram, also did extensive missionary work in the Pacific and their grandson Hiram discovered Machu Pichu and became a senator from Connecticut. ------------------------- Jonathan M. Chu
First Missionaries...

I was taken aback by MassMoments' apparent acceptance of the missionaries' characterizations of the Hawaiians as "near-naked", ignorant of "civilized" ways, and apparently "lazy". Thank-you for posting Jonathan Chu's comments! ------------------------- Yvonne Powell
First Missionaries...

Two of the Massachusetts missionaries were Asa Thurston, born Oct. 12, 1787 in Fitchburg, MA and his wife of Marlboro, MA (now Hudson, MA). I spent 3 years digging Asa Thurston's homestead while teaching school children about archaeology. Only the foundation remains. The Fitchburg Historical Society holds a great deal of information about Asa Thurston and his wife, including a book by his wife Lucy (Goodale) Thurston, and drawings by one of their daughters, Persis. One of the other postings is correct - this story is the basis of Michener's book, Hawaii and also the movie by that name. There is also a Reader's Digest article about the making of this movie in the mid 1960s. Part of the movie was filmed at Old Sturbridge Village, and a part in Fitchburg. The 3rd (maybe 4th) great grandson of Asa Thurston, (Thurston Twigg Smith) lives in Hawaii, but visited the family homestead in Fitchburg on a couple of occassions in 1966; even taking the well-head from the property and taking it to Hawaii. Thurston Twigg Smith was the founder of the Advocate, Hawaii's leading newspaper, but is now retired. Asa Thurston built a church in Kona in 1820 which remains active to this day. Much more info is available from Fitchburg Historical Society, 50 Grove St., Box 953, Fitchburg, MA 01420 for a modest fee (they're a private institution). Research is free to their members.
First Missionaries...

Quote: Originally posted by: YPowell I was taken aback by MassMoments' apparent acceptance of the missionaries' characterizations of the Hawaiians as "near-naked", ignorant of "civilized" ways, and apparently "lazy". Thank-you for posting Jonathan Chu's comments! ------------------------- Yvonne Powell

I don't believe MassMoments accepted the missionaries characterization but simply reported it. Unfortunatly the attitude that "civilized" means European or American was popular in past times and sometimes still is today. Look at how the Native Americans where treated by most European settlers.
First Missionaries...

The Judsons of Bradford (Haverhill) I believe were the first missionaries to Burma under the same missionary society. See here for more: http://en.wikipedia.org/wiki/Adoniram_Judson
First Missionaries...

On this day in 1819, a crowd gathered on a Boston wharf to bid farewell to the first Protestant missionaries bound for Hawaii. Among them were seven Massachusetts couples, four of them recently married. After a difficult five-month voyage, they got their first glimpse of the Big Island and its people. The islanders were friendly, curious, and easy-going, but their near-nakedness, ignorance of "civilized" ways, and apparent laziness shocked the missionaries. Although frustrated by the natives' lack of interest in farming, sewing, cleaning, and cooking, most of the couples stayed for years, building New England-style churches and schools, translating the Bible and other Protestant works into Hawaiian, and providing medical care. Most never returned to New England.

. . . the Boston-based American Board of Commissioners of Foreign Missions (ABCFM), which sponsored the Hawaiian mission, initially required all missionaries to be married . . . 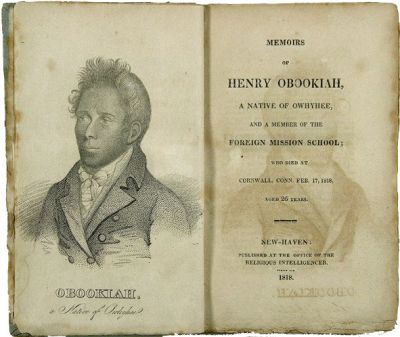 Several of the men who left Boston for Hawaii in the fall of 1819 had been classmates at a mission school in Cornwall, Connecticut. A fellow student there was Henry Opukaha'ia — called "Obookiah" — the first Hawaiian convert to Christianity. He had left his native land in 1808 aboard a merchant vessel. Once in the United States, he trained to become a minister. He shared stories of the people of Hawaii, describing them as heathens who practiced idol worship and were prey to the loose morals of the European sailors who had been visiting their tropical islands for the past century.

Before Henry Obookiah had a chance to carry his Christian message home, he fell ill and died. In 1818 a memoir of his life became a bestseller among evangelical New Englanders; many readers were moved to help realize his dream of a Christianized Hawaii.

Most people were satisfied to raise funds or contribute money for the new mission, but a small number of men and women sought to go to the islands as missionaries. Because the Boston-based American Board of Commissioners for Foreign Missions (ABCFM), which sponsored the Hawaiian mission, initially required all missionaries to be married, some serious matchmaking was required. In the month before they were to sail, four weddings took place in various Massachusetts towns. In each case, the newlyweds had not known each other before they heard of the proposed mission, but all were committed to the cause and confident that their matches were the result of divine intervention.

"You are to aim at nothing short of covering those islands with fruitful fields and pleasant dwellings, and schools and churches; of raising up the whole people to an elevated state of Christian civilization."

The family, friends, and supporters who gathered on the wharf that October afternoon knew it was unlikely they would ever see their loved ones again. At the end of their 18,000-mile journey, the missionaries were expected to become permanent residents of Hawaii — indeed, they were required to give up their U.S. citizenship to settle there. If they were successful in their work, they would spend the rest of their lives unimaginably far from home. Their charge from the ABCFM was daunting: "You are to aim at nothing short of covering those islands with fruitful fields and pleasant dwellings, and schools and churches; of raising up the whole people to an elevated state of Christian civilization."

The voyage was difficult. The ship was cramped, the missionaries were seasick, and by the middle of the trip, four of the wives were pregnant. The couples spent as much time as they could learning the Hawaiian language and sharing tales of missionary successes in other "heathen lands."

In late March of 1820, after five months at sea, the big island of Hawaii came into view. The missionaries were shocked by their first encounters with the native people. When the Thaddeus anchored, the ship was greeted by men and women of all ages, some surfing, others sailing, and others dancing or running along the shore.

They were completely uninterested in most things the Americans considered important, chiefly farming, sewing, and cooking . . .

The missionaries set to work building New England-style frame houses and a church, creating a reading primer in Hawaiian and translating the Bible and other texts into the native language, setting up schools, preaching Christian teachings, and providing basic medical care. The Hawaiians were accustomed to going without clothing and to gathering their food and fish from the wild. They were completely uninterested in most things the Americans considered important, chiefly farming, sewing, and cooking, but with traditional Hawaiian religion already in decline, the missionaries made headway in spreading Christianity.

Over the next 30 years, another 180 men and women of various Christian denominations would come to Hawaii as missionaries. Of the first group, one couple stayed seven years, another 15; a few spent the rest of their lives in Hawaii.

Papers of the American Board of Commissioners for Foreign Missions are held by Harvard University's Houghton Library and the Congregational Library and Archives.