The design of this Grammatical institute is to furnish schools in this country with an easy, accurate and comprehensive system of rules and lessons for teaching the English language.

To frame a complete system upon such an extensive plan, it was judged requisite to compile a small cheap volume for the use of beginners, containing words methodically arranged, sufficient to give the learner a just idea of spelling.

Among the defects and absurdities found in the books of this kind hitherto used, we may rank the want of a thorough investigation of the sounds in the English language, and the powers of the several letters—the promiscuous arrangement of words in the same table, in which the same letters have several different sounds—the unnatural and arbitrary method of dividing syllables, which separates letters from the syllables where they belong, supplying the defect by artificial marks, and which, in several hundred words, makes more syllables than are pronounced—and particularly the omission of a criterion by which the various sounds of the vowels may be distinguished.

In attempting to correct these faults, it was necessary to begin with the elements of the language, and explain the powers of the letters. With regard to some of them, the opinions of Grammarians are divided; but perhaps the definitions given in the analysis, of the terms vowel, diphthong, and consonant, will establish an almost infallible rule for the decision of every question respecting the alphabet.

The Index or Key to the pronunciation of the vowels and diphthongs, appears to me sufficiently plain, and so accurate as to prevent every material error. A more accurate plan may be formed; but it must be too intricate to be useful in common schools.

Preface to the 1800 edition of The American Spelling Book, by Noah Webster.

"Copyright" on the name Webster

True. What happened was that the copyright on Noah Webster's first dictionary ran out. Other publishers were able to reprint it and create their own derivative works. The courts ruled that they were able to use the Webster name for such editions, which led to the name being used ubiquitously.
Daniel Webster? No! Noah Webster

On this day in 1847, Charles and George Merriam of Springfield published the first edition of The American Dictionary of the English Language. Four years earlier, the brothers had decided to take a major risk. The great lexicographer Noah Webster had just died, leaving behind a large stock of expensive, unsold dictionaries. They purchased the books and the right to publish any revisions. Priced at $6.00, the new, shorter edition was an immediate success. Massachusetts ordered a copy for every school in the state. Building on Noah Webster's original idea that the American nation needed a dictionary that reflected its distinctive use of the English language, Merriam-Webster's has been setting the standards for American English for the past 150 years.

His book included and so legitimated distinctly American words such as "skunk," "squash," "hickory," and "chowder." 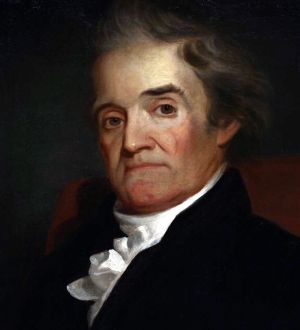 A schoolboy was once introduced to the great orator Daniel Webster and told to shake hands. The spunky lad looked up at Webster and asked, "Are you the man who wrote the book with so many horrid spelling lessons? If so, I don't want to shake your hand!" Like so many people, the boy had confused the orator Daniel Webster with the lexicographer Noah Webster. It was Noah, not Daniel, who wrote the book that was the standard speller for generations of Americans — and the bane of so many school children. Noah followed the speller with a dictionary so popular that the name "Webster's" became synonymous with dictionary.

Noah Webster was a Connecticut man, born in West Hartford and educated at Yale. Growing up during the Revolution, he was fired with the ideals of democracy and nationhood. After the war, he became a schoolteacher and dreamed, in the words of historian Henry Steele Commager, of becoming "schoolmaster to the nation." His goal was not just to educate young Americans but to foster in them a commitment to a democratic national culture.

"Are you the man who wrote the book with so many horrid spelling lessons? If so, I don't want to shake your hand!"

His first project was to develop a standardized, distinctly American language. There was little regularity in the way words were spelled, even by well-educated men and women. Benjamin Franklin once sniffed that he "had no use for a man with but one spelling for a word."

But Webster saw the issue as an important one for a new nation. In his speller, traditional English spellings such as "colour" and "musick" were replaced with the simpler "color" and "music." His book included and so legitimated distinctly American words such as "skunk," "squash," "hickory," and "chowder." He changed many spellings to make them more phonetic, convinced that simpler spelling would help unify a diverse people. He hoped that standard spelling would eliminate regional differences in pronunciation. The first edition of his "blue backed speller" was published in 1783. It was an instant bestseller and a fixture in American classrooms well into the late nineteenth century.

In 1800 Noah Webster proposed to compile a "Dictionary of the American Language" that would reflect "the considerable differences between the American and English languages." The idea met with scorn. Critics made fun of the "Nue Merrykin Dikshunary," insisting it was "perfectly absurd to talk of the American language."

Critics made fun of the "Nue Merrykin Dikshunary," insisting it was "perfectly absurd to talk of the American language."

Webster was undeterred. Over the next quarter century, he produced a work that included over 70,000 words with their origins. To escape what he called the "dissipations and expenditures" of New Haven, in 1812 he moved his family to Amherst, Massachusetts, where he remained for the next decade. There in the quiet college town, he worked on the mammoth, two-volume American Dictionary of the English Language.

By the time it was completed in 1828, the dictionary was greeted with respect, even reverence. But it was not a commercial success. The price tag was astronomical for those times — $15 to $20 — and the book sold poorly. When Webster died in 1843, he left behind a large stock of unsold volumes. Springfield printers Charles and George Merriam saw an opportunity. The brothers acquired the rights to Webster's dictionary. They planned to produce a low-cost edition, which they believed would sell well in a nation that placed increasing value on literacy.

They were right. The Merriam brothers became rich men. The publishing tradition they began has continued uninterrupted through 13 editions of the dictionary.

When the book was updated in 1961, The Atlantic Monthly called it "a calamity," while the New York Times accused the publisher of "betraying the public trust" and "lowering the standards of language."

When the copyright expired on the name "Webster" in the late nineteenth century, other publishers rushed to put the name on their dictionaries. Merriam went to court to compel companies using "Webster" to disclaim any connection to the original publisher. In 1982 the company officially changed its name from C. & G. Merriam to Merriam-Webster Inc. to draw attention to its ties to Noah Webster.

The Merriam-Webster editorial board has long acted as the arbiter of correct American English, deciding which words and spellings would be included in the dictionary. This process has not been free from controversy. When the book was updated in 1961, The Atlantic Monthly called it "a calamity," while the New York Times accused the publisher of "betraying the public trust" and "lowering the standards of language." But the editors at Merriam insisted that dictionaries should not dictate the development of language but accept its natural evolution and record its actual use. Merriam's editorial policy has made the Springfield-based dictionary a truly American reference. Noah Webster would be pleased.

"Noah's Mark: Webster and the Original Dictionary Wars," by Jill Lepore in the New Yorker, November 6, 2006.

"My Father's History and Family," by Homer Merriam; a history of the Merriam family printers of Brookfield, from the collections of Old Sturbridge Village.

A Is for American: Letters and Other Characters in the Newly United States, by Jill Lepore (Knopf, 2002).

On this day in 1722, the Boston paper The Courant first published a letter from a widow with a keen wit and a gift for satire. Every few weeks, another letter from "Silence Dogood" appeared....

On this day in 1758, 4,500 British troops under the command of Jeffrey Amherst camped on Boston Common before setting off to fight the French. Newly promoted to Major-General, Amherst had recently engineered an important...

On this day in 1857, the first issue of The Atlantic Monthly magazine was published in Boston. Although none of the articles was signed, most readers easily recognized the work of such New England luminaries...