In February 1916,Dr. Parker appeared before a Senate committee looking into the care of patients with Hansen's disease. In preparation, he wrote a report summarizing his experience on Penikese and the difficulty of retaining staff in such an isolated setting. Experience has shown that the chief obstacle to continuity of service is the solitude, and this applies to the nurses and attendants as well as to those who do not come into contact with the patients. From the hill on Penikese one may look away to the mainland or may see the small white houses upon Cuttyhunk. In clear weather the smokestacks in New Bedford show red in the sun.

It is not surprising that the temper of gregarious man cannot long endure it. Solitude may be precious by way of change; it is deadly when change is lacking. A constant sameness saps the sweetness from the best personality, ruffles the gentlest temper and tends to create petty jealousies and feuds in miniature. And so it is with Penikese. . . In all, since the beginning there have been 87 different regular employes at the island, even though the average number employed at any one time during that period has not exceeded 10. . .

To the heavy-hearted patient the doctor represents a community that without just cause has found him in a distress not of his own doing; has taken from him his liberty - his sole possession remaining; and has cast him out to the elements. No earnest care, no tenderness can compensate him for that act. Society has made him its enemy. . ."

Rules for the hospital:

"It began to be apparent to the Board that a hospital for the care and treatment of the most dreaded disease known to mankind must, especially when located as remotely as Penikese, inevitably tend ever to become less and less an hospital and more and more a mere dumping ground for persons cast out from society and shunned by all men. . . The hard position of the patient has been fully recognized. He is confined against his will. He may not go among his fellow men. He is denied all that life held dear. In this plight the board is firm in its determination that he shall not be exploited nor made an exhibition of. As a result of this determination, visitation of the hospital is confined to officials, bona fide students, relatives and friends. The merely curious are obliged to stay away. Furthermore, visitors are not permitted to bring cameras upon the island, and no photographs of patients are permitted except for the purpose of medical record. Neither may the name of any patient be used or his identity revealed without his full consent. From this point of view of the journalist these rules seem unduly severe. From the point of view of the exile they are no more than just, no less than kind.

Quoted in "The Exiles of Penikese Island: Politics, Prejudice and the Public Healthy" by Paul Cyr in Spinner, Vol. III (1984).

Most people who have battled not only this disease, but the associated stigma that is still rampant, are deeply offended by the term "leper." The term has an intensely negative connotation that defines a person by their disease rather than by other characteristics that make them unique individuals. Other disease terms, like "diabetic" or "asthmatic," are not plagued by such stigma. The stigma has very real and negative consequences: in many places it still prevents people from seeking medical attention and from completing necessary treatment. Until we eliminate the stigma associated with leprosy, it will continue to be a problem.
Type

"...and send them [to] live out their lives..."
Probition against photos

How did Dr Parker prevent those on passing ships from taking photos. Once Mr Thomas arrived he could make a request to passing ships but he would have no way of enforcing it.
Login

On this day in 1905, five leprosy patients arrived on Penikese Island in Buzzard's Bay, the site of the first and only leprosarium in Massachusetts. Over the next 16 years, 36 victims of leprosy, or Hansen's disease, lived on the isolated island, along with a handful of caregivers. Dr. Frank Parker and his wife, Marion, went to great lengths to make the patients comfortable, providing good food, fresh air, exercise, entertainment, and nursing, but it was nearly impossible to overcome the stigma and social ostracism associated with leprosy. Still, the island produced stories of great courage, kindness, and fortitude. The colony closed when the federal government opened a leprosy hospital in Louisiana.

Leprosy was practically unheard of in Massachusetts until the last quarter of the nineteenth century. 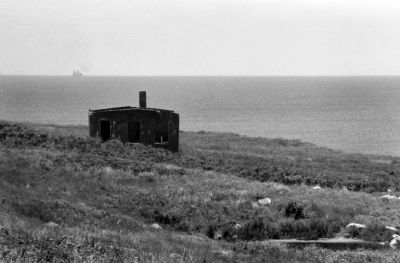 Leprosy, a contagious and incurable disease that causes lesions, deformities, and if untreated by modern drugs, death, has been known and feared since ancient times. For generations, patients suffered not only from physical debilitation, but from the misconception that the disease was caused by uncleanliness. Until the discovery of antibiotics, which effectively control the disease, it was public policy to remove people with leprosy from their homes and communities and send them live out their lives in quarantined settings like the one on Penikese Island, located 12 miles off Cape Cod.

Leprosy was practically unheard of in Massachusetts until the last quarter of the nineteenth century, when increased immigration brought people from countries where the disease was more prevalent. Even then, the number of reported cases was low. Since 95% of the population is naturally immune to the disease, it spread slowly. Still, residents were terrified by the thought that there was even one leper in their midst. Officials deported any newcomers found to have the disease and confined other victims to poorhouse attics or quarantine centers in Boston. By 1904, when the number of reported cases reached double-digits, the state decided it had to create an isolated facility to care for people with leprosy.

People on the mainland protested vigorously that the presence of lepers would "damage their vested interests," but this time the state held firm. 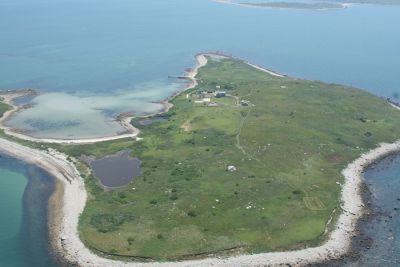 Initial proposals met stiff resistance. The first plan was to send patients to the State Infirmary in Tewksbury. The Infirmary trustees fiercely resisted, refusing to "consent to such transfers, thereby exposing 1,500 to 1,800 inmates . . . to that much dreaded disease." In December, the Commonwealth bought a farm in Brewster to use as a leprosy hospital, but the plan was dropped in the face of intense opposition from Cape Codders. The public meeting called to discuss the matter was the most heavily attended in the state's history; so many people traveled from the Cape to Boston that the railroad added a special train.

Finally, in July of 1905, the state purchased Penikese Island in Buzzard's Bay. People on the mainland protested vigorously that the presence of these patients would "damage their vested interests," but this time the state held firm.

For two years in the 1870s, Harvard had used the island to conduct a natural history summer school. When the state took it over, workmen converted school buildings into residences for the director, farmer-boatman, housekeeper, and male and female attendants who made up the paid staff. On the west side of the island, or "the other side" as it came to be called, four one-story cottages were built for the patients.

Dr. Parker went to extraordinary lengths to see that the patients had whatever they desired, from special foods to private gardens.

On November 18th, without ceremony, the first patients arrived: two Chinese men, two Cape Verdean men, and a Cape Verdean woman. Their number increased temporarily in March when the woman gave birth to a baby; 20 days later, the healthy infant was shipped to the mainland.

The first physician resigned after two years, when he could not tolerate living in such isolation. In his place came the remarkable Frank and Marion Parker. Dr. Parker had practiced medicine in Malden for 22 years; his wife had been prominent in social and charitable circles there. Enthusiastic and devoted to their charges, they transformed daily life on the island. The couple realized that their patients were "prisoners in effect, but not criminals" and did their best to improve their lot. Dr. Parker went to extraordinary lengths to see that the patients had whatever they desired, from special foods to private gardens.

To build their self-esteem, he gave them paying jobs so they could purchase personal items from stores in New Bedford. To protect the patients' dignity, he prohibited visitors or those passing on ships from gawking or taking photographs. Marion equipped the leprosarium with radios, record players, books, and magazines and led religious services herself until she found a clergyman willing to come to the island.

By sharing news from the Marconi News Service and communicating with operators on other islands and on passing ships, Archie gave the Penikese residents their only contact with "ordinary people."

One of the better-known residents of Penikese was 16-year-old Archie Thomas, who arrived in 1912. Newspapers widely reported the story of his widowed but healthy mother who chose to go into isolation with her only child. A bright boy with an interest in physics and electricity, he received a two-way radio from the New Bedford Women's Society. By sharing news from the Marconi News Service and communicating with operators on other islands and on passing ships, Archie gave the Penikese residents their only contact with "ordinary people." When Archie died in 1915, the news was slow to reach the mainland — no one else knew how to use his radio.

Over the years, the average number of patients living on the island was 14; the inmate population peaked at 17 in the mid 1910s. By 1921, when the U.S. government established a national leprosarium in Louisiana, there were two women and 11 men remaining in the Massachusetts colony. They traveled by tugboat to New Bedford (where the local paper reported that "the morbidly curious . . . gathered around the hospital car while the lepers were making their way to it"), then by hospital train to Louisiana. The Parkers remained behind to disinfect the island and look for another situation. Hospitals were fearful of their long exposure to leprosy and would not employ them. They had no better luck rebuilding a private practice. After six months, they were forced to leave Massachusetts to live with their son in Montana.

The state put Penikese up for sale. But concern about contagion was so strong that no buyers were found. Finally in 1924, officials decided to raze the buildings and make the island into a bird sanctuary. More than 50 years later, the island became another sort of sanctuary — for troubled teenagers and most recently for people recovering from addiction.

"The Exiles of Penikese Island: Politics, Prejudice and the Public Health," by Paul Cyr in Spinner, 1984.

Penikese: Island of Hope, by I. Thomas Buckley (Published by the author, 1997).