LEGAL SEAFOODS HAD NO FRILLS, BUT THEY LOVED IT

For some, Legal Seafoods at Inman Square was the type of place to show out-of-towners the "real Cambridge." It was reminiscent of another time with its tanks full of live lobsters, sawdust on the floor downstairs and a bustling fish market right in the middle of everything….

The fire that destroyed the restaurant early yesterday also destroyed the charm that was Legal Seafoods at 237 Hampshire St. and many will miss it. It was undetermined how it started, but within 20 minutes, the fire within the two-story building was uncontrollable. Damage was estimated at $150,000….

Last night at a private gathering at the new downtown Boston restaurant, several people spoke of the fire in Cambridge… .

Many of the women attending last night's party wore furs that looked like they had not been bought in second-hand stores. Clients to Legal Sea Foods in Cambridge leaned more toward down jackets and ratty furs.

Harold Schectman, a Fitchburg physician, alluded to that, and to the fact that the Park Plaza restaurant will have separate tables:

"The other place was where you could get good food. People were grouped together. Here you get a certain type of privacy, you're catering to a whole different type of people," he said….

Legal Seafoods was well-known outside of Boston. [Owner] George Berkowitz said he would regularly send actress Carol Channing fresh fish. "She had to have three ounces every couple of hours. When she was traveling, for years, we would supply her with it."

On this day in 1980, fire destroyed the original Legal Sea Foods fish market and restaurant in Cambridge. The restaurant re-opened, but the business soon outgrew the neighborhood. Today there are 30 family-owned Legal Sea Foods restaurants. All bear the same incongruous name, which goes back to the company's roots. In 1904, Harry Berkowitz called his Inman Square store Legal Cash Market because his customers could redeem legal, government-issued cash stamps there. When his son branched out into fish, he kept the "legal" name. Now his grandson runs the company out of a 75,000-square-foot headquarters overlooking Boston Harbor. On the roof sits a 45-foot-long stainless steel sculpture of a New England cod.

The 45-foot flying fish sculpture on the roof of Legal Sea Foods' headquarters also measures wind direction and speed, which change the orientation of the fish scales and eye color. 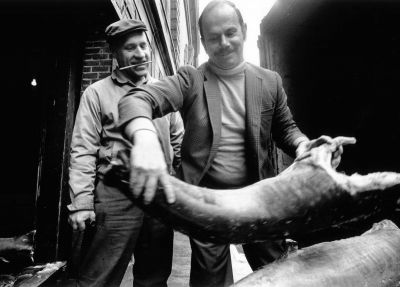 1980 was the best and worst of times for Legal Sea Foods of Cambridge. Business was booming and the 30-year-old company was two weeks away from opening a big new restaurant at the Park Plaza Hotel in downtown Boston.

Then, early in the morning of January 16th, fire broke out at the fish market/restaurant/oyster bar in Inman Square. By the time the fire was extinguished, the building was a total loss. The next day, patrons, employees, and neighbors stood near the smoldering ruins and lamented the demise of a Cambridge institution.

"My brother would see something on somebody's plate that we were sitting next to and he would ask if he could try it," she recalled. "Where else could you do that? To me, Legal Sea Foods was Cambridge."

A local teacher remembered watching Legal Sea Foods grow from a hole-in-the-wall that served only fried fish to a full-service restaurant with a national reputation. Legal's owners, the Berkowitz family, had preserved the no-frills, informal atmosphere; it remained a homey Cambridge gathering place. "My brother would see something on somebody's plate that we were sitting next to and he would ask if he could try it," she recalled. "Where else could you do that? To me, Legal Sea Foods was Cambridge."

The original restaurant was gone, but in the next quarter century, Legal Sea Foods would grow into a chain with 11 locations in the Greater Boston area, and 19 more from Massachusetts to Florida.

While the company has capitalized on its unusual moniker with the motto, "If it's not fresh, it's not Legal!" the origin of the name actually predates the family's fish business by nearly half a century.

While the company has capitalized on its unusual moniker with the motto, "If it's not fresh, it's not Legal!" the origin of the name actually predates the family's fish business by nearly half a century. In 1904, Harry Berkowitz opened a grocery store that redeemed legal, government-issued cash stamps, the forerunners to S&H Green Stamps. He called it Legal Cash Market. In the 1940s, Harry's son George added a fish counter. In 1950, he put in a fish market next door, and he kept the Legal name to maintain the store's identity.

For many years, George Berkowitz sold fresh fish and take-out fish and chips from his modest establishment. His son Roger, who became the the company's President and CEO in 1992, worked in the market as a teenager. He remembered that "for much of the '50s and '60s, fish was not that popular." Roger recalled that when Pope Paul VI allowed Catholics to eat meat on Fridays in the early 1960s, his father took an insurance course to prepare for a possible career change.

When Julia Child reported to the nation that she patronized Legal Sea Foods, the business really took off.

It was Roger's mother Harriet Berkowitz who suggested a less drastic change. In 1968 the family took over a vacant space next door to the market and opened a fish restaurant. The dining experience was the ultimate in no-frills: meals were served at picnic tables, with white paper plates instead of china, plastic cutlery instead of silverware. But no one complained; the fish was superb. When Julia Child reported to the nation that she patronized Legal Sea Foods, the business really took off.

During the 1970s and 1980s, Americans' growing interest in the health benefits of fish and an increase in the popularity of raw Asian sushi, which puts a premium on quality and freshness, further boosted the company's growth. Legal Sea Foods now serves 10,000 meals a day, 363 days a year, and offers fish by mail order and online. Its trademark chowder has been featured at every presidential inauguration since 1981.To mark its 50th birthday in 2000, the company purchased the Lady Grace. Moored in Gloucester harbor, the fishing boat serves as a floating memorial to fishermen who have lost their lives at sea. The "flying fish" sculpture on the roof of the company's Quality Control Center has also become an icon in Boston Harbor. The 45-foot sculpture created by Boston artist David Tonnesen measures wind direction and speed, which change the orientation of the fish scales and eye color.