THE AUTOCRAT OF THE BREAKFAST-TABLE

EVERY MAN HIS OWN BOSWELL

I was just going to say, when I was interrupted, that one of the many ways of classifying minds is under the heads of arithmetical and algebraical intellects. All economical and practical wisdom is an extension or variation of the following arithmetical formula: 2+2=4. Every philosophical proposition has the more general character of the expression a+b=c. We are mere operatives, empirics, and egotists, until we learn to think in letters instead of figures.

They all stared. There is a divinity student lately come among us to whom I commonly address remarks like the above, allowing him to take a certain share in the conversation, so far as assent or pertinent questions are involved. He abused his liberty on this occasion by presuming to say that Leibnitz had the same observation.—No, sir, I replied, he has not. But he said a mightily good thing about mathematics, that sounds something like it, and you found it, not in the original, but quoted by Dr. Thomas Reid. I will tell the company what he did say, one of these days.

—If I belong to a Society of Mutual Admiration?—I blush to say that I do not at this present moment. I once did, however. It was the first association to which I ever heard the term applied; a body of scientific young men in a great foreign city who admired their teacher, and to some extent each other. Many of them deserved it; they have become famous since. . . .

"none of the articles was signed" (were signed)
Login

On this day in 1857, the first issue of The Atlantic Monthly magazine was published in Boston. Although none of the articles was signed, most readers easily recognized the work of such New England luminaries as Ralph Waldo Emerson, Henry Wadsworth Longfellow, and Harriet Beecher Stowe. The writers, poets, and philosophers who launched the new journal believed that, as the intellectual elite of New England, they had a mission to create not just a magazine but a culture — a distinctly American literary culture. Their goal was to cast "the light of the highest morals" on an increasingly fragmented, mobile, and materialistic country. Almost a century and a half later, The Atlantic Monthly remains one of the nation's and the world's leading literary journals.

Martin Luther King sent a handwritten draft to The Atlantic, written behind bars, of what would come to be known as his "Letter From a Birmingham Jail." 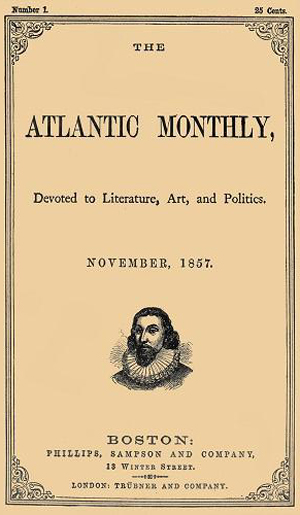 In 1853 an energetic and idealistic young publisher's assistant named Frank Underwood began promoting the concept of a new magazine. Deeply committed to the anti-slavery movement, Underwood sought to enlist New England's literary elite in an effort to promote the cause of abolition.

Underwood was not the first person to propose a New England literary magazine. Boston-area intellectuals had been championing the idea for years. The Concord-based Transcendentalist journal The Dial had enjoyed a brief run earlier in the century. But by the 1850s, there was a growing feeling among writers in and around Boston that New England, as the center of an emerging American culture, was well positioned — indeed, obliged — to provide leadership to the nation.

Underwood's proposal for a journal that would promote both literary culture and the cause of abolition garnered support. A group of writers from the Boston area met occasionally at Boston's Parker House Hotel to discuss the idea and offered to contribute their work to the new magazine. Once he had enough material for the first issue, Underwood approached his employer, book publisher Moses Phillips.

A star-struck Phillips later wrote to his niece, "Imagine your uncle at the head of such guests. . . It was the richest time intellectually by all odds that I have ever had." 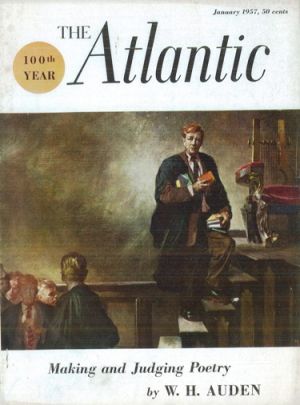 Well aware that similar efforts had failed, businessman Phillips was initially unenthusiastic. To persuade him, Underwood invited Phillips to a dinner at the Parker House. The guests included some of the best minds in New England -- perhaps in the country -- including Emerson, Longfellow, and Oliver Wendell Holmes. A star-struck Phillips later wrote to his niece, "Imagine your uncle at the head of such guests. . . It was the richest time intellectually by all odds that I have ever had." He agreed to publish the magazine, and James Russell Lowell signed on as editor.

Although The Atlantic would later distinguish itself as a promoter of new literary voices, it was primarily the work of the Yankee cultural establishment that filled the early volumes — Emerson and Hawthorne from Concord, Longfellow and Lowell from Cambridge, Holmes from Boston, and a few from farther afield, such as the North Shore's John Greenleaf Whittier and Andover's Stowe. These writers welcomed the opportunity to reach a wide audience, but they had another goal as well: to create and promote what one editor called a "high American literary culture."

Concerned about the potential for "cultural leveling" inherent in a democratic system, the founders of The Atlantic Monthly believed fervently that the educated minority must provide cultural leadership. They sought to balance reflection with action; individual freedom with social responsibility. As one of them later remarked, "That New England was appointed to guide the nation, to civilize it, to humanize it, none of [us] doubted."

"That New England was appointed to guide the nation, to civilize it, to humanize it, none of [us] doubted."

Billing itself as a "journal of literature, politics, science, and the arts," the magazine was an immediate success. Circulation grew rapidly, reaching 30,000 within two years. Although the editors' anti-slavery politics made The Atlantic unpopular in the South, subscribers throughout the Northeast and Midwest eagerly awaited the arrival of each issue of the magazine.

Over time, the editors reached out to new talent as well as to well-established figures, a practice that continues today. Ernest Hemingway's first story appeared in the magazine, for example, and in a 1994 essay, managing editor Cullen Murphy noted that the magazine "saw the first stories into print of Mark Twain [and] Henry James. . . . It was to The Atlantic Monthly that a little-known writer named James Dickey came when he had something called Deliverance that he wanted to publish. . . . Martin Luther King sent a handwritten draft to us, written behind bars, of what would come to be known as his 'Letter From a Birmingham Jail,' which we published in 1963. The Atlantic Monthly is where Felix Frankfurter, in 1927, spoke out in behalf of Sacco and Vanzetti. It was the platform chosen by Al Smith, that same year, to assert the competence of a Catholic to run for national office."

As it celebrated its centennial in 1957, the magazine had 250,000 paid subscribers. The number has continued to grow, with another 50,000 copies sold on newsstands every month. In 2005 the publisher announced that the magazine would leave Boston. In early 2006, after 148 years in Boston, The Atlantic moved to Washington, D.C.

Several sites related to The Atlantic Monthly are included in the Boston Literary District.

"A History of the Atlantic Monthly," by Cullen Murphy, 2001.

A History of the Atlantic Monthly 1857-1907: Yankee Humanism at High Tide and Ebb, by Ellery Sedgwick (University of Massachusetts Press, 1994).

On this day in 1809, Oliver Wendell Holmes was born in Cambridge. The man who coined the phrase "Boston Brahmin," he was a true member of that class, and he entertained the nation with poems,...

On this day in 1892, the poet John Greenleaf Whittier died at the age of 85. He had come a long way from his Quaker boyhood on a struggling farm in Haverhill. He began writing...