The object of the game is to put the ball into your opponent's goal. This may be done by throwing the ball from any part of the grounds, with one or two hands, under the following conditions and rules.

1. The ball may be thrown in any direction with one or both hands.

2. The ball may be batted in any direction with one or both hands.

3. A player cannot run with the ball. The player must throw it from the spot on which he catches it, allowances to be made for a man who catches the ball when running if he tries to stop.

4. The ball must be held by the hands. The arms or body must not be used for holding it.

5. No shouldering, holding, pushing, tripping or striking in any way the person of an opponent shall be allowed; the first infringement of this rule by any player shall come as a foul, the second shall disqualify him until the next goal is made, or, if there was evident intent to injure the person, for the whole of the game, no substitute allowed.

6. A foul is striking the ball with the fist, violation of Rules 3, 4, and such as described in Rule 5.

8. A goal shall be made when the ball is thrown or batted from the grounds into the basket and stays there, providing those defending the goal do no touch or disturb the goal. If the ball rests on the edges, and the opponent moves the basket, it shall count as a goal.

9. When the ball goes out of bounds, it shall be thrown into the field of play by the person touching it. He has a right to hold it unmolested for five seconds. In case of a dispute the umpire shall throw it straight into the field. The thrower-in is allowed five seconds; if he holds it longer it shall go to the opponent. If any side persists in delaying the game the umpire shall call a foul on that side.

10. The umpire shall be the judge of the men and shall note the fouls and notify the referee when three consecutive fouls have been made. He shall have power to disqualify men according to Rule 5.

11. The referee shall be judge of the ball and shall decide when the ball is in play, in bounds, to which side it belongs, and shall keep the time. He shall decide when a goal has been made and keep account of the goals, with any other duties that are usually performed by a referee.

12. The time shall be two fifteen-minute halves, with five minutes rest between.

13. The side making the most goals in that time shall be declared the winner. In the case of a draw the game may, by agreement of the captains, be continued until another goal is made.

From Springfield College: Where Basketball Was Invented

On this day in 1891, the first game of basketball was played at what is now Springfield College. The game was invented by a Canadian, Dr. James Naismith, a versatile athlete, theologian, and physical education instructor, who envisioned "the time when Christian people would recognize the true value of athletics." He designed basketball to occupy a class of disagreeable male students at the Springfield YMCA, who were bored with the calisthenics and children's games in their gym class. The game attracted players and fans almost immediately. By 1936, basketball was included among the sports at the Olympic Games and is now played in 170 countries. The Naismith Memorial Basketball Hall of Fame opened in Springfield in 1968. 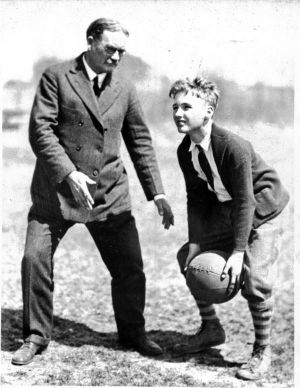 James Naismith was born in 1861 in rural Ontario. Orphaned at eight, he lived with an uncle, helping with farm work and spending what free time he had with a group of local boys. They wrestled, swung from tree limbs, and played "duck on the rock," a game in which one boy placed a stone on top of a big rock and guarded his "duck" while the others tried to knock it off by throwing stones. This game would later play an important part in the origin of basketball.

In 1883 Naismith entered McGill University in Montreal to study philosophy and theology. He was an active participant in college sports, playing soccer, rugby, lacrosse, and football (British rugby), never missing a game, even though football was thought to be "a tool of the devil," not proper for a "theolog."

During one particularly competitive game of football, Naismith had an epiphany that would change the direction of his life. He later remembered that the player next to him "encountered some difficulty, and losing his temper, made some remarks that, though forceful, are unprintable." Composing himself, the player whispered an apology. The incident made such an impression on Naismith that he became committed to the idea that physical training could be a means of spreading Christianity.

Naismith was an active participant in college sports, playing soccer, rugby, lacrosse, and football (British rugby), never missing a game, even though football was thought to be "a tool of the devil," not proper for a "theolog."

After graduating from McGill in 1887, Naismith earned a graduate degree in theology. Seeking to combine his athletic talent with his calling to the ministry, he learned that the Young Men's Christian Association (YMCA) was developing "physical training programs to supplement interests in Bible study, education and social welfare." The School for Christian Workers (later the International YMCA Training School, now Springfield College) in Springfield, Massachusetts, was the site of the first course offered for YMCA physical directors.

Naismith enrolled in the training school for the 1890-1891 academic year. He stayed on to teach boxing, wrestling, swimming, and canoeing. Midway through the term, the faculty encountered a problem with a class of men who were preparing to be YMCA administrators. They were required to take an hour of gym class every day; when the weather turned cold, they were "increasingly bored and irritated by the winter regimen of calisthenics, gymnastics, and children's games such as Prisoner's Base."

"What this generation wanted," wrote Naismith, who at 30 was about the same age as the discontented students, "was pleasure and thrill rather than physical benefits." The head of the department assigned Naismith to "the class of incorrigibles."

They were required to take an hour of gym class every day; when the weather turned cold, they were "increasingly bored and irritated by the winter regimen of calisthenics, gymnastics, and children's games such as Prisoner's Base."

Naismith first tried modifying football, soccer, and lacrosse for indoor play but found that the results were "either too tame or too rough." He began to devise an entirely new indoor ball game. There could be no tackling on a hard gym floor, so the alternative to running with the ball would be to pass it. The scoring system drew on "duck on the rock." In that game, the best players threw the rock in an arc so that it bounced near the duck even if it did not actually hit it. This allowed another turn rather than elimination. Naismith also came up with the idea of a "horizontal goal." He mounted a box at either end of the floor well above the players' heads, so even the best defense could be overcome. Each time the ball entered the box, it would count as a goal.

On December 21, 1891, Naismith nailed a peach basket to the lower rail of the balcony, ten feet off the floor, at either end of the gym. He posted a typed list of 13 rules on the bulletin board and selected two men to be the captains. After they chose sides, Naismith tossed a soccer ball up between the two centers. As he later wrote, "it was the start of the first basketball game and the finish of the trouble with that class."

"it was the start of the first basketball game and the finish of the trouble with that class."

Within weeks, some 200 people were coming to the Springfield Y to watch the daily noontime games. When the students returned home for Christmas vacation, they took the game with them. Basketball quickly spread throughout the U.S. It was not long before international students ensured the popularity of the new game overseas.

Cylindrical wire baskets soon replaced the peach boxes, and in 1894 basketballs were introduced. Three years later, the teams were fixed at five men each, and the first professional league — the six-team National Basketball League — was formed. High schools and amateur athletic clubs embraced the game, and in 1905 the National Collegiate Athletic Association formally recognized it as a permanent winter sport.

James Naismith left Springfield in 1895 to become the physical director of the Denver YMCA. Always an avid student, he earned a medical degree from Gross Medical College in 1898. He did not practice medicine but spent the next 39 years as professor of physical education and chapel director at the University of Kansas. He coached the basketball team there for nine seasons. During World War I, he served for 19 months with a YMCA unit in France. James Naismith died on November 29, 1939, at the age of 78.

The Naismith Memorial Basketball Hall of Fame in Springfield.

A statue of James Naismith can be found on the campus of Springfield College.

On this day in 1884, Harry Haskell Lew was born in Lowell to a family that had long been active in the struggle for racial equality. Known from childhood as "Bucky," he made his mark...