TONGUES IS A CENTENARIAN

ESPERANTO VIVAS: AFTER ALL THESE YEARS

One's first impulse is to dismiss Esperanto as a wacky but harmless cause, like the Flat Earth Society or the defenders of Lizzie Borden. Only about 6,000 Americans speak the artificial language, and most of them, according to Esperanto teacher David Jordan, are "nerdy teen-age boys," the types who play Dungeons and Dragons and break into Defense Department computers. Jokes about Esperanto leap to mind: It's the USA Today of languages; it's trying to compete with English, but it's still losing to Berlitz.

And yet, in the Slater International Center at Wellesley College last Wednesday night sat 15 Americans and 20 visitors from Poland, exchanging news and gossip in their common tongue -- Esperanto. Together they ate a traditional New England meal of pektensupo (clam chowder), fazeoloj bakitaj (baked beans), and pomtorto (apple pie) and agreed that Ludwig Zamenhof's vision of world communication through one neutral, easily accessible language would yet come true. In the company of these pragmatic doctors, lawyers and teachers, the dream seemed so rational that one could almost believe it.

"I studied French for four years, and when I went to France, I couldn't understand anyone," said John Cunningham, a computer programmer from Millis, who brought his 13-month-old son Brandon to the dinner and periodically whispered Esperanto endearments to him. "Then I saw an Esperanto translation of 'Winnie the Pooh' in a bookstore, and I was intrigued. I taught it to myself in four months, and I understood it the first time I heard it."

Esperanto is to languages what basketball is to sports; each was invented, while their competitors developed naturally. Exactly 100 years after Zamenhof, a Polish oculist, published his first text under the pseudonym Dr. Esperanto, his creation is still eking out a precarious existence on the fringe of the linguistic world, a quasi-religious crusade to its followers, a curiosity to the rest of humanity. The best estimates suggest that between 1 million and 2 million people speak Esperanto, ranking it next to Icelandic in popularity.

In all probability, this ingenious blend of Indo-European tongues will never be widely spoken, but still it has displayed surprising hardiness and flexibility. From Cold War to glasnost, it has persisted on both sides of the Iron Curtain. . . .

Those interested in some of the enduring legacies of Esperanto might enjoy the 1965 horror film 'Incubus,' starring William Shatner. It's the second full-length movie scripted entirely in Esperanto, and probably the most blogged about. This blog has some YouTube footage of the film, so you can hear Shatner's inimitable interpretation.
Movies in Esperanto

In addition to a few movies in Esperanto I wrote an article about Music in Esperanto. Hundreds of musicians have performed in Esperanto. A complete article appears at my Blog. www.EsprerantoFriends.blogspot.com For short videos in and about Esperanto numerous exist at YOUTUBE. ------------------------- Via the article on Esperanto I was attracted to this website. Since I go to a Unitarian Church, a movement headquartered in Boston, I hold special thoughts for Boston and Massachusetts.
We're still here!

If you are interested in more info about Esperanto, or want to meet real live Esperantists at our weekly Waltham meeting, contact me (massmoments@dwolff.users.panix.com). About two million people speak Esperanto today, and you can learn it much faster than other languages. It's an excellent introduction to other foreign languages and helps students learn about geography, other cultures, and history.
Login

On this day in 1905, the first Esperanto Society in the United States was established in Boston. Invented by a Polish doctor in the 1880s, Esperanto was an entirely new language created to promote international communication. With its simple grammar and phonetic spelling, Esperanto was easy to learn. It was soon adopted by large numbers of people in Central Europe, where many different languages were spoken in a relatively small geographic area. Boston in the early 1900s was full of intellectuals and scientists who found the idea of an international language appealing. Although it never gained widespread popularity in the U.S., it is spoken by more than two million people around the world.

Some 30,000 works — including novels and poetry — have been written in Esperanto. 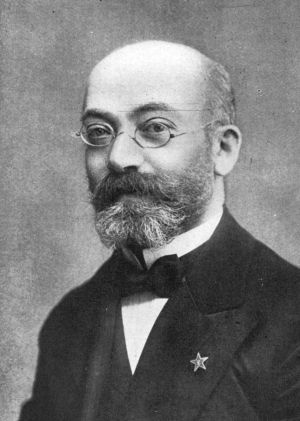 On this day in 1905, the first Esperanto Society in the United States was established in Boston. Invented by a Polish doctor in the 1880s, Esperanto was an entirely new language created to promote international communication. With its simple grammar and phonetic spelling, Esperanto was easy to learn.

It was soon adopted by large numbers of people in Central Europe, where many different languages were spoken in a relatively small geographic area. Boston in the early 1900s was full of intellectuals and scientists who found the idea of an international language appealing. Although it never gained widespread popularity in the U.S., today it is spoken by more than 2,000,000 people in 86 countries.

One hundred years ago, Boston led the nation in establishing the first Esperanto Society in the United States; within a year, the city boasted two clubs. The MIT paper reported in 1906 that the new language was "growing rapidly in public favor. . . . It is thought by many," the article continued, "that this language will eventually be adopted by the entire Christian world."

Boston had just the right mix of multi-lingual immigrants, idealistic intellectuals, and scientists enthusiastic about the mathematical elegance of an invented form of communication. A planned language without ties to any one nation or ethnic group, Esperanto first emerged in Europe in the 1880s as part of a movement to promote a universal culture.

Esperanto was the invention of Dr. Ludwig L. Zamenhof, an idealistic and imaginative optometrist from the Russo-Polish city of Bialystok. Residents of Bialystok spoke Russian, Polish, German, and Yiddish. He believed that sharing a common language would make it easier for people to get along with one another.

"that this language will eventually be adopted by the entire Christian world." 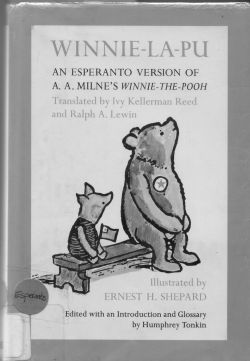 Recognizing that such a language needed to be culturally neutral and easy to learn, he spent years devising a language with simple, regular grammar, phonetic spelling, and genderless nouns. In 1887 he presented his work in a modest little book titled Dr. Esperanto's International Language. For his pseudonym — and for the name of the new language — he created the word, Esperanto, which means "he who hopes."

Zamenhof's timing was good. At the end of the nineteenth century, more and more people were thinking in global terms. Steamship travel and telegraph lines shortened distances between regions of the world. New organizations, such as the International Red Cross, the Young Men's Christian Association, the Salvation Army, and the Olympics reflected this trend.

The MIT paper observed that "as international commerce continues to grow, a common form of speech becomes more necessary. No one international language could be successfully used by all nations. . . . the element of jealousy is too strong to allow it." Esperanto offered travelers, businessmen, and scientists a practical alternative to mastering the 3,000 different languages used around the world.

Within a few years, "Dr. Esperanto's" book was translated into Polish, French, German, and English. Esperanto spread rapidly, and by 1905 several hundred speakers from around the world attended the first International Congress of Esperanto speakers.

"as international commerce continues to grow, a common form of speech becomes more necessary. No one international language could be successfully used by all nations. . . . the element of jealousy is too strong to allow it."

After World War I, Esperanto speakers almost succeeded in having their language chosen as the official language of the League of Nations. Ten of the eleven delegates to the League voted for the proposal. France blocked the move, fearing that Esperanto would undermine the position of French as the language of international diplomacy.

The French were not the only ones to view Esperanto as a threat. Hitler claimed it had been created to unite Jews of the diaspora in a plot to dominate the world. Stalin called Esperanto "the language of spies." Both men persecuted Esperanto speakers.

During the McCarthy Era, American speakers of Esperanto had to defend the movement against the charge that that its links with Eastern Europe reflected the influence of Communism.

Esperanto survived these years of adversity. It remains extremely popular in Central Europe. As one Esperanto speaker pointed out, in a part of the world where a person might "travel 100 miles in any direction . . . and need to speak some other language to be understood, it's very practical to have a common language. For obvious political reasons, most people there certainly didn't want it to be Russian."

In the last decade, interest in Esperanto has grown dramatically in China, where more than half the world's Esperanto speakers now live. By the late 1980s, about 400,000 Chinese had enrolled in Esperanto courses. Chinese radio broadcasts programs in Esperanto, and an Esperanto magazine published in the People's Republic is read worldwide.

After World War I, Esperanto speakers almost succeeded in having their language chosen as the official language of the League of Nations.

An international convention in Warsaw in July of 1986 drew 6,000 delegates from 64 countries to mark Esperanto's centennial. A Polish rock band performed a rendition in Esperanto of Stevie Wonder's "I Just Called to Say I Love You."

Gatherings of Esperanto speakers can be found in Massachusetts, more than one hundred years after the first Esperanto Society was  formed. The Allan C. Boschen Esperanto collection at the University of Massachusetts--Amherst is a rich source of printed material in and about the language.

Esperanto has never gained the popularity here that it has in other parts of the world. One local speaker suggests that most Americans do not understand the need for a neutral, universal language. He points out, however, that those who travel abroad "are always sure of finding someone who can speak their language."

Esperanto in the Internet Age

On this day in 1847, Charles and George Merriam of Springfield published the first edition of The American Dictionary of the English Language. Four years earlier, the brothers had decided to take a major risk....