Not to quibble, but the current method of snow-making from the ground with water-fed "guns" seems very different from the methods described here. A sentence or two making clearer distinctions would be helpful.
Typo

"...when cold water contacts particle of dust, salt, or sand." Not a great precipitation explanation, but at least make "particle" be "particles."
Login

On this day in 1946, an airplane flew over Mount Greylock in western Massachusetts and seeded the clouds with super-cooled ice crystals. The first-ever artificially-produced snow melted before it hit the slopes below, but the event created a national sensation. It marked the first field test of scientist Vincent Schaefer's laboratory experiments in which he produced precipitation by adding dry ice to lower the temperature of a chilled chamber. Although some people protested that tampering with nature might not be safe or proper, within three years ski resorts in the U.S. were experimenting with snowmaking. By 1952 the first snowmaking machinery was in regular use at a Catskill ski resort. Today, virtually every American ski area produces artificial snow, and snowmaking is a multi-million dollar global business.

He combined his knowledge of hard science with his love of the outdoors to co-author two Peterson Field Guides, Atmosphere and Clouds and Weather, which naturalists still consider the standard works on the subject. 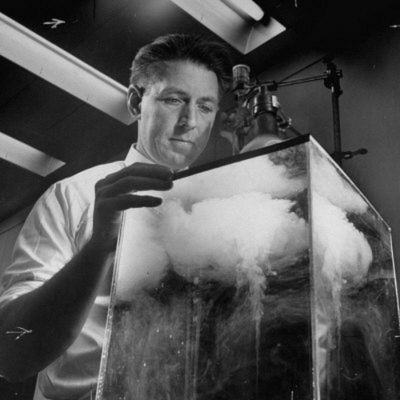 Like so many other scientific advances, the invention of artificial snow had its roots in wartime. During World War II, scientists at the General Electric Research Laboratory were studying how to use smoke generators to make artificial fog that could be used to conceal ships at sea. This work eventually led Nobel Prize-winning scientist Irving Langmuir and his research associate, Vincent Schaefer, to conduct laboratory experiments on the physics of cloud formation. Building on his wartime research, Schaefer went on explore how he could seed clouds to produce artificial snow.

Born in Schenectady, New York, in 1906, Vincent Schaefer left high school to help support his family. Self-educated from that point on, he read extensively and acquired years of hands-on experience as a naturalist. Recognizing Schaefer's talent, Langmuir invited him to join the GE workshop in 1932 and introduced Schaefer to the world of surface chemistry. Schaefer brought together his intimate knowledge of the natural world with what Langmuir taught him about chemistry.

In 1936 scientists at a university in Japan announced that they had produced the first artificial snow crystal in a laboratory. The feat caught the popular imagination, and the race was on to find a way to create artificial snow in large quantities.

In 1936 scientists at a university in Japan announced that they had produced the first artificial snow crystal in a laboratory. The feat caught the popular imagination, and the race was on to find a way to create artificial snow in large quantities. In 1940 with Langmuir's encouragement, Schaefer developed a method for making replicas of individual snowflakes using a thin plastic coating. Suddenly Vincent Schaefer was famous in his own right, featured in popular magazines and followed by the media.

When war broke out, Schaefer refocused his research on aircraft icing, ice nuclei, and cloud physics. He and Langmuir carried out many of their experiments at the Mount Washington Observatory in New Hampshire. After the war, Langmuir encouraged Schaefer to continue his work on creating artificial clouds in the laboratory. One day, as Schaefer was attempting to create an artificial cloud in a chilled chamber, he thought the chamber was too warm for the experiment to succeed. So he put some dry ice inside to lower the temperature of the chamber. Water vapor formed around the dry ice. Schaefer had inadvertently reproduced nature's way of making rain drops and snow crystals.

While Schaefer's accomplishment brought him fame, controversy over the safety and ethics of interfering with nature followed.

Schaeffer soon found a way to transfer the laboratory process to the real world. In the summer of 1946, he developed a method to seed super-cooled clouds with dry ice. Flying over Mt. Greylock on November 13, 1946, he successfully seeded a natural cloud to produce the first artificial snow.

While Schaefer's accomplishment brought him fame, controversy over the safety and ethics of interfering with nature followed. But scientists working on weather modification were enthusiastic, as were companies that saw profit in snowmaking. Today, snowmaking is big business. But the process is expensive. Covering an acre with snow a foot deep costs $2,700, plus $25,000 per acre for the machinery.

Vincent Schaefer continued his successful career in surface and cloud physics. He combined his knowledge of hard science with his love of the outdoors to co-author two Peterson Field Guides, Atmosphere and Clouds and Weather, which naturalists still consider the standard works on the subject.

Mt. Greylock State Reservation is a popular location for skiing, hiking, and other recreational activities.

Vincent Schaefer Papers at the State University of New York at Albany.