This is a quote from a letter from Louisa Hill on February 11, 1852 which I have in my possession. She was a student at Mount Holyoke Academy. "The 14th of February is at hand, and many of the girls were intending to send Valentines, but Miss Chapin spoiled their fun, by saying "that in an institution of this character, it was not to be expected they would allow any such thing," and she "therefore requested those who had thought of any such thing to do nothing of the kind," and when she speaks so, it is the same as a command not to do it. I had to leave off just now to attend to some callers. We have a great deal too much company and I do not know how to account for it, for Miss Bogue nor I, either of us, return any calls but we have somebody here almost every day."
valentines at Mt. Holyoke Academy

Wonderful primary source! Thanks for sharing it.
Something does not compute here

Here is what Susan Fenimore Cooper wrote in Rural Hours, published in 1850. Now unless the Valentines entry was added for the later 1887 printing, it would seem that Valentines were very common before the date suggested earlier. Wednesday, 14th. ý Cold day. Quite a rosy flush on the lake, or rather on the ice and snow which cover it; there are at times singular effects of light and shade upon the lake at this season, when passing clouds throw a shadow upon it, and give to the broad white field very much the look of gray water. It is St. Valentineýs day, and valentines by the thousand are passing through the post-offices all over the country. Within the last few years, the number of these letters is said to have become really astonishing; we heard that 20,000 passed through the New York post-office last year, but one cannot vouch for the precise number. They are going out of favor now, however, having been much abused of late years. The old Dutch colonists had a singular way of keeping this holiday; Judge Benson gives an account of it. It was called Vrouwen-Dagh, or womanýs day. ýEvery motherýs daughter,ý says the Judge, ýwas furnished with a piece of cord, the size neither too large nor too small; the twist neither too hard nor too loose; a turn round the hand, and then a due length left to serve as a lash.ý On the morning of this Vrouwen-Dagh, the little girls ý and some large ones, too, probably, for the fun of the thing ý sallied out, armed with just such a cord, and every luckless wight of a lad that was met received three or four strokes from this feminine lash. It was not ýconsidered fair to have a knot, but fair to practice a few days to acquire the sleight.ý The boys, of course, passed the day in a state of more anxiety than they now do under the auspices of St. Valentine; ýnever venturing to turn a corner without first listening whether no warblers were behind it.ý One can imagine that there must have been some fun on the occasion, to the lookers-on especially; but a strange custom it was. We have never heard of anything like it elsewhere. The boys insisted that the next day should be theirs, and be called Mannen-Dagh, manýs day, ýbut my masters were told the law would thereby defeat its own purpose, which was, that they should, at an age, and in a way most likely never to forget it, receive the lesson of Manliness, never to strike.ý As the lesson has been well learnt by the stronger sex in this part of the world, it is quite as well, perhaps, that the custom should drop, and Vrouwen-Dagh be forgotten. But after this, who shall say that our Dutch ancestors were not a chivalrous race?
Login

On this day in 1849, the first American-made valentines were sold in Worcester. They were designed and made by Esther Howland, the daughter of a local stationer. After graduating from Mt. Holyoke College, she returned to Worcester and began making valentines modeled on a fancy one she had received from an English friend. Her brother took the samples on a sales trip and came home with an astonishing $5,000 worth of orders. Howland began by hiring her friends to assemble the valentines; within a few years, she built her business into a $100,000 a year enterprise, a notable success for any entrepreneur but a truly remarkable accomplishment for a nineteenth-century woman.

Highly elaborate and personalized valentines — with ribbon trimmings, pages of artistic illustrations, hidden doors, and sometimes an inner envelope for a secret love message, lock of hair, or ring — could sell for as much as $50, equivalent to the cost of a horse drawn buggy! 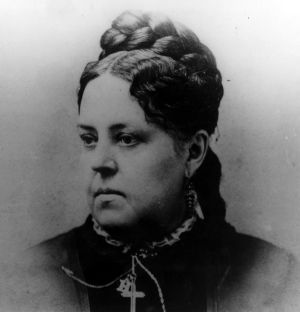 When Esther Howland was growing up in the 1830s, it seemed unlikely she would make her mark as "The Mother of the American Valentine."

Her father owned the largest book and stationery store in Worcester. His success allowed him to send Esther to Mount Holyoke Female Seminary. At Mt. Holyoke, Esther participated in annual Valentine festivities (later banned by the college for being too frivolous). Shortly after she completed her studies in 1847, one of her father's business associates happened to send her an elaborate English valentine.

German immigrants to the U.S. had brought with them a tradition of cutting paper hearts for loved ones, and in the first half of the nineteenth century, other Americans were beginning to exchange simple cards on which they wrote their own sentimental verses.

But English valentines were entirely different. The Industrial Revolution began in England several decades before it did in the U.S.; English factories mass-produced intricately detailed paper, which could be embossed with flowers and adorned with perforated paper lace. These fancy valentines were extremely expensive to import, so very few circulated in the United States.

In only a few years, her creativity and skill turned a nascent cultural phenomena — the celebration of romantic love — into a booming business.

Esther Howland guessed correctly that the growing emphasis on romantic love made America an untapped market for English-style valentines. She was confident that, given the right materials, she could copy the English designs. Esther Howland invented what was essentially a new industry. In only a few years, her creativity and skill turned a nascent cultural phenomena — the celebration of romantic love — into a booming business.

She knew that the key to the fancy valentine was fancy paper. Esther asked her stationer father to import some embossed and perforated lacy paper for her. He did, and in 1849 she made 12 sample valentines. Her brother took them along on his next sales trip. She hoped she might receive $200 in orders and was taken by surprise when her brother returned with orders worth 25 times that amount for fancy valentines.

Esther Howland was determined to meet the demand. She had envisioned a small home-based business appropriate for an unmarried lady, but she soon revised her plan. She recruited a group of her friends to work out of her home as "assemblers." She also distributed boxes of supplies with one finished sample as a guide to women who preferred to assemble the valentines in their own homes.

She introduced countless variations, including multiple layers of paper or lift-up flaps, and accordion-like folds that elevated one portion of the design and created a shadowbox effect.

When she was satisfied that she could turn out valentines in quantity, Howland began to establish her business. She placed advertisements in local papers and took orders through her family's stationery shop. When her activities outgrew her family's house, she moved the operation to a rented building in downtown Worcester.

It was Esther Howland's unique designs that separated her valentines from those of the competitors who soon flattered her with imitation. She introduced countless variations, including multiple layers of paper or lift-up flaps, and accordion-like folds that elevated one portion of the design and created a shadowbox effect. She pioneered the use of colored paper wafers set beneath different sections of the perforated paper and overlaid embossed flowers.

To capitalize on the Victorians' feeling that romantic sentiments were private and should be kept secret, Esther Howland created separate sheets with a variety of "mottos" that could be pasted inside the card. She published a book of 131 different verses that dealers could use to help customers personalize their valentines.

An astute businesswoman, she developed valentines for all budgets.

An astute businesswoman, she developed valentines for all budgets. Her simpler cards started at five cents, but highly elaborate and personalized valentines — with ribbon trimmings, pages of artistic illustrations, hidden doors, and sometimes an inner envelope for a secret love message, lock of hair, or ring — could sell for as much as $50, equivalent to the cost of a horse drawn buggy! By making — and spending the money to advertise — a high-quality product in a wide range of prices, Esther Howland built the New England Valentine Company into a flourishing business.

To care for her ailing father, in 1881 Esther Howland sold out to another Worcester stationer, who was already producing machine-cut valentines and who added a line of cards in the "Howland Style." Worcester remained the "Valentine Capital of America" well into the twentieth century.

The Library of the Worcester Historical Museum has several collections that include Esther Howland valentines and cards made by her successors in the city.

“Mother of the Valentine”: Esther Howland, Worcester, and the American Valentine Industry, Past is Present: American Antiquarian Society Blog.