On June 11 1837, a Great Riot [occurred] in Broad Street. It commenced between an engine company returning from a fire, and an Irish funeral procession. It has not been satisfactorily ascertained which party were the aggressors. The tumult increased to such a degree, that nearly a thousand persons, at one time, were supposed to be engaged in a brawl, the most desperate that ever occurred in this city. Several houses were broken into, furniture shattered inside, and cast into the street. Beds were ripped open and their contents given to the winds. Sticks, stones, bricks, and all manner of missiles, were discharged by the combatants at each other, with the utmost ferocity and yet, strange to tell, no one was killed in the affray. The military was called out, and in a strong body marched to the scene of action, and in a short time the rioters were dispensed or captured. Crowds were sent off to the Police Court; and at length, after the proper authorities had sifted the whole affair, it resulted in the sending of John Whaley for four months, and John Welsh and Barney Fanning each two months, at hard labor, in the House of Correction.

On June 15th 1837, seventeen persons, concerned in the Broad Street Riot, [were] ordered to recognize the sum of $300, [and] to appear at the next term of the Municipal Court. One American was held to bail, Mark Adams, a truck man, against whom the witnesses testified they saw him aiding in the sacking of the houses.

On June 18th 1837, the city [was] very quiet since last Monday morning. A military force was stationed at Faneuil Hall today (Sunday), to protect the armories, etc., and to act in case any disturbance should take place. Many Irishmen flock in from Lowell and other places.Their motives unknown.As the engines were returning from a fire in South Boston, some of the companies were assailed by hissing, hooting, etc. Many attempts were made during the day to kick up a row.

Immigration reform is one of the concluding topics for this school year. Thanks so much for helping to remind us all of the response of Bostonians to other immigrant peoples not so long ago! YP ------------------------- Yvonne Powell
Boston Immigrants

Very timely. I am reading The Given Day by Dennis Lehane which gives a good picture of Boston at the end of WW1 and a police department dominated primarily by the Irish.
Login

On this day in 1837, an Irish funeral procession and a company of Yankee volunteer firefighters came face-to-face in the streets of Boston. Over the next few hours, the two groups and their supporters fought each other in one of the most violent confrontations in the city's history. It ended only when the mayor called out the state militia. Amazingly, no one was killed, but many people on both sides were seriously injured, and property damage was extensive. What caused such enmity between the Irish mourners and the firemen? Different religious traditions, fear born of ignorance, but above all, intense competition for jobs as unskilled laborers. The competition — and the antagonism — would only grow worse when famine sent huge numbers of impoverished Irish to Boston in the 1840s.

Many regarded Catholics' allegiance to the Pope as a threat to American independence. 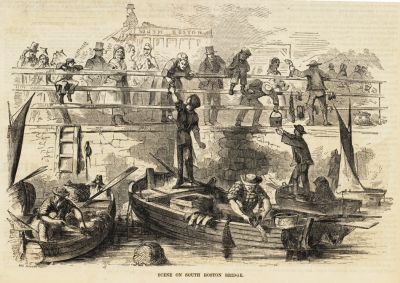 The 1830s were a difficult time for the Irish in Boston. They had settled in dilapidated buildings near the waterfront and along Broad and Ann Streets. Many native-born Bostonians viewed them, even in their poverty, as undermining the religious, political, and economic status quo.

Large numbers of Irish had first arrived in the 1820s; the city was in a building boom and easily absorbed the new workers. But when the Irish population more than tripled in one decade — from 2,000 in 1820 to 7,000 in 1830 — Boston's Yankees began to fear that the immigrants would overrun them.

The native-born Protestants who had long dominated Massachusetts found the Irish especially alien and alarming. The fact that these newcomers were Catholics stirred Yankee fears of the religion their Puritan ancestors had long ago rejected. Many regarded Catholics' allegiance to the Pope as a threat to American independence. Some even believed that large Catholic families were the result of a papal conspiracy to take over the New World.

In 1825 confrontations along the waterfront became so common that the mayor stationed six constables in the district from 10 pm until sunrise to keep the peace.

Boston's political elite had other reasons to resent the Irish. Most Irish identified with Jacksonian appeals to the "common man" and with Andrew Jackson himself, who made much of his Irish lineage. By supporting Jackson's campaign, the Boston Irish helped him defeat Massachusetts' native son, John Quincy Adams, in the 1828 presidential race.

Religion and politics were powerful factors, but "the Irish problem" also had a moral dimension. The poor sanitation, overcrowded tenements, and inadequate nutrition that characterized life in the "Irish Quarter" of Boston and other large cities fed anti-immigrant prejudice. In the days before the discovery of germ theory, diseases that inevitably spread in densely populated poor neighborhoods were thought to be caused not by the conditions in which people were forced to live but by their lack of moral standards.

But of all the Bostonians who felt threatened by the Irish immigrants, the most vulnerable were the unskilled laborers who competed with the newcomers for work. Tension between native and Irish laborers began in the early 1820s. In 1825 confrontations along the waterfront became so common that the mayor stationed six constables in the district from 10 pm until sunrise to keep the peace.

For several years this effort had the intended effect, but after 1830, as Boston's newspapers, ministers, politicians, and public speakers began to wage an all-out campaign of anti-Irish denunciation, confrontation seemed inevitable. When it came, it was no surprise that it involved an Irish funeral.

citing concern for "the future health, security and improvement of the town," they voted to prohibit "the dead bodies of a particular class of people, brought from the city of Boston."

Around 1830 with the Irish Catholic burying ground in Boston reaching capacity, Bishop Benedict Fenwick bought a new cemetery lot in Charlestown, near a church and convent that had recently been established there. No sooner did the Charlestown selectmen learn of the purchase then, citing concern for "the future health, security and improvement of the town," they voted to prohibit "the dead bodies of a particular class of people, brought from the city of Boston."

The people of Charlestown feared that the Irish would bring disease along with their dead. But they also objected to the way the Irish behaved at funerals, events that often lasted for several days and included drinking, dancing, keening (women singing an ancient Gaelic chant), and storytelling. The court eventually overruled the selectmen, but dislike of Irish funeral customs only intensified.

It was also no surprise that firemen played a decisive role in the confrontation. Boston's volunteer fire companies were notoriously competitive — the company that arrived first at a fire was entitled to payment from the city — and had a well-deserved reputation for rowdiness. By the 1830s many members of these companies came from the group of laborers who competed with the Irish for jobs. The Irish, for their part, had reason to resent the firemen: a disastrous fire had destroyed the Charlestown convent three years earlier; many Irish believed it had been purposely set by the firemen, who had then refused to put it out.

For two hours, an all-out battle raged as men attacked each other with sticks, stones, bricks, and cudgels.

On Sunday, June 11, 1837, the two groups collided, literally. An Irish funeral procession with 400-500 mourners encountered a fire company returning from a blaze. A shoving match quickly escalated into a brawl; the firemen rang their bells to call for assistance from other companies. A newspaper reported one fireman racing from firehouse to firehouse exclaiming, "The Irish have risen upon us, and are going to kill us!" More than 700 firemen arrived on the scene; friends and relatives soon poured onto Broad St. to support the Irish mourners.

The fighting intensified as the Irish moved toward their homes on Broad Street. For two hours, an all-out battle raged as men attacked each other with sticks, stones, bricks, and cudgels. After overpowering the Irish, the Yankees looted and vandalized their homes and burned the district to the ground. It took 800 armed troops to disperse the crowds and restore order.

A grand jury indicted 14 Irishmen and four Yankees for rioting. At the trial an all-Yankee jury found the Irish men guilty and the Yankees innocent.

Within months, the mayor announced the creation of a professional fire department, bringing to an end the volunteer companies' long tradition of unruliness. It was not so easy to diffuse the tension between the city's native-born Protestants and the immigrant Irish, a tension that would last well into the twentieth century.

Boston Catholics: A History of the Church and Its People, by Thomas H. O'Connor (Northeastern University Press, 1998).

On this day in 1713, more than 200 people rioted on Boston Common over the high price of bread. The lieutenant governor tried to intervene but was shot and wounded for his efforts. This was...