More than 1,000 persons were evacuated Saturday before a roaring forest fire, which threatened to envelop the 12,000 acre Myles Standish State Reservation was put under control at 10:30 pm.

Spread out a two-mile front, the fire was halted at Upper College Pond Road and Halfway Pond Road where a sixth attempt at a backfire proved successful.

Fire officials then began to retrace the perimeter with bulldozers and brush breakers. They feared that if they did not break down the perimeter fires, a second-day blaze might break out.

Arthur H. Lamb, chief of the Plymouth fire department, which responded to 12 forest fires on Saturday, said, "The number of fires here the past few weeks (15 to 20) leads us to believe that Saturday's fire was a malicious one."

The law enforcement agency of the State Conservation department ordered an investigation.

On this day in 1964, a raging wildfire crossed the boundaries of Myles Standish State Forest, and into the town of Plymouth. Two days earlier flames had consumed 800 acres of the forest, but firefighters believed they had the blaze under control. On the 25th, the wind shifted, and with terrifying speed, the re-ignited fire moved from west to east, destroying everything in its path. It stopped only when it reached White Island Pond. Fifty-five hundred acres and 26 structures had been destroyed. This was the last of many large fires to ravage Myles Standish State Forest in the twentieth century. Since the 1960s, rapid development surrounding the Forest has led foresters to develop a new tool for preventing fires; they intentionally set them.

Any fire will open up an area to new vegetation, but fires that burn at a certain speed encourage the re-growth of certain grasses. 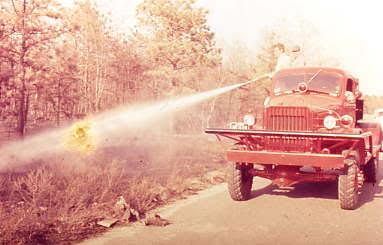 A century ago, the Massachusetts legislature created the office of State Forester. The job included the prevention and control of forest fires. It is unlikely that the foresters of the early 1900s ever envisioned a time when their successors would be setting fires as a way of preventing them.

In the years after the Civil War, logging in Massachusetts was completely unregulated. Forest land was not reseeded, and it often became "scrub land" — large tracts of scrub, brush, and "unproductive" trees, such as grey birches and scrub oak. In addition, loggers left behind the tops of felled trees. By 1913 experts estimated that Massachusetts had 1,000,000 acres of "waste land" — land that was not only unprofitable and unsightly but a serious fire hazard. With an almost endless supply of dry vegetation, wildfires could burn out of control for days.

The mainland of southeastern Massachusetts, Cape Cod, and the Elizabeth Islands are especially prone to fires. Among the only trees that thrive in this region's sandy soil are pitch pine and scrub oak; both species are susceptible to fire but pitch pine's resin-rich needles are especially so. With the added fuel from ground covered with dried pinecones, needles, leaves, and twigs, these forests can produce some of the fastest-moving fires in the country.

On the other hand, fire-adapted species like pitch pine and scrub oak readily regenerate after a forest fire. Scrub oak sprouts quickly, and pitch pines conceal dormant buds beneath the bark near the base of their trunks; the buds form shoots even after a severe fire.

By 1913 experts estimated that Massachusetts had 1,000,000 acres of "waste land" — land that was not only unprofitable and unsightly but a serious fire hazard.

Fires have swept through Myles Standish State Forest (MSSF) many times since the state first purchased the land in Plymouth and Carver in 1916. Naturalists have analyzed pollen cores from ponds in the forest and found layers of charcoal between layers of sediment, scientific proof of what common sense and Indian lore tell us — fires have been part of the natural cycle here for millennia. There were, of course, fires sparked by lightning, but there were also fires started by the Native people who populated the area. Sometimes the goal was simply to create fields for planting; other times it was to open up the forest so that berries and other sun-loving plants would thrive. The plants provided food but they also improved the hunting by attracting deer and other animals.

Only since English settlement of the area have forest fires been seen as a threat to be contained. In the twentieth century, more and more resources were directed at fire prevention. State and federal officials launched education programs featuring Smokey Bear and began publicizing a classification system for fire danger. A network of access roads was created through woodlands, fire towers were built at key vantage points to help with early detection, and firefighting equipment improved rapidly.

. . . fires have been part of the natural cycle here for millennia.

But conflagrations still occurred. Seven years before the 1964 fire, an even more destructive blaze started on the Carver side of the forest. It raged out of control for two days. Like any huge wildfire, flames arched across roads, and embers blew across ponds. Sixty-four communities sent 2,500 men to battle the blaze. But nothing could stop the 40- to 50-foot-high wall of flame that consumed 15,000 acres on its way to the Atlantic Ocean.

In recent decades, there has been intense residential development surrounding state forests and parks. Dozens of structures were lost in the 1957 and 1964 fires. Today, even a medium-size wildfire in southeastern Massachusetts would likely destroy hundreds of homes and possibly result in loss of life.

Fire departments are better trained and respond more quickly. Cell phones allow members of the public to become fire spotters. In the 1980s and 90s, no large fires escaped suppression at Myles Standish. As a result, in the past quarter century a mature forest has grown up in some parts of MSSF. Taller trees help reduce the flammable understory and with it the fuel fire needs to spread, but there are still large areas full of extremely hazardous fuel.

Wildfires continue to pose a serious risk to the public, and land managers have added what they call "prescribed burns" to their firefighting tools. They began in 1998 with a small test at Myles Standish. The experiment was successful, and after some initial controversy, controlled fires are now widely used in the region.

Like any huge wildfire, flames arched across roads, and embers blew across ponds.

Prescribed burns have two main advantages: they reduce the likelihood of wildfires and they promote ecological balance. By intentionally burning vegetation that acts as fuel, firefighters can greatly reduce the chance of a wildfire taking hold. They can limit prescribed fires to times when conditions are optimal, for example in the wet months of early spring and on a day when the wind direction and speed are both favorable.

Prescribed fires also have ecological benefits. Naturalists have learned that different fires produce different results. Any fire will open up an area to new vegetation, but fires that burn at a certain speed encourage the re-growth of certain grasses. Other fires promote different plant species.

Controlled forest fires are meticulously planned and executed with a full array of high tech telecommunications and firefighting equipment including National Guard helicopters, ready to drop large quantities of water. In 2004 approximately 1,000 acres of conservation land in southeastern Massachusetts was burned this way. Land managers and residents alike hope that prescribed fires will help prevent the kind of devastation seen at Myles Standish in May of 1964.

Interviews with James Rassman, Management Forester, Dept. of Conservation and Recreation, Region I, February 11 and 16, 2005.

On this day in 1965, Massachusetts officials burned what was left of the wooden tramway that had carried thousands of people to the summit of Mt. Holyoke. Abandoned for decades, the deteriorating tramway was a...