Fred Elijah Coffin wrote about his experience in the Great Fire in a series of articles he published in 1912.

After the fire became well started and was forcing its way in three or four directions, it seemed as though it might, at any time, start directly up Main Street, and if so our house would go. At that time my father came to me — and I never before saw him so seriously in earnest — and said, "Fred, will you stand by me tonight?" I said, "Yes, I will!" And the old gentleman knew he could depend on me. We had no horse and it would have been impossible to find one that night, so my father obtained a large porter's push-cart and with that we transferred many loads of household goods to the premises of an uncle in the upper part of the town, but before the early daybreak it was evident that the fire was in control…

…One of the peculiar incidents of that wild night was the rare sight of the harbor on fire. Many barrels of whale oil on the wharves had burst, and their contents flowed out over the water of the harbor and there, taking fire, presented the grand spectacle of the sea on fire…"

Reprinted in "The Great Fire of 1846," by Edouard A. Stockpile, in Proceedings of the Nantucket Historical Association, 1946.

On this day in 1846, a fire began in a hat store on Nantucket's Main Street. In no time, it raced through town, consuming everything in its path. Barrels of whale oil were stored on the wharves; when the fire reached them, they burst into flames. The burning oil flowed into the water, creating what one man described as "a sea of fire." Seven hours later most of the town's commercial area lay in ashes. Some 250 buildings had been destroyed — almost all the markets and shops, seven factories that processed whale oil, a dozen warehouses, three of the town's four wharves, and many homes. The fire had lasting consequences: it contributed to the demise of Nantucket as the world capital of the whaling industry.

In 1775 the island had a fleet of 150 whalers, generally 90 to 180-ton ships that sailed as far south as the Falkland Islands off Argentina. 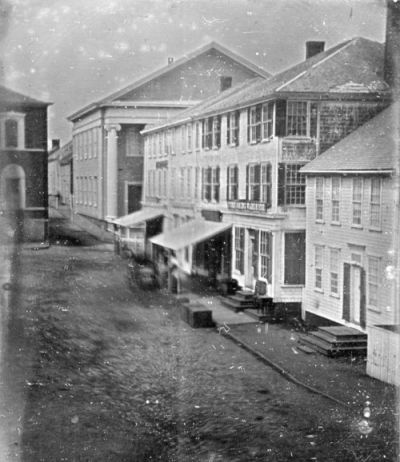 The worst fire in Nantucket's history began in a defective stovepipe at 11 o'clock at night. Within an hour, it was burning out of control. When dawn broke the next day, fully one-third of the town had been destroyed. Approximately 800 people were homeless. Total losses were in excess of $1,000,000 (the equivalent of approximately $24,000,000 today).

Within days, the selectmen issued an appeal for aid: "There is not food enough in town to keep widespread suffering from hunger at bay a single week . . . We are in deep trouble. . . Provisions, Clothing, Bedding, Money — anything useful you may have to bestow, will be most gratefully received." Donations poured in. Fall River residents sent over a steamboat with cash and several thousand dollars' worth of food and clothing. Citizens of Boston contributed $15,000. Chelsea, Westfield, Salem, Medford — all came to the islanders' aid.

Among the most painful losses was the Atheneum Library and Museum. Incorporated in 1834, it had been a prominent symbol of the prosperity and sophistication that whaling brought to the island. It hosted some of the best speakers in the country — Ralph Waldo Emerson, Henry David Thoreau, William Lloyd Garrison, John James Audubon, and Frederick Douglass, among them.

Within days, the selectmen issued an appeal for aid: "There is not food enough in town to keep widespread suffering from hunger at bay a single week . . ." 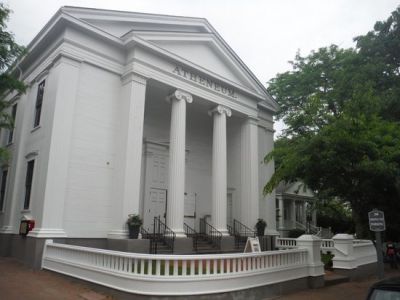 The Atheneum had also housed old documents and a collection of whaling materials and artifacts that Nantucketers had carried home from all over the world. The conflagration not only destroyed these treasures, but even more damaging, it helped bring about the end of Nantucket's preeminence in the whaling industry.

From 1750 to 1850, whaling was the heart of Nantucket's economy. For the first four decades of the nineteenth century, the town was the undisputed whaling capital of the world, with more than 70 ships that ventured on two- to three-year whaling trips to the Pacific.

Commercial whaling on Nantucket began late in the seventeenth century. When English colonists arrived on the island 30 miles off Cape Cod in 1659, they found more than 2,500 Wampanoag Indians living there. The Englishmen quickly discovered that the sandy soil of the narrow island could not support their farming practices, and they turned to the sea.

Their first experience with the value of whales took place on shore. At first they simply cut up the carcasses of right whales that washed up on the beaches. They cut off the blubber and extracted the oil by boiling it in tryworks erected just above the high tide line. In 1672 they recruited whalers from off island to teach them how to capture and kill whales that were swimming close to shore.

For the first four decades of the nineteenth century, the town was the undisputed whaling capital of the world, with more than 70 ships that ventured on two- to three-year whaling trips to the Pacific.

According to tradition, in 1712 a gale blew a Nantucket captain out to sea, where he came upon a pod of sperm whales. One had washed ashore a few years earlier, and so islanders knew how rich a prize a sperm whale was. Not only was the sperm whale much larger, but its oil was far more valuable than that of other species. The captain killed the whale and towed it in to port, thus marking the beginning of the industry for which Nantucket would become famous.

Whalemen built larger vessels and, as demand grew and the supply in New England waters began to decline, they traveled ever longer distances in pursuit of sperm whales. In 1775 the island had a fleet of 150 whalers, generally 90 to 180-ton ships that sailed as far south as the Falkland Islands off Argentina. On the eve of the Revolution, Nantucket was the third largest town in Massachusetts Bay Colony; only Boston and Salem were larger.

Both the Revolutionary War and the War of 1812 brought whaling to a virtual halt, but Nantucket businessmen were cautious Quakers. They weathered the interruptions and in the first half of the nineteenth century the industry reaped greater profits than ever, making Nantucket one of the wealthiest communities in the country. On a typical day, 15 to 20 whaleships were tied up at Nantucket's four long wharves.

Thanks to years of benign neglect followed by an active preservation effort, more than 800 houses built before the Civil War still stand; almost all of them have been restored.

As the mid-century mark approached, however, the island's glory days were coming to an end. Ever-shifting sandbars made access to the harbor a perennial problem; this became more serious as whaling vessels grew larger. In time the harbor began to fill up with silt. This coincided with the California Gold Rush, which offered young men the promise (rarely fulfilled) of quick riches. The fire of 1846 destroyed so much of the infrastructure (warehouses, ropewalks, wharves, candle factories, blacksmith shops) that the industry never recovered. The discovery of petroleum in Pennsylvania in 1859 was the final blow.

As the island's economy declined, so did its population. Decades of hardship followed until Nantucket began to reinvent itself, this time as a tourist destination. One thing that draws tourists to the island is the remarkably intact town. Thanks to years of benign neglect followed by an active preservation effort, more than 800 houses built before the Civil War still stand; almost all of them have been restored. The elegant mansions that line the main streets are testament to the great wealth produced by the whaling industry.

The Nantucket Atheneum was rebuilt after the fire.

The Nantucket Historical Association Georgen Gilliam Charmes, Excerpts from Diary of a Trip to Nantucket, 1846 Common-Place: The Undigested History of the Nantucket Atheneum, by Lloyd Presley Pratt

"The Great Fire of 1846," by Edouard A. Stackpole, Proceedings of the Nantucket Historical Association, 1946.

In the Heart of the Sea: The Tragedy of the Whaleship Essex, by Nathaniel Philbrick (Viking, 2000).