Raise a Glass for "Cheers"

Last call for Sam, Diane, Norm and the crew –

There wasn't a wet eye in the house. Taping the final episode of "Cheers" on a Paramount sound stage last month, the cast and crew seemed almost determinedly detached. Between takes Woody Harrelson (Woody) lay flat on his back on the bar, Ted Danson (Sam) retreated to a corner to do stretching exercises and Kelsey Grammer (Frasier) vanished inside his dressing room. Shelley Long (Diane), returning to the show after a six-season absence, found something other than welcoming embraces: the boys at the bar hung spoons from their noses to make her flub her lines. Rhea Perlman (Carla) wasn't any nicer to two VIPs playing extras. Slouching by the stools occupied by NBC Entertainment president Warren Littlefield and former NBC chairman Grant Tinker, Perlman suddenly jerked upright. "I don't know which of you stiffs groped me," she snarled. "But the next time it happens, you're all out of here!"

Indeed they are — and perfectly in character. From its very first round in 1982 to its May 20 finale (expected to draw 100 million onlookers), "Cheers" has remained TV's most unsentimental comedy, as disdainful of schmaltz as it was resistant to preachiness…. Respect must be paid.

"Cheers" was the first sitcom to make sexual tension its central premise (thus making Bruce Willis possible). Just as we wearied of Sam and Diane's on-and-off hotsies, in strode Rebecca (Kirstie Alley). Though Rebecca eventually succumbed to Sam, it was on equal terms: she two-timed him as blithely as he cheated on her…. More than any other sitcom, "Cheers" confronted the side effects of sexual attraction: humiliation, despair, self-loathing and stuck pants' zippers.

Special broadcast of the "Tonight Show."

It was kind of fitting for the "Tonight Show" to conduct a final tribute to "Cheers" since its host, Jay Lenno, is a native son of Massachusetts.
Login

On this day in 1993, the sitcom "Cheers" aired its 275th and final episode. One of the most popular shows in television history, "Cheers" was set in a bar modeled on the Bull and Finch Pub on Beacon St. in Boston. For 11 seasons, fans tuned in to follow the intertwined lives of people who seemed to spend every night in Sam Malone's bar, a place "where everybody knows your name." On May 20th, the cast came to Boston for a celebration, complete with proclamations from the governor, tributes from the legislature, and a special broadcast of "The Tonight Show." Thousands of people crowded onto Beacon Street. One fan spoke for many when he explained, "It's the end of an era. It's part of Boston."

The show was not an immediate hit; indeed, it was nearly canceled during its first season. 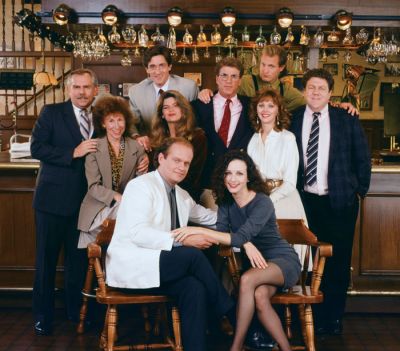 In the summer of 1981, NBC came to Boston in search of a bar. The network was developing a new sitcom set in a neighborhood pub, and the producers thought that Boston had just the right mix of characters for the cast — sports fanatics, earnest intellectuals, colorful politicians, and regular blue-collar guys.

The team visited bars all over town, before settling on the Bull and Finch Pub on Beacon St. just across from the Public Garden. With its three steps down to a brick walled room with diamond glass windows, Tiffany lamps, and wooden benches, the Bull and Finch had just the atmosphere they were looking for. Within a few months, a replica of the Bull and Finch interior had been constructed in Hollywood.

Shot mostly on Paramount Stage 25, "Cheers" premiered in September 1982. The show was not an immediate hit; indeed, it was nearly canceled during its first season. It soon developed a strong following and was ranked in the top ten for seven seasons. Over the years, it garnered a record-breaking 111 Emmy nominations and won the award 26 times.

The show featured a group of very different individuals, brought together by their shared experiences in Sam Malone's bar. Malone, played by Ted Danson, was a former Red Sox pitcher and recovering alcoholic who served up drinks and one-liners to his odd assortment of customers and employees. The regulars included a middle-aged letter carrier who still lived with his mother, a semi-professional beer drinker, a tight-laced English literature graduate working as a waitress, a slow-witted but lovable bartender, a neurotic psychiatrist, a naïve farm boy, and a hard-nosed businesswoman. "Cheers" launched the careers of a number of actors including Shelley Long, Rhea Perlman, Kelsey Grammar, Woody Harrelson, and Kirstie Alley.

The show's success came not just from the comedy but from the sense of community that it conveyed. After a few years, viewers could feel as if they had stepped into a place so familiar that they, too, knew everybody's name. The affection that eventually developed among the characters gave a touch of poignancy to the sarcastic put-downs and jokes.

As the show grew in popularity, so many fans made pilgrimages to the Bull and Finch that the bar changed its name to "Cheers."

As the show grew in popularity, so many fans made pilgrimages to the Bull and Finch that the bar changed its name to "Cheers." Since the exterior shots shown after each commercial break were filmed on location, visitors to Beacon St. had no trouble finding the spot. While alterations were made to accommodate an audience on the set, the interior of the bar also appeared familiar. "When it first became known that the Bull and Finch Pub was the inspiration for the TV show 'Cheers,'" a manager recalled, "visitors came in looking to take something home with them. They began by taking the ashtrays, the matches, the menus, and anything that wasn't tied down." The owners promptly opened a souvenir shop.

The final episode of "Cheers" was a 90-minute special that brought Sam and Diane back together. After a series of deceptions and misunderstandings, the couple agreed to marry and move to California. At the last minute, Sam decides that his real life is at Cheers, and he returns to the bar. In the memorable final scene, Sam is locking up after the regulars have gone home; a customer comes to the door, but Sam turns him away, saying simply, "Sorry, we're closed."

One member of the cast was heard to say, "I've never been resoluted or proclaimed in my life."

In Boston, the governor proclaimed May 20th "Cheers Day." On the steps of the State House, Governor William Weld said that the show would always have a place in Boston history. "Cheers," he teasingly told the crowd, had brought Boston "more fame than Paul Revere's ride, as much hometown pride as the Boston Red Sox and more pseudo-intellectualism, if you can believe that, than a Harvard Square cafe." The cast members arrived in eight stretch limos, escorted by police; trailed by fans and photographers, they headed to the House chamber. There Senate President William Bulger greeted them with tributes and resolutions. One member of the cast was heard to say, "I've never been resoluted or proclaimed in my life."

Cheers, formerly The Bull and Finch Pub, is located at 84 Beacon Street in Boston.

The website for Cheers, formerly the Bull and Finch Pub Cheers in Boston

Archives of the Museum of Broadcast Communications

On this day in 1997, Miramax released "Good Will Hunting," a movie about the collision of two Boston-area cultures: the heady, prestigious world of Cambridge academia and the proud but gritty working-class brotherhood of South...