To me psychology, for the most part, to-day lives, moves, and has its being in a pre-Darwinian age. There has hardly ever been a genetic paper of any kind read out of the four or five hundred presented at the meeting of the American Psychological Association, which, by the way, was organized in my house. Psycho-analysis in its larger scope, such as Jung has seen better than Freud, marks the advent of geneticism in this domain, and it is making about as much of a hullabaloo now as Darwinism did among the clergy when the "Origin of Species" was published. Perhaps there is somewhere in this country a good course of psychology given on this new line that is certain to sweep everything before it, but if there is I do not know of it. I believe I am the only professor outside of medical schools who belongs to our Psycho-analytic Association, but a view so large that it undercuts philosophy itself and analyzes philosophers, that it gives us a new basis for religion, a new interpretation of history, a new method of biography, a new conception of the child, a just view of disease, of all kinds of psychic troubles, is now looming up, and a few of the stock psychologists are beginning to see the handwriting on the wall. My own study and teaching in this field has rejuvenated me.

Quoted in G. Stanley Hall: A Biography of a Mind, by Lorine Pruette (D. Appleton and Company, 1926).

On this day in 1844 G. Stanley Hall was born in Ashfield. This farm boy from western Massachusetts would become the father of psychology in America. His career was marked by many firsts. In 1878 Harvard awarded him the nation's first Ph.D. in psychology. At Johns Hopkins University, he held the first professorship in the field and opened the first laboratory of psychological research. He trained many of the first generation of psychology professors and served as the first president of Clark University in Worcester. Among his many accomplishments during 30 years at Clark was bringing Sigmund Freud to the campus. In 1909, the founder of psychoanalysis delivered the only lectures he would ever give to an American audience. 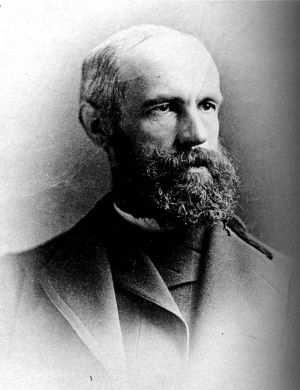 G. Stanley Hall is credited with founding psychology as a research science and a profession. Known also as the father of the child study movement in America, he was born in the western Massachusetts hill town of Ashfield. His parents were deeply religious farmers who struggled to make ends meet.

Like most children in antebellum Massachusetts, G. Stanley Hall attended the local district school. When he proved to be a gifted student, his parents managed to send him on to local academies where he could prepare for college.

In 1863 he entered Williams College, where many students were training for the Congregational ministry. During his sophomore year, Hall participated in a revival at the college and became a committed Christian.

To his parents' great joy, he began teaching a Bible class for workers in a nearby factory village and made plans to enter seminary upon graduation. In 1867 he enrolled at Union Theological Seminary in New York. Hall's professors noticed almost immediately that the young man had strong skeptical tendencies. These led Hall to quit the seminary and travel to Germany. He spent the next two years studying German, theology, and philosophy.

By 1871 Hall was deeply in debt. He returned to the U.S, completed his theological studies, and found a teaching post at Antioch College in Ohio. A book he read in 1874 introduced him to the new science of psychology. In 1876 he enrolled at Harvard and two years later earned the very first American Ph.D. awarded in the field. Hall focused his work on using psychology to explain how children develop and learn.

His first job teaching psychology was at Johns Hopkins University in Baltimore, where he stayed for seven years. In 1887 he founded the American Journal of Psychology and four years later the American Psychological Association.

In 1887 a new university devoted to scientific research opened in Worcester. The trustees named G. Stanley Hall the first president of Clark and charged him with creating a school modeled on Germany's scientific research centers. Among his students were men who would dominate American psychology for the next few decades.

Freud's five lectures at Clark (given in German over the course of five days) were the only ones he ever gave in the United States.

In 1909 G. Stanley Hall organized an international conference at Clark. He brought together 175 of the world's leading psychologists, including Carl Jung and Sigmund Freud, and an assortment of educators, physicians, and "the odd political revolutionary" in the person of Emma Goldman. Freud's five lectures at Clark (given in German over the course of five days) were the only ones he ever gave in the United States, and the honorary degree he received was the only one ever bestowed on the father of psychoanalysis.

Hall's own work focused on the nature of child development. He devoted himself to the new child study movement. Believing that each individual's growth follows the evolutionary pattern of human development, he formulated educational recommendations for the different stages of childhood. There was considerable popular interest in his research; magazines disseminated his theories to the general public.

"But no other one has had so much vision. . . . He is the Edison of psychology."

Over the course of his career, Hall lectured widely at Clark and beyond. He read extensively and published prolifically.

Hall resigned the presidency of Clark in 1919 after a 30-year tenure. In retirement, he returned to his early interests in philosophy and religion. He died in 1924 at the age of 80. In a tribute to Hall held by the National Academy of Science held the year after his death, a colleague described him as follows: "Dr. Hall started more lines of new thought and set more persons to thinking that any other person in all history. Some others have been more methodical, have developed more refined technique, and have been better text book makers. But no other one has had so much vision. . . . He is the Edison of psychology."

A statue of Sigmund Freud was installed in the center of the Clark campus in 1999.

A brief biography, timeline, and overview of Hall's papers are in the Clark University Archives.

Atlantic Monthly Publishes "The Battle Hymn of the Republic"