At the height of his career, John Sullivan was so popular that many suggested he run for Congress. Although he was not nominated, he issued the following public statement of his qualifications.

A good deal has been said about my becoming a candidate for Congress. I write to say that after thinking the matter over I have decided that when the time comes to elect a new Congressman in Boston I will be a candidate on the democratic ticket if the nomination is offered to me. There are several reasons which have induced me to adopt this course.

. . . Any man who doubts my popularity with the American people has only to travel about with me to get rid of that notion.

Some may criticize my occupation in life. They don't know what they are talking about. My business is, and always has been ever since I came before the public, to encourage physical culture.

. . . What I feel to be more important than all else is the work I have been doing to keep up the reputation of America among other nations. The best men from everywhere have tried to beat me, but failed, and since I first began, I have kept the pugilistic championship of the world in this country.

. . . A man who can quiet a crowd in Madison Square garden as I have done can make his presence felt in Congress or anywhere else on earth.

I therefore announce my willingness to enter political life.

Champion of the World

Quoted in John L. Sullivan and His America, by Michael Isenberg (University of Illinois Press, 1988).

Hi, Great to get these MA moments each date--It is developing into the framework (or roadmap)of possibly the first comprehensive history of Massachusetts. So many of the Bay State published histories are woefully inadequate in telling anywhere near the whole story. Technical correction: I thought you would like to know that on the e-mail intro to this day's topic it lists Nantasket Beach in Hingham but you have it correctly placed in Hull on the full version of the event. ------------------------- Bill Deane Massachusetts Aviation Historical Society P.O. Box 457 Wakefield MA 01880
Hingham and Hull

Before the eMoments were sent out, the script mistakenly located Nantasket Beach in Hingham. When the error was pointed out to us, we were able to correct the error, but only in the on-line version. The e-mails cannot be corrected once they have been sent, thus the discrepancy. Sorry for the confusion, and thanks for reading Mass Moments!
The Kilrain fight

The Sullivan - Kilrain fight was the last world title bout fought as a bare-knuckle contest. Sullivan's trainer for this fight was William Muldoon of New York. On July 7, 1889 some 3,000 fight fans invaded Richburg, a small town just south of Hattiesburg, Mississippi. The fight started at 10:30 AM and went on into the afternoon. In the 44th round Sullivan vomited, leading some to think he was ill and would go on to lose. However, Sullivan found his inner strength and fought on to the 75th round, at which time Kilrain's manager tossed in the towel to end the match and make Sullivan the champ. In 1892, Suuivan would lose the title to Gentleman Jim Corbet in 21 rounds.
Login

On this day in 1887, thousands of adoring hometown fans flocked to Nantasket Beach in Hull to glimpse Boston-born John L. Sullivan, the Heavyweight Champion of the World, and the diamond-studded, gold-plated belt he was given on the eve of his world tour. Sullivan had escaped the poverty of his Irish immigrant family by fighting for money, despite the fact that it was illegal in most states. A remarkable record of 47 wins, one loss, and three draws brought Sullivan international fame and close to $1,000,000 in prize money. Alcoholism interrupted and finally ended his boxing career. Considered the first American sports idol, John L. Sullivan was known during his time as "the man most men wanted to be."

Catherine Sullivan remembered that "Sully" was "always a fighter . . . he was strong as a bear as a baby." 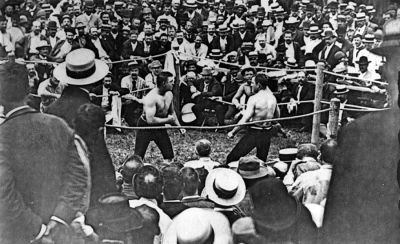 When John Lawrence Sullivan was born in Roxbury in 1858, the neighborhood was teeming with newly arrived Irish immigrants. Considered "unmannered bogtrotters" by native-born Bostonians, these newcomers lived in crowded, dilapidated houses, took jobs no one else wanted, worshipped in the Catholic church, and socialized with each other. John L. Sullivan's parents were no different. They rented part of a house in Roxbury. John's father Michael, a new arrival from County Kerry, worked at whatever job was available, digging ditches or carrying supplies for bricklayers and masons. He and his wife Catherine hoped for better things for their firstborn son, though. From the start, they thought he was special.

Catherine Sullivan remembered that "Sully" was "always a fighter . . . he was strong as a bear as a baby." Family lore told how he greeted a visiting aunt by clocking her and giving her a black eye when he was less than a year old. As a boy, he could win any fight and was a natural star in most athletic contests. He left school as a young teenager and worked at plumbing, tinsmithing, and masonry, while earning small amounts of money playing for semi-pro baseball teams on the side.

Prizefighting was illegal, and middle-class people considered it "butchery for profit," but in the saloons and music halls of American cities, working-class men reveled in the sport.

The young John Sullivan was ambitious. Described as "temperamental, rebellious . . . impatient, dissatisfied and seeking," he sought both fame and fortune. Prizefighting, Sullivan decided, was his ticket. Bare-knuckled boxing fed his self-esteem and sense of power. It gave him an identity — and a following. The nineteenth-century boxing ring was an urban "temple of manhood," and John L. Sullivan aspired to be its crown prince. Despite the fact that no one before him had ever made a living from boxing, Sullivan decided to try.

Prizefighting was illegal, and middle-class people considered it "butchery for profit," but in the saloons and music halls of American cities, working-class men reveled in the sport. The prizefighting arena was one of the few places where poor men could be stars and heroes, where the test of one's manhood had nothing to do with where one lived, worked, or went to church.

This was the world Sullivan wanted to conquer. In 1879 the 21-year-old challenged Providence boxer Jack Hogan, who declined to fight him. But Sullivan was on his way; a few months later he pounded veteran pugilist Mike Donovan in an exhibition match. Donovan had more skill and experience by far, but Sullivan made up for it with speed and power. Looking back, Donovan recalled knowing that he had "just fought the coming champion of the prize ring."

Across the country, stories about the boxer grew more and more outlandish. "He battled wild animals with his bare hands, drank rivers of liquor, had his way with regiments of women. . . ."

A month later, John L. Sullivan issued a challenge to fight "any man breathing" for any amount between $1,000 to $10,000. With big-time backers eager to make money off him and the press in hot pursuit of the man they now called "The Hercules of the Ring," Sullivan traversed the country taking all comers. Sometimes he fought with bare-knuckles; other times, with padded-gloves and timed rounds. Sullivan seemed unbeatable when he won the title of Heavyweight Champion.

The press was eager to promote Sullivan. Newspaper accounts portrayed him as an urban Paul Bunyan. Across the country, stories about the boxer grew more and more outlandish. "He battled wild animals with his bare hands, drank rivers of liquor, had his way with regiments of women. . . ."

Sullivan's appeal reached beyond the ring. He performed in vaudeville, made countless public appearances, and even considered a run for the Senate. He had such a devoted following that a famous song invited listeners to "shake the hand that shook the hand of John L. Sullivan."

He constantly warned young men to steer clear of liquor, telling them that "John L. Sullivan, champion of the world, could not lick whiskey. What gives any one of them the notion that he can?"

Accounts of the alcoholism and domestic abuse that marked the fighter's real life rarely reached fans, and caused little comment when they did. Nor was the public put off by his outspoken racism. Even as he repeated his challenge "to fight any man living," Sullivan refused to fight a black man. "I will not fight a Negro. I never have and I never shall," he declared.

Americans might tolerate drunkenness, violence, and racism, but they did not take well to a loser. As Sullivan's drinking took a toll on his fighting, the "Boston Strong Boy" started to weaken in a very public way. He fought drunk and lost badly. The end came in 1892 when Sullivan lost a championship match in New Orleans. Sullivan would later say that his opponent only "gave the finishing touches to what whiskey had already done to me." He retired from boxing two years later; in spite of having earned $1,000,000 over the course of his career, he barely made ends meet on the vaudeville circuit.

Sullivan took his last drink in 1905. Long estranged from his first wife, he married a woman he had courted during his Roxbury boyhood. They settled on a farm in West Abington, where he was known for his generosity and good cheer. He constantly warned young men to steer clear of liquor, telling them that "John L. Sullivan, champion of the world, could not lick whiskey. What gives any one of them the notion that he can?"

John Sullivan and His America, by Michael Isenberg (University of Illinois Press, 1988).