With the progress of knowledge the needs of the human body have not been forgotten. During the last decade much time has been given by scientists to the study of foods and their dietetic value, and it is a subject which rightfully should demand much consideration from all. I certainly feel that the time is not far distant when a knowledge of the principles of diet will be an essential part of one's education. Then mankind will eat to live, will be able to do better mental and physical work, and disease will be less frequent.

At the earnest solicitation of educators, pupils, and friends, I have been urged to prepare this book, and I trust it may be a help to many who need its aid. It is my wish that it may not only be looked upon as a compilation of tried and tested recipes, but that it may awaken an interest through its condensed scientific knowledge which will lead to deeper thought and broader study of what to eat.

It should be noted that Fannie Farmer owned a country house in Harvard, MA, which still stands. This Colonial Revival building was equipped (at least until the late 1970's - maybe still) with a hand-operated elevator that could be used to haul Fannie and her wheelchair to the various floors. ------------------------- ...from the part of Massachusetts we now call Maine.
Fannie Farmer

Amazing lack of foresight on the publisher's part wasn't it? I have my grandmother's 12th edition which is falling apart and still used regularly.
Login

On this day in 1857, Fannie Farmer was born in Boston, Massachusetts. She could not finish high school for health reasons, and took up cooking, which became the key to her great success. Farmer attended the Boston Cooking School and was such a good student that she joined the faculty. By 1891 she was the principal. In 1896 she published the Boston Cooking-School Cook Book, which was an immediate success, has never been out of print, and ensured its author’s financial independence. Americans measure ingredients in teaspoons, tablespoons, and cups due in large part to the success of this one book that sought to rationalize the approach to cooking.

Fannie Farmer's cookbook popularized the use of the standard teaspoon, tablespoon, and cup measurements. 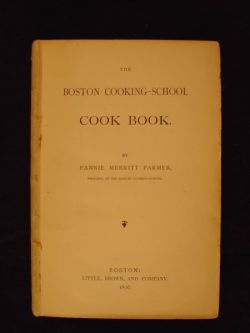 The Fannie Farmer Cookbook, one of the best-selling cookbooks in American history, began life in 1896 as the Boston Cooking-School Cookbook. Its author, Boston-born Fannie Farmer, was writing for the growing number of American women who aspired to the new ideal of middle-class family life: home ownership, with a wage-earning male head of household and a full-time mother and housewife to oversee the home and family. The book provided these women with the kind of practical, detailed knowledge earlier generations could expect to get from their mothers, aunts, or older sisters. It treated meal preparation and other domestic chores as serious, even scientific, pursuits. Fannie Farmer's work laid the foundation for home economics courses that soon became standard high school fare.

Her approach grew out of her personal experience. She was a 16-year-old student at Medford High School when her right leg became paralyzed as the result of a stroke. Her father's printing business was failing so instead of going on to college, she went to work as a mother's helper for a family friend. She had never done much cooking at home; with her employer's encouragement, she soon became an excellent cook. In 1887, at age 28, she entered the Boston Cooking School, established to train women to be professional cooks. She did so well that at the end of the two-year course, she was invited to stay on as assistant principal. By 1894, Fannie Farmer was the head of the school.

She introduced standard measures such as the teaspoon, tablespoon, and cup.

Farmer’s success eased the financial pressures on her family, and it gave her the opportunity to put her ideas about cooking and nutrition into a book — the Boston Cooking-School Cookbook — published in 1896. Aimed at ordinary housewives, rather than at professional cooks, the book introduced American women to the science of nutrition.

Rather than merely a collection of general recipes, Farmer's book asked women to think seriously about what their families should eat and how best to achieve a balanced diet. For example, the book opened with a discussion of the chemical composition of the human body and the nutritional value of different food groups. It went on to discuss diet in terms more akin to those found in a chemistry textbook than in other cookbooks. The book was innovative in another sense. It provided detailed cooking instructions and advocated standard measures such as the "level" teaspoon, tablespoon, and cup that American cooks have been using ever since.

Farmer's book asked women to think seriously about what their families should eat and how best to achieve a balanced diet.

Since the Boston Cooking-School Cookbook was more or less self-published, Farmer retained the copyright. The book made her wealthy and after eight years at the Boston Cooking School, Farmer went out on her own, opening Miss Farmer's School of Cookery in 1902. Her weekly demonstrations and lectures on cooking and diet were popular among both homemakers and professionals, and were regularly reported in the Boston Transcript. She had a special interest in diet for the sick and gave short courses to nurses and dietitians at area hospitals; she even lectured at Harvard Medical School.

Fannie Farmer was equally successful when she traveled the country lecturing to women's clubs and other groups of non-professionals. Before an audience, her shy and reserved personality gave way to vivaciousness. She suffered two strokes but continued lecturing from a wheelchair. When she died in Boston in 1915, at the relatively young age of 57, Farmer’s cookbook was still selling well. In 1997, a facsimile of the original edition was published, and the book was completely updated to celebrate the 100th anniversary of this American classic.  The book is readily available in many editions, as well as online formats.

On this day in 1894, Percy Spencer, the self-taught scientist who discovered the power of microwave technology, was born. With an endlessly curious mind, Spencer spent much of his early life figuring out how things...