This city is greatly exercised over the trouble at Notre Dame Church, which is attended by French Canadian Roman Catholics. The cause of the difficulty is the appointment of a Pastor by the Bishop who is an Irishman. Although the trouble has existed for several weeks, it was thought it would be settled without becoming anything serious. On the contrary, it is rapidly becoming a decidedly serious quarrel. On Sunday when the Pastor Father SAMUEL P. MAGEE [McGee] visited the church he was unable to open the door. The door and the windows were nailed up. The doors were, however, forced open by some of the parishioners, and the priest was making preparations to celebrate Mass. Before he had finished putting on his robes he was seized by several men and held a prisoner in the church vestry for about an hour and a half. In the meantime there was much excitement in the church, where the women were insulted and driven from the building. The priest was finally rescued from the vestry and escorted to his home. Later in the day the Frenchmen determined to kidnap him at night. The priest, hearing of this, had his house guarded by police during the night, and the designs of his persecutors were frustrated. The English-speaking Catholics are greatly angered at the conduct of the Frenchmen, and at a secret meeting determined to be present at the church next Sunday, when trouble is expected. There have been several rows already and several persons, principally Frenchmen, have been severely beaten. Father Magee [McGee] has been forced to leave the pastoral residence and obtain lodgings in other quarters. The Frenchmen has subscribed $750 to defray the expenses of a delegation to Rome, which will present the matter to and seek redress from the Pope, [the] Bishop having refused to put a French priest in place of the objectionable Irish priest. . .

In Lowell most of the French churches have closed. In the early 1960s the city called it urban renewal. Tearing down what had been called Little Canada. The original plan would have passed through an Irish parish but they fought to have that plan changed. In the end it closed the French church. Most of the parish had been forced to leave the community. New housing was promised but that took over 20 years to build and when they were done they were cement blocks that few would have thought to live in. Now in the past couple of years the church has decided to close many parishes. Guess what happened, French churches were closed.
Fall River Church

My grandparents were married in St. Anne's church in Fall River in 1924. I recently visited the church, where the organist was gracious enough to give me a tour of the church. It was apparently founded in the late 1800s. All of its pastors were of French Canadian descent. I was surprise to learn of the enmity between the Irish and French. My grandmother's name was Pineau ( or Pineault); my grandfather was an Irishman - CJ Sullivan. I am trying to follow this lead back to learn about both of their families. Thanks. I'm going to pass this article along to my parents ------------------------- Paul Sullivan
more on Irish-French Canadian disputes

The affair described in this Mass Moment was actually one of several disputes between French-Canadians and Irish, often involving church-related issues and the Irish dominance of the Roman Catholic hierarchy. Probably the most contentious was the "Sentinelle Affair" in Woonsocket, R.I. in the 1920s. A good source to learn more is Gerard Brault's book on French-Canadians in New England. This Fall River article did not mention a common factor in French Canadian reluctance to get involved in organized labor, in additon to their lack of industrial and union experience in rural Canada. Frequently French Canadian priests strongly advised their parishioners not to get involved, but rather to obey authority and go to work. This happened here in Lawrence during the 1912 "Bread and Roses Strike", and elsewhere. I wonder if it was another factor at play in Fall River... ------------------------- James F. Beauchesne Visitor Services Supervisor Lawrence Heritage State Park
more on Irish-French Canadian disputes

You can learn more about the French Canadian immigrants, and about their relation to both organized labor and political life, at the excellent Museum of Work and Culture in Woonsocket, Rhode Island. This museum is operated by the Rhode Island Historical Society, and also connected with the Blackstone Valley Historical Corridor. The staff at the museum have helped me lead some great field trips there, for students studying immigration, and I think it's a great place to learn about labor history. Meanwhile, in Worcester, there's still at least joking rivalry between the French Catholic college (Assumption) and the Irish Catholic college across town (Holy Cross). When I first arrived in Massachusetts not quite 30 years ago, I was amazed to find rivalries of this sort still so strong--and that doesn't seem to have changed much.
Login

On this day in 1884, a Fall River newspaper reported that French Canadian Roman Catholic parishioners had locked their newly-appointed priest out of their church. When the priest finally gained entry to the building, he was confined to the vestry and then threatened with further violence. The priest's "offense"? He was Irish, and the French Canadians would, as one of them proclaimed, "stand on the brink of hell" before they would submit to an Irishman. In this textile-manufacturing city, hard feelings between the more established Irish immigrants and the French Canadian newcomers ran deep, in spite of their shared religion. The quarrel was about ethnicity, class, and politics. In response to their parishioners' rejection of the Irish priest, the bishop closed the French Canadian parish.

The Canadians collected money to send a delegation to Rome to plead for the appointment of a French-speaking priest. 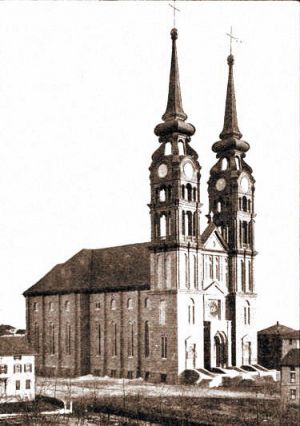 Most of the French Canadians who arrived in Massachusetts in the decades after the Civil War came, as the Irish had before them, to escape crushing poverty at home. Quebec had suffered a deep and prolonged agrarian depression in the mid-1800s. By 1880, one-third to one-quarter of all the arable land in Quebec had been abandoned as families found they could not survive on their farms. 25,000 French Canadians sought a new life across the border in New England's booming mill towns.

French Canadians poured into Lowell, Lawrence, Leominster, Gardner, Springfield, North Adams, New Bedford, and Fall River. Those who came to Fall River, which became a center of textile manufacturing with the development of steam power after the Civil War, joined a workforce that was made up predominantly of immigrants from England and Ireland. Many of the English were skilled workers who laid claim to the higher-paying jobs. They were also accustomed to urban life, had a tradition of participating in an organized labor movement, and backed pro-labor Democrats in politics. The Irish, some of whom had acquired textile machinery skills in Lancashire, England, before emigrating, quickly learned to adopt the practices of English militant laborers; they also began to use the city's frequent labor upheavals to build their base in the city's Democratic party. It was all utterly alien to the French Canadians.

By 1880, one-third to one-quarter of all the arable land in Quebec had been abandoned as families found they could not survive on their farms.

The Quebequois who came to Fall River were rural people. They had no experience with factory work, and their poverty gave them little choice but to accept lower wages than those paid to other groups. This earned them the enmity of both the English Protestants and the Irish Catholics. The Canadians were also hostile to labor unions and tended to support the Republican Party. Isolated by language, the Canadians clustered in their own neighborhoods, segregated from the English and Irish. Religion was a refuge; French-speaking priests provided ministry as well as community leadership and social services.

Tensions mounted as the Irish began to play a greater role in Fall River's labor movement and political establishment. Yankees, especially the Republican men who owned and ran the mills and city businesses, had traditionally dominated politics in the city. By 1879, however, one of the candidates for mayor was not only a Democrat but an Irishman. Within five years, Fall River had its first Irish mayor. Despite sharing a religion with the Irish, the French Canadians regarded the Irish as antagonists and did not support the Irish candidate.

Religion was a refuge; French-speaking priests provided ministry as well as community leadership and social services.

Labor protests added to the tension between the French Canadians and Irish Catholics. Organized labor had a long history among British factory workers. When Fall River mill owners recruited skilled English textile workers after the Civil War, they unintentionally imported labor radicalism as well. Throughout the 1870s, immigrant English and Irish textile workers organized a series of labor actions and strikes. The French Canadians did not support the strikes, and in their desperate poverty they frequently took jobs as scabs or "knobsticks," as they were called. The Irish hated the French Canadians for what they saw as betrayal, and violence against "knobsticks" turned deadly.

In August 1884, the French Canadian priest assigned to Notre Dame, the church that served the French Canadians in the Flint Village area of Fall River, died suddenly. Three months later, the Bishop named a new pastor: Father Samuel P. McGee, an Irishman. The French Canadians were outraged. When the new priest arrived to say Mass in mid-December, he found the doors and windows nailed shut; when he managed to get into the building, several of the parishioners held him captive and threatened to kidnap him should he attempt to return to the church. Father McGee fled the pastoral residence and went into hiding. The Canadians collected money to send a delegation to Rome to plead for the appointment of a French-speaking priest.

Angry parishioners followed Father McGee out of the church, abusing and threatening him, and "calling him a d—d Irishman."

Tensions grew worse in the following weeks. Fights broke out between those who were willing to accept the new priest and those who insisted on a French pastor. Angry crowds gathered outside the church and disrupted services. Police were dispatched to the church to prevent "sacrilege." By January, the newspapers were reporting near-riots. In one instance, a new choir arrived at the church to find the old choir, which had refused to sing for an Irish priest, threatening violence if the singers took their seats. Angry parishioners followed Father McGee out of the church, abusing and threatening him, and "calling him a d—d Irishman."

On February 13, 1885, the Bishop closed the church and withdrew the priest, explaining that he had "been compelled to this action by the insubordination of some of the flock." The church reopened the next year, under another Irish pastor, and conflict began again. Ethnic tensions between Irish and French Canadians in Fall River did not ease until the end of the century when the arrival of Portuguese, Greeks, Poles, Lithuanians, and Italian immigrants changed the ethnic, political, and social mix of Fall River and other Massachusetts cities.

On this day in 1847, Boston's leading citizens held a meeting at Fanueil Hall in response to news of the famine devastating Ireland. With the failure of the potato crop several years in a row,...