. . . These morning thousands were good church people, most of them. Their home churches, such large churches as the Park Street Church and Tremont Temple, and churches in other sections of Boston proper, had closed their morning services so that their congregations might fill Sunday’s church.

The men and women had risen far earlier than their Sunday custom. At 8 o’clock Albert Peterson, custodian of the tabernacle, found squatters outside some of the 40-odd entrances. A little before 9 the 600 ushers and doorkeepers had reported and the doors were thrown open. Reporters coming at 9:15 saw only scattered empty benches.

Some 8000 came with little paste-board admission tickets distributed by pastors of churches which had closed yesterday. The building filled up before 10:30 and full of people, floored with faces, looked much more expansive from the platform than when it is empty.

For 45 minutes crowds were pushing in trying to find one seat more here, another there. Family parties were separated. The hour before Sunday appeared was passed more easily than 15 minutes before a big football game.

Chairman Allan C. Emery was on the platform and he formally presented Mr Sunday to his first Boston congregation as “One, yes, I may say, the most widely known and the most greatly loved American citizen.”

Handkerchiefs were waved through the air as the greeting from some. All applauded. Sunday was off:

“If I hadn’t played ball in Boston years ago I might have supposed you’d be so hedge in with conservatism that you’d look cross-eyed at any one who lives the other side of the Connecticut Valley. But folks are folks everywhere.”

He thanked them for the welcome, thanked the newspapers. He added to the introduction given him: “If Mr Emery had remembered it he might have added ‘the most hated citizen in America.’” . . .

On this day in 1916, 55,000 people came to hear Billy Sunday preach in Boston. An overflow crowd of 15,000 had to be turned away from the temporary tabernacle that had been erected on Huntington Avenue. During the next ten weeks, the baseball star-turned evangelist drew an estimated 1,500,000 to his Boston meetings. His acrobatic antics, colorful language, frank discussion of sexual mores, and retinue of performers smacked of a vaudeville show. But his masterful preaching moved many to commit their lives to Jesus. Billy Sunday led countless crusades across the nation. The sermons against the evils of alcohol that he delivered in Boston, long remembered as among his most powerful, helped win passage of the constitutional amendment that made prohibition the law of the land. 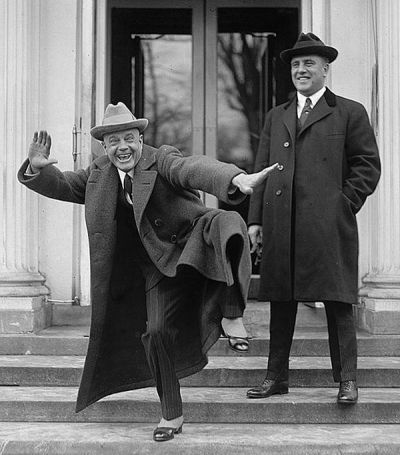 Billy Sunday was born in 1862 in a log cabin in Ames, Iowa, one month before his father died in the Civil War. Eventually, desperate poverty forced his mother to send her two sons to an orphanage. At 15, Billy ran away and found a job as a stable boy. In his spare time he played amateur baseball and was soon attracting attention for his speed and knack at stealing bases.

Sunday's life changed dramatically in 1883 when Cap Anson, owner of the Chicago White Stockings, discovered him. Anson invited Billy to Chicago for a tryout and challenged him to a footrace against the team's fastest player. Lacking money for proper shoes, Billy ran barefoot and won by 15 feet. Anson signed him on the spot, and Billy Sunday was soon known nationwide as the fastest man in baseball.

The White Stockings were a hot franchise, and Sunday's fame and fortune rose with the team's. He played professional baseball for eight years, earning ten times the annual wage of an average working man. Like many ball players, he was hard-living and hard-drinking. One night in 1887, after a game in Chicago, Sunday went drinking with his teammates. As they sat on the steps outside a saloon, he overhead a group of urban missionaries singing hymns. Sunday experienced a religious conversion. Within a few years, he quit drinking, married, and became an evangelical preacher. In 1891 he gave up his baseball career and accepted an 80% pay cut to become a full-time evangelist.

Wild-eyed and frantic, "like an addict going cold turkey," as one observer wrote, he electrified his audiences.

At first, Sunday led quiet revivals in small towns. But in time he developed a distinctive style of preaching, and crowds in the thousands began to attend his meetings. At first he held his massive gatherings in tents, but eventually he arranged for temporary wooden tabernacles to be constructed. So that he could be heard in an age before microphones, he spoke from a special raised platform with baffles overhead; sawdust covered the wooden floors to muffle footsteps. At the close of each sermon, he would invite penitents to come forward and accept Jesus; those who walked down the sawdust-covered aisles were said to be "following the sawdust trail."

Sunday was unlike any other preacher at the time. Contemptuous of what he called "flabby-cheeked, brittle-boned, weak-kneed . . . effeminate . . . Christianity," he preached like the competitive athlete he was. He was constantly in motion, leaping around the stage, crouching and jumping, walking and running. Wild-eyed and frantic, "like an addict going cold turkey," as one observer wrote, he electrified his audiences. During his nearly 50-year-career, he converted close to 300,000 people.

He gave what became one of his most famous anti-alcohol sermons during the Boston crusade, proclaiming, "Whiskey and beer are all right in their place, but their place is in hell."

Sunday was at the height of his fame when he came to Boston in 1916. Because the fire-prone city's building codes prohibited wooden structures, he had a tabernacle built of brick and steel. It had room for 18,000. Sunday delivered riveting sermons from a 15-foot-high platform. Large choirs, bands, pipe corps, and chorus girls from Al Jolson's Winter Garden troupe accompanied him.

Although Billy Sunday attacked all forms of sin, he took particular aim at the evils of alcohol. In Boston he focused especially on the need for prohibition. He gave what became one of his most famous anti-alcohol sermons during the Boston crusade, proclaiming, "Whiskey and beer are all right in their place, but their place is in hell." Sunday's campaign against drinking helped win passage of prohibition in 1919.

By no means did everyone in Boston considered Sunday a positive influence. Many conservative clergymen criticized his undignified behavior on stage and his tendency to be "scandalously frank to the point of sexual crudeness." One Winchester minister declared that "any cultivated person [should be] terribly revolted by the extreme sensationalism, the coarse jokes, the super-slang . . . and the dancing dervish contortions of the revivalist, where perspiration seems to be confused with inspiration." Academics took offense at Sunday's claim in one Boston sermon that "there are damnable things being taught in the colleges of the country by men called professors, and the rottenest of all are here in New England . . . the students' faith in God is torn to shreds here in your colleges."

The social changes brought about by immigration, urban growth, and industrialization caused many Bostonians to embrace the evangelist's call for a return to conservative social values. In spite of the critics, an estimated 1,500,000 people came to hear Sunday during his ten-week Boston crusade; nearly 65,000 made the trip down the "sawdust trail."

Billy Sunday held a second crusade in Boston in the 1930s, but by then the evangelist's popularity and influence had waned dramatically. He died in 1935, after losing two sons to alcoholism.

Blessed Assurance: A History of Evangelicalism in America, by Randall Balmer (Beacon Press, 1999).