“The Very Playful Museum Conceived by Author/Artist Eric Carle, A New Site Illustrates the Fun of Learning,” by Jack Thomas.

A visitor enters a grand lobby that features 20-foot windows and four stunning works of art by Carle, each 8 feet by 16, in vivid red, green, blue, and yellow against white walls.

"What Eric was envisioning," says Clark, "is that you are walking into one of his books."

Designed by longtime friend and principal architect Earl Pope, the museum was set in the orchard and designed in an exterior of white stucco to reflect Carle's reputation for white pages contrasted with bright collages that depict the natural world.

"People may think, oh, a museum for picture-book art - it must be a children's museum," says Clark. "Now, children's museums perform an important function in introducing children to pre-choice learning in an institutional environment, but we are the next step. There are a lot of children intimidated by museums and art, and that's what we want to soften. My mission is to assure people that they can't flunk museumgoing."

Unlike many museums designed in part for children, the Carle museum is free of electronic honky-tonk.

"A picture book is interactive," says Carle, "and our art studio, but interaction where you push something electronic? No. I like books, the feel, the smell."

"So much of life already deals with electronic interaction," he says, "but if we can take people back to basics and help them realize there are things that can be done with eyes and hands that are not electronic and yet meaning ful, then perhaps we can help make other experiences more powerful."

On this day in 2002, the nation's first museum of picture book art opened in Amherst. A decade earlier, children's book author and illustrator Eric Carle had visited a picture book museum in Tokyo and returned home determined to build one in the United States. The Northampton-based artist, perhaps best known for The Very Hungry Caterpillar, received support from nearby Hampshire College, which offered space on its campus. Architects designed the building to make visitors feel as if they were stepping inside one of the bold, brightly colored collages that make Eric Carle's books so engaging to children and adults alike. One of many messages Carle received at the museum's dedication read: "Everyone in our neighborhood sends congratulations." It was signed, "Your Life-Long Neighbor, Fred Rogers."

"When I was in first grade, I told my mother to write my teacher and explain I was not suited for education." 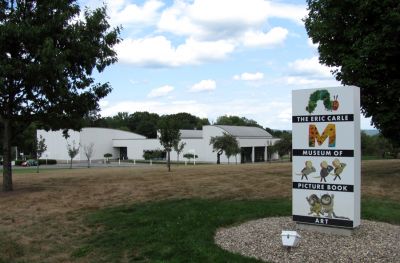 In 1969 The Very Hungry Caterpillar crawled its way into the hearts and minds of hundreds of thousands of preschoolers. Eric Carle, who had spent his early career as a commercial artist, had written a delightful book and illustrated it with colorful collages. The simple, heartwarming story, bold images, and whimsical hole "eaten" through the book stimulated children's sense of color and touch and proved irresistible to them and their elders.

In the years since then, Eric Carle has written over 50 children's books and illustrated more than 70. The Very Hungry Caterpillar has been translated into 30 languages and sold over 20,000,000 copies. Others, such as Brown Bear, Brown Bear, What Do You See?, have also become classics.

Carle believes that his success lies in creating stories that engage young children's curiosity about the natural world. He explains, "I try to entertain and delight the child in me."

"I try to entertain and delight the child in me." 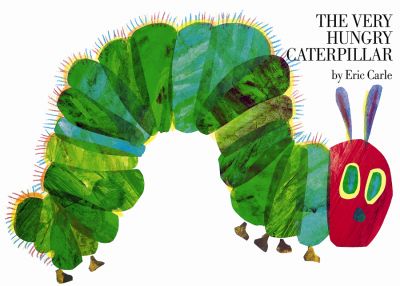 The happiness of his early years, especially in contrast to the hard times that followed, made it natural for him to draw on his childhood for inspiration. He was born in 1929 in Syracuse, New York, to a German immigrant couple. His father was a nature lover who took his young son on walks to explore plants and animals. "I think in my books I honor my father by writing about small living things, and in a way I recapture those happy times." At five, he entered kindergarten and delighted in the school's colorful paints, big brushes, and large sheets of paper.

When Carle was six, everything changed. His parents returned to Germany. He had to start school again, this time with a strict disciplinarian for a teacher. "It was small sheets of paper, hard pens, and I think I'm still trying to resolve that period through my books. When I was in first grade, I told my mother to write my teacher and explain I was not suited for education." Carle was miserable and often dreamed of building a bridge back to America.

When Eric was 10, war broke out. His father was drafted into the army, taken prisoner, and spent eight years in a Russian prison. Pressured to join the German Army at 16, Eric Carle managed to avoid service. He took refuge in his art, continuing his studies with the support of a high school teacher.

"I think in my books I honor my father by writing about small living things, and in a way I recapture those happy times."

When the war ended, Carle attended a prestigious German art school. Finally, in 1952, he returned to the United States. He landed in New York City with an impressive portfolio and $40. He soon found work as a graphic artist in the advertising industry, a job that demanded that he come up with ideas quickly. Carle instinctively turned to the things that had inspired him in his youth. The collage —vibrant layers made from hand-painted tissue paper — became his specialty, and in 1967 a book editor chose him to illustrate Brown Bear. The work was an immediate success.

Eric Carle believes that the transition from home to school and the introduction to reading can be stressful for young children and that drawing, coloring, and looking at art can help. "We leave a place of warmth and protection for one that it unknown. . . . In my books I try to counteract this fear . . . I want to show [children] that learning is really both fascinating and fun." He likes to think of his illustrations as providing a bridge, like the one he once dreamed of building across the Atlantic, to the new world of literacy. The goal of the Picture Book Museum is to provide that bridge through exhibitions, hands-on art studios, and visits with artists. He also envisions the museum as a bridge between the world of children's illustration and fine art.

He likes to think of his illustrations as providing a bridge, like the one he once dreamed of building across the Atlantic, to the new world of literacy.

The museum is set in a 7.5 acre apple orchard donated by Hampshire College in Amherst, part of the college's Cultural Village, which includes the National Yiddish Book Center. When visitors enter, they encounter four huge Carle collages hung on white walls. One of the three galleries features bugs, bears, and butterflies from some of Carle's most popular books; the remaining galleries hold changing exhibitions of work by other illustrators. An art studio provides a space for visitors to create their own collages. The building also contains a 130-seat auditorium and a library housing a large collection of picture books and 1,500 of Eric Carle's own works.

It is hoped that, together with the Dr. Seuss Memorial in Springfield, the Eric Carle Museum will draw young families and devotees of children's literature to western Massachusetts.

On this day in 2002, Springfield celebrated the completion of a memorial to a hometown hero, Dr. Seuss. Located in the Library and Museum Quadrangle is a bronze sculpture garden peopled with characters from Dr....