There is nothing more certain in human affairs than that the adoption of free-trade by the United States at their present stage of progress would largely diminish their productive power, reduce the volume of their trade, both foreign and domestic, and consequently lessen their general prosperity. We may suppose that there are not many among us bold enough openly to advocate the prostration of American industry; yet every orator and writer who advocates our adoption of free-trade virtually does that.

From "The Tariff Policy of England and of the United States Contrasted," by Erastus B. Bigelow (Boston, 1877).

In Jan of 1851, HDT writes a detailed entry of the weaving processes in a Clinton gingham factory. He then write a few paragraphs on the Bigelow factory. He is a lot more interested in industrial processes than one might think. Dwight "The Coach lace mill--only place in this country where it is made by machinery--made of thread of different materials--as cotton--worsted-- linnen--as well as colors--the raised figure produced by needles inserted woof fashion. Well worth examining further. Also pantaloon stuffs made in same mill--& dyed after being woven--the woolen not taking the same dye with the cotton--hence a slight particolored appearance. These goods are sheared i.e. a part of the nap taken off--making them smoother--Pressed between paste boards. The Brussels carpets made at the Carpet Factory said to be the best in the world. Made like coach lace only wider. Erastus (?) Bigelow inventor of what is new in the above machinery. & with his brother & another owner of the carpet factory. I am struck by the fact that no work has been shirked when a piece of cloth is produced, every thread has been counted in the finest web--it has not been matted together--the operator has suceeded only by patience perseverance and fidelity."
Login

On this day in 1879, Erastus Bigelow, the father of the modern carpet industry, died in Boston. Born in West Boylston, Bigelow and his brother followed their father into the textile business. After several inventions that mechanized production of suspender webbing and piping cord, Bigelow revolutionized the carpet-making industry with his invention of an automatic carpet loom in 1841. His Bigelow Carpet Company factory in Clinton produced various types of carpets much more cheaply than was possible with the use of hand looms, making carpets available to the middle class. Throughout his lifetime, Bigelow patented at least 35 looms. His interest in technology extended to educating future generations: he was one of the founders of the Massachusetts Institute of Technology in 1861.

Bigelow's loom doubled the country's carpet production in the first year alone and tripled it by 1850. 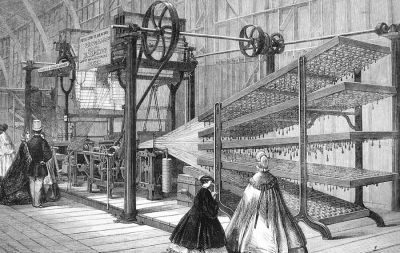 Erastus Bigelow's parents wanted him to become a physician, but when his father's cotton weaving business failed, the son had to abandon his studies. By 1832 the 18-year-old had invented two machines that, inconsequential as they might sound, would revolutionize an entire industry, a handloom for making the webbing used in men's suspenders and a machine for making piping cord.

In 1850 Erastus and his brother Horatio set up a new business to produce an ornamental border material called coach lace. The abundant waterpower in central Massachusetts was ideal for textile manufacturing, and factory jobs drew a diverse ethnic population of Irish, German, Scottish, and English immigrants who worked alongside young women from New Hampshire and Vermont.

Erastus's first major invention was a power loom to weave coach lace. This early machine had most of the innovative features that would eventually be incorporated into his carpet looms. The success of the lace loom brought Bigelow instant recognition. In 1838 he and his brother incorporated the Clinton Company to manufacture the looms and use them to produce coach lace. Later that year, Erastus received another patent, this one for an automatic loom that wove bedspreads.

When Erastus Bigelow invented a power loom for weaving carpets in 1839, he not only reshaped the carpet industry; he changed the way Americans furnished their houses. 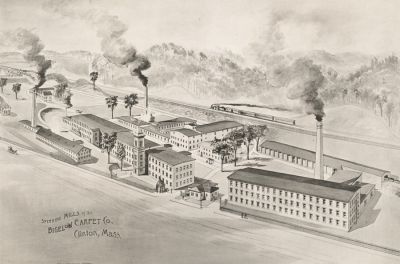 Buoyed by his success in mechanizing textile production, Bigelow turned his attention to the carpet industry. The nation's first carpet mill was established in Philadelphia in 1791. Soon other mills opened, many of them in New England. Until the 1840s, these mills used handlooms. Carpet weavers were skilled laborers who commanded high wages. As a result, woven pile carpets were beyond the reach of most eighteenth- and early nineteenth-century families.

When Erastus Bigelow invented a power loom for weaving carpets in 1839, he not only reshaped the carpet industry; he changed the way Americans furnished their houses. A hand weaver could produce two yards a day of two-ply ingrain carpet. A power loom could turn out 25 yards in the same amount of time. Bigelow's loom doubled the country's carpet production in the first year alone and tripled it by 1850. As the quantity went up, the price came down. It was no longer only wealthy families that could afford a carpet for their parlor.

Its carpets could be found in the White House, the U.S. Senate and House, the Massachusetts State House, New York City's Waldorf-Astoria Hotel, and St. Patrick's Cathedral.

Bigelow continued to innovate. In 1842 he patented a power loom that made it possible, for the first time, for a single worker using a punch-card device to weave fabrics with large-scale, elaborate designs. These too could be priced within the reach of middle-class families.

Erastus Bigelow never lost his interest in or talent for industrial innovation. In addition to his support for the new Massachusetts Institute of Technology, he was a member of the London Society for the Encouragement of Arts, Manufactures and Commerce and a member of the American Academy of Arts and Sciences.

Bigelow's carpet company operated in Clinton from 1849 until 1933. Its carpets could be found in the White House, the U.S. Senate and House, the Massachusetts State House, New York City's Waldorf-Astoria Hotel, and St. Patrick's Cathedral. Today the company is a division of Mohawk Industries, headquartered in Georgia. Erastus Bigelow's first automatic carpet loom is now part of the Smithsonian Institution's permanent collection.

The Erastus B. Bigelow papers, 1832-1879 are in the collection of the Massachusetts Historical Society.

A Century of Carpet and Rug Making in America, Bigelow-Sanford Carpet Company, 1925.

On this day in 1958, the North Adams Transcript reported that the owners of the Berkshire-Hathaway Company had passed a death sentence on their factory in Adams. The company announced that it was shutting down...