It is natural to try to understand one's own time and to seek to analyse the forces that move it. The future will be determined in part by happenings that it is impossible to foresee; it will also be influenced by trends that are now existent and observable. We speculate as to what is in store for us. But we not only undergo events, we in part cause them or at least influence their course. We have not only to study them but to act. Especially is this true as regards peace in the future. The question whether the long effort to put an end to war can succeed without another major convulsion challenges not only our minds but our sense of responsibility.

As to judging our own time, and thereby gaining some basis for a judgment of future possibilities, we are doubtless not only too close to it to appraise it but too much formed by it and enclosed within it to do so…

I have spoken against fear as a basis for peace. What we ought to fear, especially we Americans, is not that someone may drop atomic bombs on us but that we may allow a world situation to develop in which ordinarily reasonable and humane men, acting as our representatives, may use such weapons in our name. We ought to be resolved beforehand that no provocation, no temptation shall induce us to resort to the last dreadful alternative of war.

May no young man ever again be faced with the choice between violating his conscience by cooperating in competitive mass slaughter or separating himself from those who, endeavouring to serve liberty, democracy, humanity, can find no better way than to conscript young men to kill.

As the world community develops in peace, it will open up great untapped reservoirs in human nature. Like a spring released from pressure would be the response of a generation of young men and women growing up in an atmosphere of friendliness and security, in a world demanding their service, offering them comradeship, calling to all adventurous and forward reaching natures.

We are not asked to subscribe to any utopia or to believe in a perfect world just around the comer. We are asked to be patient with necessarily slow and groping advance on the road forward, and to be ready for each step ahead as it becomes practicable. We are asked to equip ourselves with courage, hope, readiness for hard work, and to cherish large and generous ideals.

This is a wonderful short bio of an inspirational woman whom I'd never heard about until today. Happy 138th Birthday to Emily! I'm just left wondering about the photos at the top of the page (especially all those gentlemen with Teutonic-looking mustaches!). It would be nice to have these folks clearly identified - I'm assuming the woman in plaid is Emily Greene Balch, but a bit more context for the photo would be helpful.
Photo identification?

Your assumption is correct - that is Ms. Balch on a 1905 research trip to Hungary. The caption we received from the Peace Collection at Swarthmore only labels these men and women as 'friends,' and the Collection's librarian has indicated that no more information is available regarding their identities. Balch's research in Hungary and Austria led to her 1910 publication of Our Slavic Fellow-Citizens, a study of the main concentrations of Slavs in America and of the areas in Europe from which they emigrated.
Photo identification?

I grew up in Wellesley. Miss Balch was a friend of my parents and for a time a neighbor. My mother was also a Wellesley College graduate. I have fond memories of visiting Miss Balch's house when I was very young. My parents always thought very highly of her.
how timely!

On this day in 1867, Emily Balch was born in Jamaica Plain. Her parents' affluence and enlightened views allowed her to attend college at a time when few women did. She entered Bryn Mawr in 1886 and graduated with honors three years later. After studying abroad and helping start a settlement house in Boston, she decided on an academic career. She taught at Wellesley for 22 years until her growing political activism and her opposition to U.S. entry into World War I cost her her job. For the rest of her long life, she devoted her talent and energy to organizing women on behalf of world peace. In 1946 her accomplishments were recognized when she was awarded the Nobel Prize for Peace. 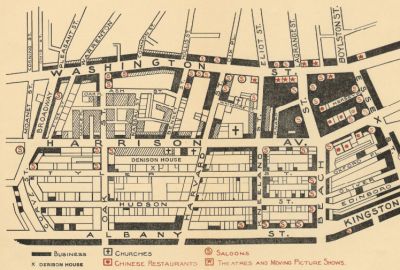 Emily Greene Balch grew up in a prosperous and well-established New England family in the years after the Civil War; she was strongly influenced by her parents' liberal Unitarian values. When she was 10, a new minister came to her church. "He asked us," she later recalled, "to enlist in the service of goodness whatever its cost." Emily Balch accepted this pledge and her "desire to live up to it" determined her life's work. For her commitment to promoting cooperation among individuals and peoples, she was awarded the 1946 Nobel Peace Prize. Her friend Jane Addams was the first American woman to receive the prize. She was the second.

In the late 1800s, the number of American women attending college was beginning to increase. Emily Balch was a member of a small privileged minority when she went off to Bryn Mawr College in 1886. She graduated with the first class in 1889 and won the college's highest honor, the European Fellowship.

She enrolled at the Sorbonne in Paris. She studied French approaches to alleviating poverty but was disappointed never to meet a poor person herself. Soon after her return home in 1892, she helped to found Boston's first settlement house, Denison House.

Modeled on Jane Addams' Hull House in Chicago, Denison House provided the poor, largely immigrant residents of the South End with educational and recreation activities (sports, clubs, classes) and facilities (a gymnasium, library, and clinic). When times were especially hard, Denison House joined with other settlements to sponsor emergency programs such as milk and coal distribution.

"He asked us, to enlist in the service of goodness whatever its cost."

Once Denison House was firmly established, Emily Balch decided that she would be most effective teaching at a women's college. Wishing to awaken "the desire of women students to work for social betterment," she joined the economics faculty at Wellesley College in 1896. She remained for the next 22 years.

Her research and publications reflected her commitment to the underclasses. At a time when many Americans feared and opposed immigration from Slavic countries, Balch traveled and lived among Slavs both in Europe and in the U.S. Her comprehensive study, Our Slavic Fellow Citizens, published in 1910, drew on her research to counter negative stereotypes of immigrants from eastern and southern Europe.

During the Wellesley years, she continued her reform activities, co-founding and leading the Women's Trade Union League, supporting striking workers, and speaking out against racial injustice and anti-immigrant prejudice.

The outbreak of World War I in 1914 brought a major shift in Emily Balch's career. A pacifist since the Spanish-American War, she now committed all her energies to the cause of world peace. In 1915, she took a leave of absence from teaching to attend the International Congress of Women in the Netherlands. On her return to the U.S., she lobbied President Woodrow Wilson to accept the ICW's plan for mediation rather than committing the U.S. to war. She worked against the draft, defended the rights of conscientious objectors and the foreign born, and campaigned vigorously — but unsuccessfully — for the U.S. to remain neutral.

She was a superb consensus builder.

By 1919 her anti-war views had alienated her from the Wellesley administration, and her appointment was not renewed. Friends urged her to bring a case against the college for violating her academic freedom, but she refused. She had known the likely consequences of her actions, she said. She was 52 years old and without a job.

In the spring of 1919, she participated in the International Congress of Women in Zurich, which established a permanent organization, the Women's International League for Peace and Freedom. Emily Balch became the League's paid international secretary-treasurer.

The goal of the WILPF was to promote lasting peace by attacking the underlying social, economic, or political conditions that gave rise to conflict in the first place. The WILPF criticized the harsh terms imposed on Germany by the Treaty of Versailles and predicted that the treaty would lead to lingering hostility between the victors and the vanquished.

As the new League of Nations was taking shape, Balch and the WILPF lobbied for enlarging the membership, putting in place a democratic structure, and protecting the rights of minorities. In 1922, Balch resigned her post and moved into a voluntary role. She was a superb consensus builder. As one biographer put it, "holding together the WILPF's mixed international constituency — which included, among others, supporters of international revolution and absolute pacifists — was no easy feat."

Balch gave her prize money to the women's peace movement. With limited means of her own, she spent the last years of her life in a Cambridge nursing home.

Balch's belief in the possibility of world peace was deeply shaken by Hitler's aggression and his treatment of the Jews. After the Japanese attack on Pearl Harbor, she supported the U.S. war effort as the lesser of two evils. While she remained a member of the WILPF, she realized that fascism could be destroyed only through the use of force. Now in her mid-70s, she spent the war years working to help Japanese Americans in the internment camps and encouraged other members of the WILPF to do the same.

In 1946 at the age of 79, Emily Balch won the Nobel Prize for Peace. As the Nobel Committee said, "she has shown that the reality we seek must be won through hard work in the world in which we live." The award also recognized the WILPF for demonstrating the power of women's leadership in effecting social change.

Balch gave her prize money to the women's peace movement. With limited means of her own, she spent the last years of her life in a Cambridge nursing home. She died there in 1961 at the age of 94.

On this day in 1841, Dorothea Dix visited an East Cambridge jail and was appalled to see mentally ill women confined alongside hardened criminals. The 40-year-old teacher and writer had been exposed to the work...