"I rose this morning before four . . . it is now toward 11 and my cheese will soon be ready to chop the last time, we make more than we ever did, we have a great many good things, the best butter I ever made owing to the cool weather we have, fine strawberries, and good milk . . but we have some crosses, a fine field of wheat 20 acres all destroyed, with the Hesian fly or nearly . . . Cheese, cheese, hay, hay, cooking, cooking . . . churning every other day sometimes, - - I have had two days now, that I have indulged myself in bed till near 5, but tomorrow morning it must be a little after 3 that the butter may be worked in the cool air . . . I do not have time for thots and reflection, that I think I should have."

On this day in 1747, Elizabeth Porter was born in the Connecticut River Valley village of Hadley. Five years later, her father built the first house outside the town center. He called it "Forty Acres." It would be Elizabeth's home for the rest of her long life. Her father died in 1755. Her 36-year-old mother never remarried. With help from kinfolk, enslaved people, and hired help, the widow Porter ran a 600-acre farm on what was then the Massachusetts frontier. After her daughter married Charles Phelps in 1770, the younger woman became mistress of the estate. Elizabeth Porter Phelps's descendants would occupy it for the next 200 years, but she would be one of the last female members of the family to shoulder the burdens of a hard-working farm wife.

While her wealth brought her a measure of privilege, it did not free her from a daily life of unrelenting domestic labor. 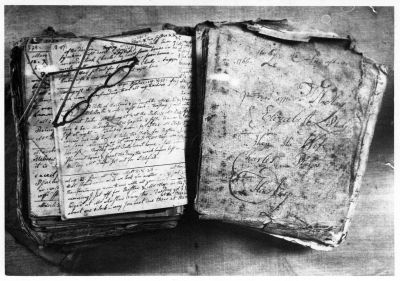 Elizabeth Porter was born into a family of "River Gods, " as the group that settled and grew wealthy in the fertile Connecticut River Valley was known. With their elegant mansions, filled with fashionable furnishings, the "River Gods" formed a cohesive and exclusive kinship network that exercised nearly total cultural domination in the valley. As the only child, Elizabeth was sole heir to her father's estate. While her wealth brought her a measure of privilege, it did not free her from a daily life of unrelenting domestic labor.

We know more about Elizabeth than about most of her contemporaries because she enjoyed "the pleasures of the pen," as she called it. She kept a diary for 54 years and corresponded regularly with absent friends and family. Although Elizabeth Porter Phelps wrote about the historic events of her day, including the Revolution, Shays' Rebellion and the War of 1812, she was primarily concerned with her family, her faith, and her community.

When Elizabeth Porter married Charles Phelps, a farmer, land speculator and public official, in 1770, he came to live at Forty Acres and helped his wife and mother-in-law manage the farm. During the next decade, Elizabeth bore three children, buried one, and adopted a fatherless infant girl. 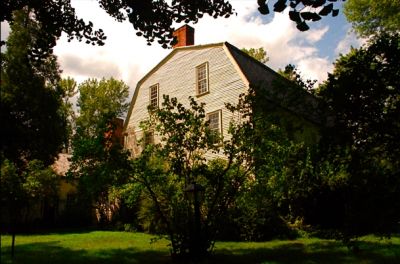 Being mistress of a large household was hard work. Elizabeth could afford to have more hired help than most women, but she also had heavier responsibilities. She owned two slaves and employed several live-in female domestic workers. Her husband oversaw the male laborers, but Elizabeth saw to their care and essential needs. All of their domestic laborers, free or enslaved, needed to be fed and clothed, given a basic education, nursed when they were sick, and supervised when at work.

Her work followed the weekly and seasonal cycles familiar to all New England farmers. One autumn Friday, she "kill'd hoggs — satt: made candles — monday try'd [the suet] — Tuesday sausages — & by Wed. I was prety well tyr'd out." While her neighbors admired her as an industrious woman, she often found her daily routine exhausting and burdensome. "About 3 in the morning I wak'd with the sick headach," she wrote in 1801; "grew worse puk'd a number of times — but knew I must get up. which I did towards 6. . . ."

As owners of the largest home in the area, the Phelpses were expected to accommodate travelers needing a place to stay. It was not unusual for Elizabeth to feed, lodge, and launder for a household that often expanded from about eight to 25 or 30 people. Her wealth and prominence imposed other obligations on Elizabeth. She was frequently called upon to watch the sick and dying, assist women in labor, and provide home medicines from her garden or kitchen. Her diaries record the family's acts of charity — giving shelter to unwed mothers, taking in infants, responding to crises.

However exalted her social position, Elizabeth Phelps was still a farmer's wife, and the work she did to turn raw materials into goods for use or sale was essential to the family's well-being. One sign of the Phelpses' wealth was the size of their dairy herd. Well into her sixties, Elizabeth was still spending much of her time and energy in the dairy barn. Her skills as a cheesemaker were renowned. In 1805 she reported to her daughter: "I rose this morning before four . . . it is now toward 11 and my cheese will soon be ready to chop the last time, we make more than we ever did . . . Cheese, cheese, hay, hay, cooking cooking, . . . churning every other day sometimes."

Within a few decades, it would be hard to find a well-to-do rural woman who spent her days this way. Many literally moved away from the farm, as both of the Phelpses' daughters did. (One married a storekeeper and the other a minister.) By the mid-1800s, women of means were relying on domestic servants, often young women fleeing poverty in Ireland, to perform chores Elizabeth Porter Phelps and her contemporaries considered the responsibilities of a wife and mother.

Elizabeth Phelps died in 1817 at the age of 69. The year before, her daughter Betsey Huntington had returned to live at Forty Acres with her minister-husband and their 11 children. The Huntingtons sold off pieces of the farm to provide for their offspring, most of whom chose to pursue professional careers. After Betsey Huntington's death in 1855, her youngest son turned the house and remaining acreage into a "gentleman's farm." Family members gathered there for summer vacations,and over time the property deteriorated. In the 1920s, James Lincoln Huntington, a prominent Boston physician, began turning the house into a showplace of the Colonial Revival movement. In 1949 he established the Porter-Phelps-Huntington House Museum at Forty Acres; he led many of the tours himself.

Porter-Phelps-Huntington House Museum in Hadley is open from mid-May to mid-October.

The Porter-Phelps-Huntington Family Papers, 1698-1950 are on long-term loan to the Amherst College Archives and Special Collections.