And now, friends, fellow-citizens, as we stand among these honored graves, the momentous question presents itself, which of the two parties to the war is responsible for all this suffering, for this dreadful sacrifice of life - the lawful and constitutional government of the United States, or the ambitious men who have rebelled against it?… I say "rebelled" against it, although Earl Russell, the British Secretary of State for Foreign Affairs,… seems to intimate that no prejudice ought to attach to that word, inasmuch as our English forefathers rebelled against Charles I and James II, and our American fathers rebelled against George III. These precedents do not prove that it was just and proper for the "disappointed great men" of the cotton-growing States to rebel against 'the most beneficent government of which history gives us any account'…" They do not create a presumption even in favor of the disloyal slaveholders of the South, who, living under a government of which Mr. Jefferson Davis… said that it was "the best government ever instituted by man…" rebelled against it because their aspiring politicians, himself among the rest, were in danger of losing their monopoly of its offices.

Someone, who I don't recall, once said there was a time when "Giants roamed Harvard Yard and MIT." Edward Everett must of been one of them.
Login

On this day in 1863, Edward Everett spoke at the dedication of Gettysburg's National Cemetery, giving what is remembered today as the other Gettysburg Address. The Boston orator was the obvious choice for the occasion. During his 40-year career as professor, diplomat, and statesman, he had consistently dazzled audiences with his brilliant oratory. At Gettysburg, Everett held the crowd spellbound for two hours. But his words are not the ones that are remembered from that day. When Abraham Lincoln followed Everett to the podium, the president spoke for only three minutes, but what he said entered the national memory and has remained there ever since. Everett's Gettysburg address lives on, in the words of one historian, "as a foil to that better thing that followed."

Everett graduated from Harvard at the age of 17, receiving the highest honors in spite of being the youngest member of his class. 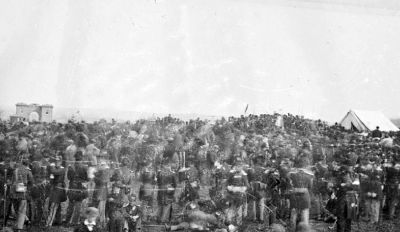 When the armies withdrew from the field after the carnage at Gettysburg, they left behind a hellish scene: 8,000 human corpses and 5,000 dead horses strewn across the Pennsylvania fields. The toll would grow as thousands more succumbed to mortal wounds in the days following the battle. In the summer heat, Governor Andrew Curtain faced a pressing need to identify and bury the dead. But he also felt compelled to give meaning to the bloody tragedy and hope to the future.

Curtain enlisted the help of a leading Gettysburg citizen, David Wills, who immediately acquired 17 acres for a battlefield cemetery and began planning for its dedication. Looking for someone who could with "artful words . . . sweeten the poisoned air of Gettysburg," Wells naturally turned to Edward Everett.

Everett had inherited the mantle of Daniel Webster, the nation's leading orator, at Webster's death in 1852. The Bostonian had long been recognized for his deft and graceful use of language, intuitive dramatic sense, musical voice, and magnetic presence.

Looking for someone who could with "artful words . . . sweeten the poisoned air of Gettysburg," Wells naturally turned to Edward Everett.

Edward Everett was born in Dorchester in 1794. A precocious youth, he graduated from Harvard at the age of 17, receiving the highest honors in spite of being the youngest member of his class. Three years later, after earning a Masters of Divinity degree, he was invited to be the minister at the Brattle Street Church, then Boston's largest and most fashionable congregation, and was installed as pastor before reaching his 20th birthday. After a year in the pulpit, he decided that he preferred scholarship to the ministry and accepted a faculty appointment in Greek literature at Harvard. Since he was only 21 and had only a Master's degree, the university sent him to Europe for two years of further study. He completed a Ph.D. in Germany before returning to Harvard in 1819.

Everett was unusual for a nineteenth-century scholar in having aspirations beyond the university. He left teaching to serve five terms in the U.S. House of Representatives (1825-1835); four (one-year) terms as Massachusetts governor (1836-1839); four years as ambassador to England (1841-1845); Secretary of State under President Millard Fillmore; and one term in the U.S. Senate (1854-1860). In the mid-1840s, he took a break from politics to serve as president of Harvard.

In his lengthy speech, he relived the battle and denounced the enemy. Many in the crowd were moved to tears.

Everett's public service gave him many opportunities to demonstrate his power as a public speaker, and his orations became the stuff of legend. He could hold forth for several hours with such skill and drama that his listeners lost all track of time. After preparing meticulously and producing a text of his speech, once at the podium he customarily set the manuscript aside and spoke from memory. He had delivered memorable speeches commemorating Revolutionary battlefields at Lexington, Concord, and Bunker Hill; now he was expected to find the words to dignify and consecrate Gettysburg.

In the weeks before the dedication, Everett immersed himself in military reports, researching and reconstructing every aspect of the three-day battle so that he could re-create it, step by awful step, for his listeners. He strove, as always, to be an accurate historian and to stir the emotions of the audience. As was his habit, he sought to elevate the oration by invoking comparisons to Greek antiquity. In his lengthy speech, he relived the battle and denounced the enemy. Many in the crowd were moved to tears.

"I should be glad, if I could flatter myself that I came as near to the central idea of the occasion, in two hours, as you did in two minutes."

Then Lincoln rose to speak. Unlike Everett, he did not relive the battle; in fact he never mentioned Gettysburg, the Union, or slavery. Instead, as Garry Wills wrote in his book on the Gettysburg address, the president reached "beyond the historical particulars,. . . [to] derive a new, a transcendental, significance from this bloody episode." In only 285 words, he "wove a spell that has not, yet, been broken — he called up a new nation out of the blood and trauma."

Edward Everett was quick to acknowledge the greatness of Lincoln's brief speech. The day after the ceremony, he wrote to the president praising the "eloquent simplicity & appropriateness" of his remarks. "I should be glad, if I could flatter myself that I came as near to the central idea of the occasion, in two hours, as you did in two minutes." Lincoln sent an immediate and gracious response: "In our respective parts yesterday, you could not have been excused to make a short address, nor I a long one. I am pleased to know that, in your judgment, the little that I did say was not entirely a failure."

Edward Everett's birthplace, Dorchester, Massachusetts, features several memorials to its famous son: Edward Everett Square, a marker and plaque marking the former location of his birthplace, and a statue in Richardson Park.

Lincoln at Gettysburg: The Words that Remade America, by Garry Wills (Simon and Schuster, 1992).