A GALA DAY AT DUXBURY

Laying of the Corner-Stone of the Myles Standish Monument Yesterday—Military and Civic Procession—Speeches, Etc.

The corner-stone of the monument in process of erection to the memory of Myles Standish was laid in Duxbury yesterday with civic and military honors. Two special trains left this city shortly after nine o'clock yesterday morning, one having on board the Ancient and Honorable Artillery Company and the Masonic fraternity, and the other the invited guests of the Standish Monument Association. These trains arrived in Duxbury a few minutes before eleven o'clock…

After devotional services, conducted by Rev. Dr. Quint of New Bedford, R. W. Grand Chaplain, Gen. Horace Binney Sargent, president of the Monument Association, delivered an eloquent address, concluding as follows: Not only to the memory of Myles Standish, as the type of fearless and honest vigor in public service as soldier and civilian, but also in a reverent spirit of remembrance and grateful honor to the citizen soldiers of New England, from the landing of the Pilgrims to the present hour, do we lay this corner-stone today. . . .

Mr. John McClellan . . . read the inscription and a list of the contents [of the box], which follows:

Programme of the exercises, October 8, 1872; plate and proof, and other papers of the association and history of Myles Standish, also a list of officers of the association; acts and resolves of the State of Massachusetts, 1872; records of the various counties of Massachusetts; History of Duxbury; catalogue of Prince's Library deposited in the Public Library; catalogue of Harvard College; catalogue and other papers of Amherst College; Proceedings of the American Antiquarian Society; Papers from the Massachusetts Historic-Genealogical Society; Catalogue and papers form Tufts College; Catalogue and papers from Brown University; Silver plate of Roster of Ancient and Honorable Artillery Company; List of Officers and Chaplains Ancient and Honorable Artillery Company; List of Officers and other papers of Massachusetts Charitable Mechanic Association; Adjutant General's Report of Massachusetts, 1871; Records of the Companies of the Military of the State; Hingham Journal of October 4, 1872; The Commonwealth, Boston, October 5, 1872; Old Colony Memorial, Plymouth, October 3, 1872; Company C, First Regiment Infantry, M. V. M., Claflin Guard; Concord Artillery and other Military companies of the State of Massachusetts; Current Newspapers fo Massachusetts; Proceedings of the Cable celebration at Duxbury; Many other documents; a piece of our Forefather's Rock….

The Grand Master, after an examination of the stone, declared it square; the box was placed and wedged in position; the block was consecrated with corn, wine and oil, and duly laid by the Grand master according to the form prescribed in the Masonic ritual; the blessing of God was invoked upon the workmen, and the desire expressed that the monument should perpetuate the memory of the pioneer leader whose remembrance it was intended to promote.

A song was then sung to the tune of America, written by Mr. W. T. Adams, and the ceremonies ended. At the conclusion of these the Masons and artillery formed in line and marched down to the foot of the hill by the sea-shore, to participate in a clam-bake. Through some mistake or other the clam-bake was not a success, the clams not being sufficiently cooked. The companies made a very brief stay at the clam–bake and then returned to dinner….

On this day in 1872, a crowd of 10,000 climbed to the top of Captain's Hill in Duxbury to watch the cornerstone being laid for the Myles Standish Monument. Military leader of the Plymouth Colony, Standish became a popular national hero when Henry Wadsworth Longfellow published his fictionalized poem, "The Courtship of Myles Standish," in 1858. The Massachusetts state government and private individuals, including President Ulysses S. Grant, contributed to the memorial. It took 28 years to raise all the money needed. When it was finally finished in 1898, the 116-foot tall shaft, with a 14-foot statue of Standish at the top, was rivaled only by the Washington Memorial as a U.S. monument to an individual citizen.

His detractors caricatured the short-statured Standish as hot-tempered "Captain Squirt." 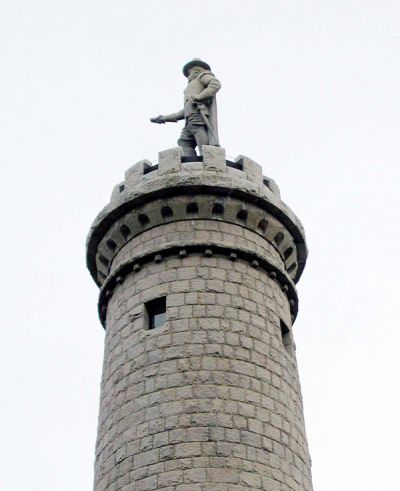 In1872, Myles Standish was a hero not only in Massachusetts but to the whole nation. With the rapid growth of industrialization and immigration, the decades after the Civil War brought a period of dramatic change for the United States. Many Americans responded by making the founders of the colonial period into national heroes. Chief among these was Captain Myles Standish.

According to family tradition, Longfellow's "Courtship of Myles Standish" tells a mostly fictional story of the middle-aged captain losing the hand of lovely Priscilla Mullins to the dashing young John Alden. Although Myles Standish was not in fact the hero of a great romance, he was an experienced and capable military leader who was widely respected by the Plymouth colonists for his success defending the young colony from internal and external threats. Looking back from the late nineteenth century, Americans found in Myles Standish a worthy figure to revere.

He was born around 1587 in Lancashire, England, near his ancestral home of Duxbury Hall. After an education at the local grammar school, he was sent to Holland where the Dutch were fighting for independence from Spain. It was a good place to learn soldiering. Standish became acquainted with a group of English Pilgrims who, seeking to separate themselves from the Church of England, had settled in the Dutch city of Leyden. When the English community decided to leave Holland for the New World in 1619, they chose Standish to be their military leader.

Standish played a near-mythic role in Plymouth Colony. He led the first party to come ashore when the Mayflower reached Massachusetts. He commanded exploring parties, directed defense against occasional Indian actions, and was instrumental in sustaining the group through the hunger, sickness, and death that afflicted them during the first winter in Plymouth. Later, he led rescue missions, put down rebellions, and rebuffed French traders who were encroaching on the Pilgrim settlement.

. . . he "bore a deep share of their first difficulties, and was always very faithful to their interest."

Standish was not only a military leader but, like the rest of the Pilgrims, he was also a farmer. He farmed 100 acres in the southern section of Plymouth, in an area that later became Duxbury. Both his farm and his family prospered.

His detractors caricatured the short-statured Standish as hot-tempered "Captain Squirt," but most of the colonists respected him. As one said, he "bore a deep share of their first difficulties, and was always very faithful to their interest." In time, he was chosen treasurer and later commander-in-chief of the colony.

The monument to Myles Standish was built on the hill that was the highest point on what was once Standish's farm. From its base at 200 feet above sea level, the monument rises another 116 feet from foundation to parapet and offers panoramic views over the original Plymouth Colony. The monument is crowned by a statue of Standish, holding the charter of Plymouth Colony in his hand and gazing eastward across Massachusetts Bay.

The Myles Standish Monument and grounds have been owned by the Commonwealth of Massachusetts since 1920; managed by the Department of Conservation and Recreation, they are open to the public on a seasonal basis.

On this day in 1964, a raging wildfire crossed the boundaries of Myles Standish State Forest, and into the town of Plymouth. Two days earlier flames had consumed 800 acres of the forest, but firefighters...

On this day in 1909, two young girls, using ropes and a pulley, helped haul the last stone into place to complete the Pilgrim Monument in Provincetown. The town's Yankee residents had long been seeking...