OF THE CUP TO THE FOUNDER'S PASSING

The drive-throughs were not draped in memorial bunting, the jelly doughnuts weren't emblazoned with dark chocolate bands. And when customers ordered their coffee black this weekend, it probably wasn't out of respect.

Dunkin' Donuts founder William Rosenberg, the man who helped wake up countless New Englanders who never knew his name, died Friday of cancer at 86 at his Mashpee home.

To those who study business, Rosenberg was an icon — an eighth-grade dropout who built one of the most successful fast-food businesses on the planet. To police and firefighters working the dreaded double shift, he was a godsend at the dreariest hours. To dieters, he was the devil: temptation never tasted as good as one of his honey-dipped crullers.

"There's just no substitute for Dunkin' Donuts," said Scott Saylor, 36, while visiting the original Dunkin' Donuts on the Southern Artery in Quincy yesterday. "I'm here three or four times a day. I've helped make Mr. Rosenberg a very wealthy man. I didn't know he had died - I'll take a moment of silence today before I take my first sip."

Mr. Rosenberg, without doubt, was a great businessman who especially knew how to market products. The name Dunkin Donuts came about from producing a donut with a handle on it; thus, making it easier to dunk in your coffee.
Login

On this day in 2002, Dorchester native William Rosenberg, who made a morning stop for coffee and donuts a national habit, died at the age of 86. In a classic rags-to-riches story, the Dunkin' Donuts founder was a poor boy with only an eighth-grade education. In 1950 he opened his first shop in Quincy. It sold excellent coffee and donuts and was an immediate success. In 1955 he began licensing franchisees to use the Dunkin' Donuts name and sell his products. He realized that in an increasingly mobile age people would welcome a familiar and trusted name. And they did. Dunkin' Donuts, based in Canton, Massachusetts, is now the world's largest coffee and baked goods chain, serving more than 2,700,000 customers every day.

Many predicted the business would fail, especially at the prices he charged: five cents for a donut and ten cents for a cup of coffee. 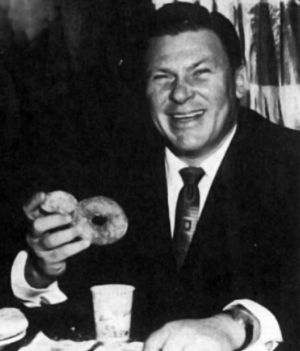 In an autobiography written the year before he died, "Mr. Donut" Bill Rosenberg talked about living the American Dream. Born to immigrant Jewish parents in 1916, he grew up in a working-class Dorchester neighborhood. Rosenberg remembered a childhood with few "niceties" but ample supplies of family, friends, and food. His father ran a neighborhood grocery store. A favorite memory was the weekly trip to Faneuil Hall Market to buy wholesale goods from the farmers, fishermen, and butchers there. The highlight was visiting the Faneuil Hall diner that sold "the biggest nickel jelly donuts you ever saw. . . . It was fantastic!" he remembered 80 years later.

Like so many other businesses, the elder Rosenberg's barely survived the Depression. At 14, Bill Rosenberg left school to help support the family. Hawking ice cream from a cart in the summer, he discovered that he was a born salesman and entrepreneur. At 17 he landed a job driving an ice cream truck. It was the depths of the Depression, and several men had already failed in the Jamaica Plain territory he was given. But Bill Rosenberg was determined to succeed. He used his business sense to figure out the most profitable route. He was so successful that his employers moved him to Milton, one of their top 10 routes, where he quickly gained a following by painting on the front of his truck "HERE COMES BILL" and on the back "THERE GOES BILL." By the time he was 20, the company had promoted him to a management position.

The highlight was visiting the Faneuil Hall diner that sold "the biggest nickel jelly donuts you ever saw. . . . It was fantastic!" he remembered 80 years later.

Rosenberg married and began a family. But when World War II broke out, he left the ice cream business to work at the Quincy shipyards. Quincy would be the site of Rosenberg's breakthrough. He realized from his shipyard experience that employees of large industries had few options for refreshment. He recognized a need and an opportunity. After the war, he bought several army surplus vehicles and converted them into mobile canteens that brought coffee and lunch to the shipyard workers. When he realized that nearly half his sales were from coffee and donuts, he took a leap of faith. On Memorial Day weekend in 1950, he opened a small shop in Quincy that specialized in good coffee and fresh donuts. Many predicted the business would fail, especially at the prices he charged: five cents for a donut and ten cents for a cup of coffee.

But the store was an immediate success, and soon Rosenberg was grossing over $5,000 a week just from coffee and donuts. The only thing he was not pleased with was the name — the "Open Kettle" —which he soon changed to "Dunkin' Donuts." Soon there were Dunkin' Donut shops at busy intersections in Somerville, Natick, Saugus, and Shrewsbury. Waiting customers could watch through huge glass windows as the bakers made the donuts.

Waiting customers could watch through huge glass windows as the bakers made the donuts.

Bill Rosenberg knew that there was room for much more growth, but a limit to how many shops he could oversee himself. He decided to follow the example of another Quincy entrepreneur — Howard Johnson. Although Johnson was not the first to franchise his business, he was one of the most successful.

Howard Johnson had opened a soda fountain in the Wollaston section of Quincy in 1925. He developed a secret recipe for his ice cream — double the butterfat. The restaurant gained a reputation for high quality ice cream and sandwiches. Johnson understood that in a nation increasingly in love with the automobile people would be traveling to new places; a restaurant that reminded them of home would do well. His idea was to capitalize on his reputation by selling the right to use the Howard Johnson name and to serve his products.

Johnson created a distinctive and highly visible building design — a bright orange cupola-topped roof with a "Simple Simon and the Pieman" weathervane. His franchisees were located along busy highways where they served as a beacon to travelers. By 1954, when Howard Johnson expanded into the motel business, there were over 400 "HoJo's" in the U.S.

Bill Rosenberg knew that there was room for much more growth, but a limit to how many shops he could oversee himself. He decided to follow the example of another Quincy entrepreneur — Howard Johnson.

Bill Rosenberg noted Johnson's success and believed that Dunkin' Donuts was an ideal business for franchising. In 1955 the first Dunkin' Donuts franchise opened in Dedham. Rosenberg worked hard to spread the company's brand. Just as Howard Johnson offered 28 flavors of ice cream, Dunkin' Donuts would sell 52 varieties of donuts, enough so that stores could advertise a different special each week of the year. The chain spread into neighboring states; by the 1970s, there were 1,000 shops across the nation and around the world. There are now over 12,000 Dunkin' Donuts stores in over 35 countries, including Thailand, Indonesia, the Philippines, and South Korea.

The first Dunkin' Donuts is located at 541 Southern Artery in Quincy. It was recently renovated with a "retro" look.

Learn more about Quincy's history at the Quincy Historical Society.

America’s Landmark: Under the Orange Roof https://www.eater.com/2017/2/14/14601970/last-howard-johnsons-lake-george-new-york Eater: The Last Howard Johnson’s in the Universe

Sammarco, Anthony Mitchell, A History of Howard Johnson's: How a Massachusetts Soda Fountain Became an American Icon (The History Press, 2013).

On this day in 1980, fire destroyed the original Legal Sea Foods fish market and restaurant in Cambridge. The restaurant re-opened, but the business soon outgrew the neighborhood. Today there are 30 family-owned Legal Sea...