Bob Oakes, Anchor [WBUR radio]: In July of last year, two producers from the NPR program "Living on Earth" came to John Ogonowski's farm to interview him about the immigrant farming project.

[John] Ogonowski: My family, they're—they're all immigrants. They came over here and had to—had to start farming over here, so it was—it sounded like a good chance to get—get some people farming who were farmers in their country before and now they're—they're living in—in a city environment (sic). So they—they had the desire to—to farm and we had the land, so we got together.

Reporter: It sounds like it was really easy, but I know that you're actually doing a lot for them.

Mr. Ogonowski: Yeah, it's probably a break even for me. I don't make money on it, I don't lose money on it, and as long as I have a little excess land available, I'll continue to do it.

Oakes: What Ogonowski didn't say in this interview is that he rarely collected the $300 per acre rent. He purchased supplies for the farmers without asking to be reimbursed. He plowed and harrowed their fields into perfect rows.

Project director Hugh Joseph says there was virtually no end to what he would do for them.

Mr. Joseph: Providing training and technical assistance to the farmer, or helping to get a shed put up, or putting up irrigation, or getting the greenhouse in order, or going and getting parts and supplies, or getting the machinery fixed for them and telling them where to market, you know, all of these little bits of information, now—now it's staff that provides that because he's not there.

Oakes: Hugh Joseph says the project may have eventually developed a staff anyway to relieve some of John's workload, but his death forced it to grow up very quickly. Now a farm manager comes to the plots to give the Cambodian growers the help that John used to provide, and as with any work that out lives its originator, there are growers now tending John's land who never knew him. . . .

Mrs. Peggy Ogonowski: Having the Cambodian farmers here is a great source of comfort to me.

. . . It was a program that John very much enjoyed being a part of, and we've received a lot of help in keeping it ongoing, and I think that it will add to his legacy that we keep the Cambodian farmers working here and that we're helping attain more acreage for them and that the program is growing . . . I was glad to continue it. I just feel terrible that they've lost their mentor. I can't mentor them. He was the farmer. He had all of the knowledge. He's the one that understood about growing cycles, about pesticides. I don't have any of that knowledge.

Oakes: But it wasn't just John's knowledge that the Cambodian farmers appreciated about him. John was a friend to them. . . . John was a humble man. He never sought recognition for what he did. Six weeks before his death he told NPR that what motivated him was his love of the land.

Mr. Ogonowski: I think once a person is a farmer, they're a farmer for life. They're hooked. I don't know if the children of these farmers are going to be so active in it, but they may be because these Cambodians, they bring their whole families out here. You'll see the kids out there weeding and picking the crops, so they may take a liking to it.

[Reporter]: Do you have children that will continue in farming, John?

Mr. Ogonowski: I hope so. I have three daughters, and they're good workers. They pick blueberries and sell pumpkins, and hopefully they'll continue so I can retire.

probably not the year for this particular moment

Since Mr. Ogonowski's brother is running for Congress this year, it probably would have been better to have run this particular Mass Moment some other Sept. 11 -- hate to see you run the risk of even seeming to be politicized.. ------------------------- W. David Stephenson | Principal | Stephenson Strategies D.Stephenson@stephensonstrategies.com 335 Main St., Medfield, MA 02052 | (508) 359-5112 *author: "a web strategy for better state government" in Massachusetts
probably not the year for this particular moment

This MassMoment has been in circulation for several years.
probably not the year for this particular moment

I am thrilled to be reminded of Capt. Ogonowski and the healing work he did. I have seen this before, and it brought tears to my eyes again. Rest in peace kind hero.
Login

On this day in 2001, American Airlines pilot John Ogonowski made the familiar drive from his farm in Dracut to Logan airport. He was sorry he would miss a special event scheduled for later that day. Federal officials were coming to inspect the work of Cambodian immigrant farmers who leased land from Ogonowski. A fourth-generation Massachusetts farmer, he was an active participant in the New Entry Sustainable Farming Project which helps immigrants carry on their agricultural traditions, while protecting farmland from development. When the officials arrived at the farm, they learned that the plane Ogonowski was piloting had been hijacked and flown into the World Trade Center. The New Entry Sustainable Farming Project continues, a living memorial to John Ogonowski.

Twelve days a month, he donned his senior captain's uniform and flew jumbo jets for American Airlines. The rest of the month he wore jeans and a flannel shirt as he tended the 150-acre hay and vegetable farm. 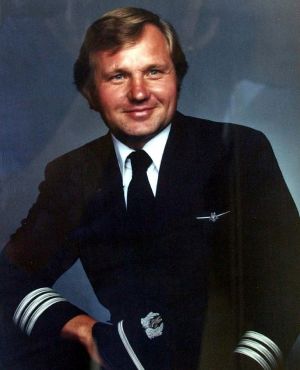 John Ogonowski was the fourth generation of his family to till White Gate Farm in Dracut, a place he dearly loved. He grew up working the farm, but left home in 1972 to join the Air Force. After serving in Vietnam, he became a commercial pilot. When he married, he brought his wife Peggy home with him to the family's farm. There the couple raised three daughters.

Twelve days a month, he donned his senior captain's uniform and flew jumbo jets for American Airlines. The rest of the month he wore jeans and a flannel shirt as he tended the 150-acre hay and vegetable farm, read agricultural journals, and worked to preserve what was left of Dracut's farmland.

His great-grandfather had immigrated from Poland at the turn of the century and settled in the Merrimack Valley, just north of Lowell. The local farmers were welcoming, sharing their knowledge, lending tools, and helping the newcomers as they settled in. By the time John grew up, members of his extended family lived on farms all around him.

"When you plant a building on a field," he would say, "it's the last crop that will grow there."

In the 1980s, suburban development pressures reached Dracut, and subdivisions began to appear in fields that had been farmed only the year before. John Ogonowski actively resisted development. "When you plant a building on a field," he would say, "it's the last crop that will grow there." In 1998 he helped found the Dracut Land Trust, which worked to conserve the town's open space and farmland. But he realized that preserving the land would not necessarily preserve the agricultural heritage of the area. As the bumper sticker on his pickup said, "There is no farming without farmers." John Ogonowski wanted to bring people back into farming.

So did Paul Fischer of the Farm Service Agency in Westford. In 1998 Fischer was looking for land that Southeast Asian families living in Lowell could farm. These recent immigrants wanted both to reconnect with their agricultural traditions and to produce Asian vegetables not available in conventional supermarkets. When Ogonowski learned of Fischer's project, he immediately saw an opportunity to provide these newcomers with the kind of help his great-grandfather had received from his Yankee neighbors, while also increasing the number of farmers in his part of the state.

NouChea Kim of Lawrence, a Cambodian refugee who leased land from Ogonowski, said "Farming connects me to the land and reminds me of my parents. I do this to help the next generation know their roots."

Ogonowski became deeply involved with the New Entry Sustainable Farming Project, which matched immigrant growers with mentors who would lease them small plots of land, teach them how to adapt their methods to New England conditions, and support their efforts to grow produce for local markets. He leased 12 acres to seven different families, although he rarely collected the $200 rent. He made his own farm the first all-commercial "mentor farm," a training site for beginning growers. He involved himself in every aspect of the enterprise, ploughing and harrowing the immigrants' plots, providing compost and supplies, setting up an irrigation system, building a greenhouse, repairing machinery, and providing advice.

The program was a success. Cambodian immigrants grew bok choi, water spinach, lemon grass, pigweed, Asian basil, Asian squash, coconut amaranth, pickling spices, pea tendrils, and other vegetables from their homeland. They found buyers not only in nearby immigrant communities but in Boston's high-end restaurants. One farmer reported making a profit of $5000 from a three-acre plot; others talked of the joy and sense of connection that farming brought them. NouChea Kim of Lawrence, a Cambodian refugee who leased land from Ogonowski, said "Farming connects me to the land and reminds me of my parents. I do this to help the next generation know their roots." In 1999 Ogonowski told The Boston Globe, "These guys are putting more care and attention into their one acre than most Yankee farmers put into their entire 100 acres."

Within a year, the two congressmen had secured federal funds for the Dracut Land Trust to purchase the farm, on the condition that it would be leased to Asian immigrants.

As the 2001 harvest approached, a group of government officials was slated to visit the Ogonowski farm. On the morning of September 11th, the immigrant farmers were preparing a special luncheon when news that John Ogonowski had been killed at the World Trade Center reached White Gate Farm. Shocked and grief-stricken, they left the farm. For a week, it remained closed.

But the Ogonowski family was determined that John's dream would not die. Ogonowski and other members of the Dracut Land Trust had been working to raise $760,000 to purchase a 33-acre farm that was slated to become a golf course and houses. John's sister Carol contacted Sen. Edward Kennedy and Rep. Martin Meehan for help. Within a year, the two congressmen had secured federal funds for the Dracut Land Trust to purchase the farm, on the condition that it would be leased to Asian immigrants. Two years after the September 11th attacks, the farm was dedicated as a living memorial to John Ogonowski.

Many small farms, including those run by new Americans and those on historic farmland, participate in local farmers' markets. Find nearby markets and farms.

Out of the Blue: The Story of September 11, 2001 From Jihad to Ground Zero, by Richard Bernstein and the staff of the New York Times (Times Books, 2002).

On this day in 1845, John Chapman died having made a fortune planting apple saplings on the American frontier. Born and raised in Leominster, the man remembered as "Johnny Appleseed" left Massachusetts in the 1790s...