THE Small-Pox, which had been a Terror to New-England since first it paid a Visit there, coming into Boston, and spreading there in April, 1721, put the Inhabitants into great Consternation and Disorder. Dr. Mather, in Compassion to the Lives of the People, transcrib’d from the Philosophical Transactions of the Royal Society, the Accounts sent them by Dr. Timonius and Pyllarinus of inoculating the Small-Pox in the Levant, and sent them to the Practitioners of the Town, for their Consideration thereon. Upon reading of which I was very well pleas’d, and resolv’d in my Mind to try the Experiment; well remembering the Destruction of the Small-Pox made 19 Years before, when last in Boston; and how narrowly I then escap’d with my Life. Now, when my Wife and many others were gone out of Town to avoid the Distemper, and all Hope given up of preventing the further spreading of it, and the Guards were first removed from the Doors of infected Houses, I began the Experiment; and not being able to make it upon my self, (such as my Faith in the Safety and Success of this Method) I chose to make it (for Example sake) upon my own dear Child, and two of my Servants.

JUNE the 26th, 1721. I inoculated my Son Thomas, of about six, my Negro Man, Jack, thrity six, and Jackey, two an half Years old. They all complan’d on the 6th Day; upon the 7th, the two Children were a little hot, dull and sleepy, Thomas (only) had twitchings and started in his sleep. The 8th, the Childrens Fevers continued, tommy’s twitchings and startings in sleep increased; and tho’ the Fever was gentle and his Senses bright, yet as the Practice was new, and the Clamour, or rather Rage of the People against it so violent, that I was put into a very great Fright; and not having any Directions from Dr. Timonius and Pyllarinus concerning this Practice, I had nothing to have Recourse to but Patience, and therefore waited upon Nature for a Crisis (neither my Fears nor the Symptoms abating) until the 9th; when early in the Morning I gave him a Vomit, upon which the Symptoms went off, and the same Day, upon him and the black Child, a kind and favourable Small-Pox came out, of about an hundred a piece; after which their Circumstances became easy, our Trouble was over, and soon they were well.

An Historical Account of the Small-Pox Inoculated in New England, by Zabdiel Boylston, F.R.S., London, 1726.

On this day in 1721, Boston doctor Zabdiel Boylston took a gamble with his young son's life and inoculated him against smallpox. Puritan minister Cotton Mather had learned from one of his slaves that in Africa people did not fear the disease that so terrified Europeans. The Africans placed a small amount of smallpox pus into a scratch on children's arms, thus making them immune to the disease. When an epidemic broke out in Boston in 1721, Mather wanted to try this method. He convinced Dr. Boylston, but other physicians and the public thought the idea barbaric, even sinful. However, when those Boylston inoculated survived, the tide of public opinion began to turn. Within a few years, the once-controversial practice would be routine.

Within a few decades of their first contact with Europeans, the Aztec and Inca succumbed to smallpox death at rates as high as 90%. 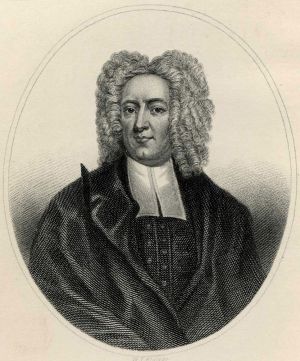 Called "the speckled monster," smallpox was considered "the most terrible of all the ministers of death." Because it spreads through infected saliva droplets, smallpox is easily transmitted by face-to-face contact.

Once a person is exposed to the Variola virus (the scientific name for smallpox), incubation takes about 12 days. Then fever, fatigue, head and backache set in, followed in two to three days by a prominent rash on the face, arms, and legs. Lesions form; they fill with pus and then begin to crust over, with scabs developing and falling off after a few weeks. A third of all victims die; most of those who recover are scarred, and many are left blind.

Smallpox is one of humankind's oldest and most awful diseases. It was present throughout the Old World, and particularly dangerous in crowded port cities such as London. There was no smallpox in the Americas until Europeans brought the virus to the New World. Native people had no chance to build immunity over time. Within a few decades of their first contact with Europeans, the Aztec and Inca succumbed to smallpox death at rates as high as 90%. The indigenous population of New England experienced a similarly disastrous collapse.

The English colonists tried to make the New World a haven from smallpox. Boston inspected all incoming ships; if one arrived with smallpox on board, it flew a quarantine flag and remained isolated until the disease had passed. People afflicted with smallpox were sent to stay — and often die — on Spectacle Island in Boston Harbor, safely distant from the city's population. However, even with these precautions, there was usually a smallpox outbreak every 12 years; each time, patients either survived and acquired immunity or they died.

People afflicted with smallpox were sent to stay — and often die — on Spectacle Island in Boston Harbor, safely distant from the city's population.

An epidemic occurred "on schedule" in 1702 and then, for some unknown reason, not again in Boston for 19 years. As more and more children grew to maturity without being exposed to the pox, Bostonians knew that when the disease did return, it would be more devastating than ever before.

Cotton Mather, the minister famous for his role in the witchcraft trials had watched three of his children nearly die in earlier epidemics. In 1706 he acquired an enslaved man named Onesimus. This African-born man had no fear of smallpox. In his homeland, he told Mather, a little pus from an infected person was inserted into a cut made in the skin of a healthy person. The healthy person usually got a mild case of the disease and soon recovered; exposure to smallpox later in life had no ill effect.

Other enslaved Africans told similar stories, and Rev. Mather became as confident of the safety and success of this operation as he was "that there are Lions in Africa." A decade later, Mather read two different accounts from doctors in Turkey who had discovered that the same method was followed in the eastern Mediterranean. He was convinced that the practice was sound.

Other enslaved Africans told similar stories, and Rev. Mather became as confident of the safety and success of this operation as he was "that there are Lions in Africa."

In the spring of 1721, a group of sailors brought smallpox with them when they came ashore in Boston. As soon as the first cases appeared, the town took dramatic measures to isolate the infected men, but it was too late. By May the city was in the grip of a virulent epidemic.

Mather tried to tell doctors what he knew about inoculation; all but one ignored him. The surgeon Zabdiel Boylston found Mather persuasive and decided to inoculate his own son and two of his slaves.

Controversy erupted the minute word got out. Although the Boston clergy lined up behind Mather and Boylston, the town's physicians and the common people thought the practice barbarous. They called his technique "poisoning" and urged the authorities to charge the doctor with murder if the experiment failed.

James Franklin's newspaper The Courant began publishing attacks on those who supported inoculation. The town's ministers found themselves accused of trying to subvert the will of God. Smallpox, people claimed, "is a judgment of God on the sins of the people, and to avert it is but to provoke him more." Actions as well as words were used to stop the inoculators. Cotton Mather's house was firebombed; Zabdiel Boylston was unable to leave his farm lest he be assaulted. The selectman passed an ordinance prohibiting inoculation in the city.

When news spread that Boylston's son and slaves had fully recovered, people began to defy the ban, seeking out the doctor to get inoculated. By the time the epidemic subsided, Zabdiel Boylston had inoculated 248 people. The procedure was grueling but 98% of his patients survived, compared to 85% of the non-inoculated.

Smallpox, people claimed, "is a judgment of God on the sins of the people, and to avert it is but to provoke him more."

Cotton Mather published the results. Swayed partly by Mather's report and partly by similarly successful experiments in England, in 1722 the British royal family chose to be inoculated — a decision that helped win acceptance for the practice.

New England was slower to adopt inoculation than other regions. Most towns relied on strict quarantines and banned inoculation except during epidemics. Even when inoculation was permitted, the relatively high cost limited access. The disease continued to maim and kill. Over 100,000 people died during a smallpox epidemic that spread throughout North America from 1775 to 1782, coinciding with (and playing a role in) the War for Independence.

And this was by no means the last epidemic. During another outbreak in Boston in 1792, 30% of the afflicted died. The beginning of the end came in 1796 when the English physician Edward Jenner developed the first vaccine that used cowpox; this represented a huge improvement over inoculation with the smallpox virus since when humans contact cowpox, it is a far milder disease than smallpox. It was, one historian wrote, "as if an Angel's trumpet had sounded over the earth."

In 1979 after a decades-long international campaign, the World Health Organization announced a major public health success: the eradication of smallpox.

"Smallpox: The Triumph over the Most Terrible of the Ministers of Death," by Nicolau Barrquet, MD and Pere Domingo, MD in Annals of Internal Medicine, October 1997.

The Fever of 1721: The Epidemic that Revolutionized Medicine and American Politics, by Stephen Coss (Simon and Schuster, 2016).

On this day in 1918, two sailors housed at Boston's Commonwealth Pier reported to sickbay. The men were the first Americans stricken with a strain of influenza that would prove far more dangerous than the...

On this day in 1905, five leprosy patients arrived on Penikese Island in Buzzard's Bay, the site of the first and only leprosarium in Massachusetts. Over the next 16 years, 36 victims of leprosy, or...