“A Miracle in Miami: 65 Yards, BC, Flutie Get Storybook Victory”

The idea does not go away that Doug Flutie simply willed the ball into the end zone. Thought it there.

He threw the ball—sure, he threw it 48 yards on the scoresheet and maybe 65 yards in the air—but that does not begin to explain exactly what happened. Zero seconds left? National television? Forty-eight yards on the last play of the game. To win the game?

“What were you thinking when he ran that play?” coach Bicknell was asked.

How to describe what happened next? Flutie dancing. Flutie Throwing. The ball cutting through the rain. Phelan behind three Miami defensive backs. Phelan catching the ball.

“I landed,” Gerard Phelan said, “and I saw that there was writing on the ground underneath me. I knew that I was in the end zone. I jumped up fast to show the referee I had the ball.”

“I couldn’t exactly see what happened,” Macdonald said. “I thought I saw the ball hit the ground. I turned to shake the hand of the guy I’d been playing against. To congratulate him. Then I saw him just slump over. I turned back to see what happened.”

“I was numb,” Bicknell said. “I ran across the field to shake (Miami coach) Jimmy Johnson’s hand. His face . . . his face was the way I suppose my face would have been if something like that happened to me. I actually felt sorry for him.”

Flutie could not see the catch. He worried that he might have thrown the ball too far. The referee’s upturned arms were the signal that he had not.

He began to run toward Gerard Phelan and the end zone.

“I was under control,” he said. “It’s funny, but while it was all taking place I was pretty good. I wasn’t very emotional at all. It was after it all happened, as I ran down the field, that  got emotional.”

The idea now was to celebrate.

Yes, you're right - an incorrect date (based on the Cotton Bowl game) snuck into the essay. I've fixed it to reflect the actual Orange Bowl date. Thanks!
Login

On this day in 1984, Doug Flutie threw a last-second "Hail Mary" touchdown pass to Gerard Phelan in the end zone, giving Boston College a 47-45 win over the University of Miami. Considered too short and without a strong enough arm to play quarterback, the 5'10" Natick resident became one of the gutsiest players in football. Running away from defenders, buying time for receivers, he threw a Boston College single-year record of 3,454 yards and 27 touchdowns. Passing for over 57,000 yards in his pro career, he won three Grey Cups in the Canadian Football League and led the Buffalo Bills to the playoffs in 1998. As legendary coach John Madden said, "Inch for inch, Flutie in his prime was the best quarterback of his generation."

In a blowout over Army, he broke the college passing record of 10,000 yards. 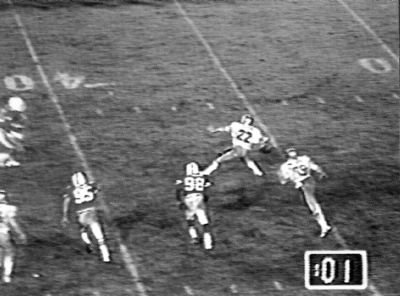 Doug Flutie, one of the savviest players in professional football, was born on October 23, 1962 in Baltimore. As a four year old, he slept with a football in his arms. When Doug was six, the family moved to Florida. Flutie played flag football in neighborhood pickup games, where, in his own words, he "did things with a bit of flair."

He first joined a tackle football team at the age of nine. Since he weighed only 63 pounds, five pounds short of the minimum, he sat on the bench while his older brother played quarterback. Mid-season, Flutie got his chance as a free safety. Two years later, he moved to quarterback but got bored handing the ball off. He asked to play running back and enjoyed it, building the scrambling skills that would become legendary.

The family relocated to Natick, in the Boston suburbs, when Doug was 13. He had a feel for the game. He studied quarterbacks like Terry Bradshaw, Roger Staubach, Fran Tarkenton, and his favorite, Bert Jones. His junior high coach had him memorize formations so that he could call his own plays, which he later said "always made me try to think ahead."

Flutie easily made the Natick High School varsity, rotating in as free safety and wide receiver. In his sophomore year, he took over as quarterback, with his older brother, Bill, playing receiver. Each of them played other positions as well and never left the field. Doug Flutie even kicked a 38-yard field goal to win one game.

Flutie played flag football in neighborhood pickup games, where, in his own words, he "did things with a bit of flair."

Although he was recruited by all the major universities, no Division 1 school offered him a scholarship until Boston College lost out on its first two choices for quarterback. BC gave him a scholarship, not necessarily to play quarterback but because the coaches believed he was a player who would help the team somehow. They were right.

In his first season at BC, an injury sidelined the starting quarterback; when the second and third stringers did not play well, Doug Flutie got his big chance. In his first win against Army, he threw for 244 yards and three touchdowns. Against the University of Pittsburgh, quarterbacked by a young Dan Marino, Flutie held his own, introducing some of the "fancy things" he had become famous for — shoveling the ball to a running back even while falling down, and throwing left-handed. The next year, BC played against the best teams in the country, and many of the games were televised. The team steadily improved, breaking into the top 20 in national polls.

In the home opener of his junior year, Flutie broke Frank Harris' record of 4,555 career passing yards. Named NBC's Sportsman of the Week, he was featured in a Sports Illustrated cover story entitled "A Little Man On Campus," the first time that a BC athlete had appeared on the SI cover.

The Eagles climbed to number 12 in the nation. Season-ticket sales went up, and the games were moved from Alumni Stadium to the 60,000-seat Sullivan Stadium, where the Patriots played.

BC gave him a scholarship, not necessarily to play quarterback but because the coaches believed he was a player who would help the team somehow. They were right.

In his senior year, the team set its sights on the national championship and won its first four games, including a dramatic comeback to upset Alabama. Flutie threw six touchdowns against North Carolina — a Boston College record — and became the first player in BC history to surpass 10,000 yards in total offense. In a blowout over Army, he broke the college passing record of 10,000 yards.

On November 23rd, 1984, BC played then-defending champion Miami in the Orange Bowl. The Miami quarterback was Bernie Kosar, who, as Flutie put it, "threw the hell out of the ball." The two teams went back and forth, up and down the field, with Kosar throwing for 447 yards and two touchdowns and Flutie throwing for 476 yards and three touchdowns. With three minutes on the clock, BC led 41-38. Miami pulled ahead 45-41 with less than a minute left in the game. The Eagles had the ball on their own 20-yard line with 28 seconds to go. With only six seconds remaining, Flutie heaved a desperate "Hail Mary" pass 48 yards into the end zone. Wide receiver Gerard Phelan caught the pass, giving BC the win. The throw has gone down in history as "The Pass." Twenty years later, it remains the defining moment in Boston College athletic history.

As Globe columnist Bob Ryan wrote, Doug Flutie "was a walking advertisement, bringing attention and glory to the school."

The heart-stopping win was more than a sports accomplishment for the college. The Eagles' increase in visibility was a significant factor in BC's emergence as a major national university. The increase in applications for admission and alumni support that followed came to be known as the "Flutie Factor." As Globe columnist Bob Ryan wrote, Doug Flutie "was a walking advertisement, bringing attention and glory to the school."

His performance earned Flutie the 1984 Heisman Trophy. After graduation, he spent several uneventful seasons in the USFL and the NFL, before going to Canada in 1990. As quarterback for the Calgary Stampeders and the Toronto Argonauts, he earned the CFL's Most Outstanding Player award six times. With 41,355 passing yards and 270 touchdowns in his career, he is considered one of the greatest quarterbacks ever to play Canadian football.

Returning to the NFL in 1998, Flutie took over as quarterback for the Buffalo Bills. Under his leadership, the 1-3 team ended with an 8-3 record and a berth in the playoffs; Flutie won a spot playing quarterback in the Pro Bowl. In 2001 he signed with the San Diego Chargers, where in 2003, at the age of 41, he became the oldest player to score two rushing touchdowns in a game and the oldest AFC Offensive Player of the Week. When the Chargers let him go in 2005, the New England Patriots signed him; after backing up Tom Brady for a season, in May of 2006, he retired from pro football to become a sports broadcaster. Doug and his wife Laurie also founded the Doug Flutie, Jr. Foundation for Autism in honor of their son. The foundation provides support for families affected by autism.