From Memorial to the Massachusetts Legislature, 1843

I shall be obliged to speak with great plainness, and to reveal many things revolting to the taste, and from which my woman's nature shrinks with peculiar sensitiveness. But truth is the highest consideration. I tell what I have seen--painful and shocking as the details often are--that from them you may feel more deeply the imperative obligation which lies upon you to prevent the possibility of a repetition or continuance of such outrages upon humanity. . . .

I proceed, gentlemen, briefly to call your attention to the present state of insane persons confined within this Commonwealth, in cages, closets, cellars, stalls, pens! Chained, naked, beaten with rods, and lashed into obedience. . . .

It is the Commonwealth, not its integral parts, that is accountable for most of the abuses which have lately and do still exist. I repeat it, it is defective legislation which perpetuates and multiplies these abuses. In illustration of my subject, I offer the following extracts from my Note-book and Journal:--

Lincoln. A woman in a cage. Medford. One idiotic subject chained, and one in a close stall for seventeen years. Pepperell. One often doubly chained, hand and foot; another violent; several peaceable now. Brookfield. One man caged, comfortable. Granville. One often closely confined; now losing the use of his limbs from want of exercise. Charlemont. One man caged. Savoy. One man caged. Lenox. Two in the jail, against whose unfit condition there the jailer protests.

I give a few illustrations; but description fades before reality.

Dorothy Dix and her Crusade for the mentally ill

I hadn't heard of this woman, and I thank you very much for introducing me to her and her courageous work on behalf of the mentally ill. What horrors she must have seen, yet she kept her focus on solutions. There is much to thank her for. How inspiring!! ------------------------- Karin Zachary
Login

On this day in 1841, Dorothea Dix visited an East Cambridge jail and was appalled to see mentally ill women confined alongside hardened criminals. The 40-year-old teacher and writer had been exposed to the work of English reformers, and now she embarked on a campaign to ensure humane treatment for the mentally ill in America. She began by documenting conditions in Massachusetts. With the help of several powerful men, she used her research to convince the legislature to enlarge the state mental institution in Worcester. Dix then took her crusade to other states, traveling over 30,000 miles in three years. Working largely behind the scenes, she persuaded state governments around the country to assume responsibility for their mentally ill citizens. 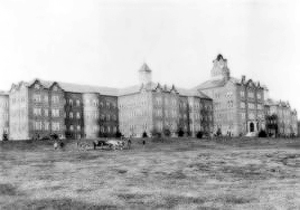 Dorothea Lynde Dix was born on the Maine frontier in 1802, when it was still part of Massachusetts. After an unhappy childhood, Dorothea left home at the age of 12 to live with relatives in Boston and Worcester. She was 14 when she opened her first school for young children in 1816.

For the next 20 years she combined teaching with writing textbooks, poetry, and religious tracts for young readers. She became a devout Unitarian and embraced their religious commitment to work for the good of society. Though she was often in poor health, she traveled to England where she met reformers who were changing the way the mentally ill were treated.

When she was nearly 40, she reached a turning point in her life. A friend asked if she would take over his Sunday School class for women at the East Cambridge prison. On March 28, 1841, Dix went to the jail to teach the class and was shocked by what she found. A number of the inmates had committed only one "crime": they were mentally ill. Dix was appalled to find hardened criminals, feeble-minded "idiots," and the insane incarcerated together in a bare, foul-smelling, unheated jail room.

Angered by what she saw, Dix brought the matter to a local court. Although the authorities denied her charges, they did improve the women's living conditions.

Most people who suffered from mental illness lived in harsh conditions either at home, in prisons, or in poorhouses. 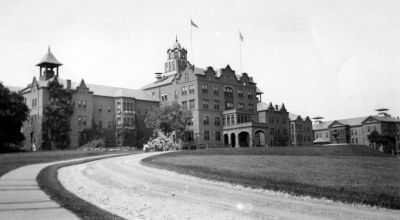 Only a few institutions provided humane treatment for the insane. Most people who suffered from mental illness lived in harsh conditions either at home, in prisons, or in poorhouses. Dix devoted the rest of her life to changing this; with single-minded fervor, she became the "voice for the mad."

She began by surveying every jail, poorhouse, and house of correction in Massachusetts. Dix compiled a lengthy and graphic report on conditions for the insane. Because women were neither seen nor heard at the State House, she enlisted her friend and fellow reformer Samuel Gridley Howe to present her findings to the legislature.

"I have come to present to you the strong claims of suffering humanity," she wrote. "I come as the advocate of the helpless, forgotten, insane men and women held in cages, closets, cellars, stalls, pens! Chained, naked, beaten with rods, and lashed into obedience!"

She described a Danvers woman "in the horrid process of tearing off her skin by inches; her face, neck, and person, were thus disfigured to hideousness." In Newburyport, she observed an insane man confined in an outbuilding next to the "dead room," with corpses for his companions. She related detailed accounts of the mentally ill penned in cold, filthy sheds, without furnishings, daylight, or fresh air. She told of insane men and women who had been left chained to the wall for so long that they resembled wild animals more than human beings.

"I come as the advocate of the helpless, forgotten, insane men and women held in cages, closets, cellars, stalls, pens!"

Dix's "Memorial" urged the legislature to approve funding for "an Asylum for this class, the incurable, where conflicting duties shall not admit of such examples of privation and misery."

Publishers immediately reprinted the report as a pamphlet and included excerpts in newspapers around the state. It created an uproar. Several communities claimed that she had sensationalized and exaggerated her account, or that she had failed to make a full inspection of their facilities. The selectmen in one western Massachusetts town insisted that her report was filled with "bare-faced falsehood, false impression, and false statements." Others objected that the cost of building a state hospital for the insane was prohibitive in difficult economic times.

Dix used her considerable lobbying skills to persuade a group of influential men to take up her "sacred cause." They succeeded in getting the legislature to appropriate the money needed to expand the state hospital for the insane at Worcester.

The selectmen in one western Massachusetts town insisted that her report was filled with "bare-faced falsehood, false impression, and false statements."

Her success in Massachusetts gave Dix credibility with legislatures in other states. She prepared "memorials" designed to inform lawmakers and shame them into acting. In 1843 there were 13 mental hospitals in the country; by 1880 there were 123, and Dorothea Dix played a direct role in founding 32 of them. She was committed to other causes, especially prison reform and education for the blind, but the mentally ill remained her primary concern.

Her skill as a lobbyist made her the most politically active woman of her generation, but her most ambitious campaign—for federal land grants to endow state mental hospitals—ended in failure. When the Civil War broke out, Dix hoped to become the American Florence Nightingale, but her tenure as Superintendent of Women Nurses for the Union was not a success. After the war, she returned to her work on behalf of the mentally ill until she herself became infirm. She spent her last years in the guest quarters of a state hospital she had helped found 35 years earlier; she died in 1887 at the age of 85.

Dorothea Dix is one of six women included in "Hear Us," a work of art honoring the contributions of women to public life in Massachusetts permanently installed in the State House in the fall of 1999.

Dix is one of four Worcester area women honored with portraits in the city's historic Mechanics Hall.

Online resource: Disability History Museum NPR: ‘Architecture Of An Asylum’ Tracks History of U.S. Treatment of Mental Illness A large part of Dix’s “Memorial” to the Massachusetts legislature is available online. Digitizing Dorothea Dix at the National Library of Medicine

Voice for the Mad: the Life of Dorothea Dix, by David Gollaher (Free Press, 1995).

On this day in 1844 G. Stanley Hall was born in Ashfield. This farm boy from western Massachusetts would become the father of psychology in America. His career was marked by many firsts. In 1878...