... In visiting over fifty libraries, I was astounded to find the lack of efficiency, and waste of time and money in constant recataloging and reclassifying made necessary by the almost universally used fixt system where a book was numbered according to the particular room, tier, and shelf where it chanced to stand on that day, insted of by the class, to which it belongs yesterday, today, and forever...

For months I dreamd night and day that there must be somewhere a satisfactory solution. In the future were thousands of libraries, most of them in charge of those with little skil or training. The first essential of the solution must be the greatest possible simplicity. The proverb said, 'simple as a, b, c," but stil simpler than that was 1, 2, 3. After months of study, on Sunday during a long sermon by Pres. Stearns, while I lookt stedfastly at him without hearing a word, my mind absorbed in the vital problem, the solution flasht over me so that I jumpt in my seat and came very near shouting "Eureka!" It was to get absolute simplicity by using the simplest known symbols, the arabic numerals as decimals with the ordinary significance of nought, to number a classification of all human knowledge in print.

According to the University of Central Florida's website, Dewey's ashes were interred at the chapel of the Lake Placid Club in Lake Placid, NY, after he was cremated in Florida. The page also includes the bill for his funeral. http://library.ucf.edu/SpecialCollections/Exhibits/CareyHandExhibit.asp
Dewey spelling.

Ironic that the Dewey Decimal System was first used at Amherst College considering that most colleges and university's use the Library of Congress system.
Login

On this day in 1873, Amherst College junior Melvil Dewey made a proposal to the faculty. He had been working in the college library and was frustrated by the lack of logic in the way the books were shelved. Long obsessed with order and efficiency, Dewey pondered the problem until he suddenly thought of using decimals to create a simple, standardized system for cataloging and arranging libraries. The faculty was so impressed with Dewey's plan that they let him reorganize the library's holdings. After graduation, he was appointed Acting Librarian. In 1876 he published a pamphlet about his method, and libraries all over the country soon adopted what has been known ever since as the Dewey Decimal System.

As an adult, he used his own self-invented spelling in all his correspondence, generally signing his name "Melvil Dui." 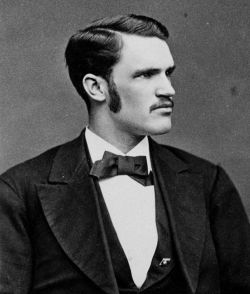 Melvil Dewey had a passion for order and no tolerance for waste. A close brush with death early in his life — as a teenager, he had nearly suffocated while saving books during a fire in his school library — left him with a heightened consciousness of his mortality. As a result, he became enthralled with systems and devices that saved labor — and, more importantly, time. He championed the metric system, shorthand writing, and "fonetic" spelling. But his greatest contribution was developing the library classification system still in use today: the Dewey Decimal System.

Melville Dewey was born in 1851 in upstate New York. His father was a bootmaker and storekeeper, and the Deweys struggled to make ends meet. By both tradition and necessity, it was a hardworking and thrifty family. After young Melville nearly lost his life, he became preoccupied with frugality and efficiency. At 16, he analyzed his father's bookkeeping and concluded that disorganized credit practices were causing the store to lose money. His father promptly sold it, and the family moved to Oneida, NY.

It was about this time that Melville Dewey became frustrated with the complexities of American spelling. An ardent proponent of simplified spelling, by his late teens he had shortened his name from Melville Louis Kossuth Dewey to simply Melville Dewey. Later he dropped the silent letters at the end of his first name and became simply "Melvil." As an adult, he used his own self-invented spelling in all his correspondence, generally signing his name "Melvil Dui."

". . . he could work a problem in arithmetic in his head quicker than the others could on paper. He was like lightning in his calculations." 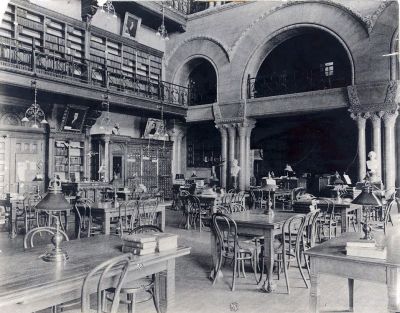 His love of order made him an excellent student of mathematics. He appreciated the logic of mathematics and excelled in mental calculations. One of his teachers remembered that "he could work a problem in arithmetic in his head quicker than the others could on paper. He was like lightning in his calculations." An aunt recalled the boy's "mania for system and classification. It was his delight to arrange his mother's pantry, systematizing and classifying its contents."

Dewey was 19 by the time he had saved enough money from teaching school to enter Amherst College. During the last two years of his studies, he worked in the college library where he brooded over the disordered and inefficient way books were arranged. There was no uniformity; every library used its own classification system, and most organized books by assigning them a specific spot on a certain shelf. Of course, each time a new book was added, all the other books had to be reclassified.

As cheaper paper became available in the mid 1800s, the number of books being published increased exponentially. Libraries faced an increasingly serious problem. In the odd spelling he favored, Dewey later described how the solution came to him: "After months of study, one Sunday during a long sermon by [the college president], while I lookt stedfastly at him without hearing a word, my mind absorbed in the vital problem, the solution flasht over me . . . shouting 'Eureka!'" Melvil Dewey's solution was a system that used arabic numerals in combination with decimals to classify books by their contents.

"The system is easily understood and applies equally well to a library of hundred volumes or of a million, it being capable of indefinite and accurate growth . . ."

When Dewey presented his system to the Amherst Library Committee, the members were so impressed that they let him implement it at the college library. They also gave him the post of assistant librarian. At the end of the year, he reported that the project was a success: "The system is easily understood and applies equally well to a library of hundred volumes or of a million, it being capable of indefinite and accurate growth; the system growing with the books in the same direction and at the same rate, an exceedingly desirable thing, wholly unattainable by any other plan yet proposed."

Later, Dewey would write about the benefits of his system in the first issue of the American Library Journal: "cataloging [and] indexing, . . . are to be done once for all the libraries, at a vast reduction [in cost] to each institution. . . . [A] much larger percentage of the income is therefore made available for the books."

Dewey continued to work in the Amherst College Library after he graduated in 1874. Two years later, he published A Classification and Subject Index for Cataloging and Arranging the Books and Pamphlets of a Library. His system was soon widely adopted.

In 1876 Dewey left Amherst for Boston where he helped found the American Library Association and the American Library Journal; he played leading roles in building both the organization and the journal. He also started a successful business. Believing that all libraries should use standardized materials, from furnishings and shelving to card pockets and date stamps, he formed a company that furnished "libraries with equipment and supplies of unvarying correctness and reliability." Not surprisingly, the company's catalog used the Dewey Decimal System.

In 1883 Dewey moved from Boston to New York City. He would spend the rest of his career working to establish library science as a respected profession. He founded the first "School of Library Economy" at Columbia University and helped ensure the "feminization" of the new profession by admitting women to its first class.

While Dewey never returned to live in Massachusetts, he maintained a lifelong affection for Amherst. In 1881, he wrote, "Sum day, dear Amherst, may it be my happy lot tu pruv how great iz the love I bear yu. Proud, always, everwher to be counted among yur sonz, I am Very truly, Melvil Dui."

The Amherst College Library Records, 1833-1977 include those kept by Melvil Dewey during the years he spent working at his alma mater's library and creating the cataloging system. Morgan Hall (on the Amherst College campus) was the library building during Dewey's time.

The Dewey Program at the Library of Congress Amherst College Library Records, 1833-1977

Dictionary of American Biography, Supplement I.

On this day in 1947, self-made millionaire John Deferrari donated over $1,000,000 to the Boston Public Library to express his gratitude to the institution he credited with his success. The son of poor Italian immigrants,...