My dearly beloved Brethren and Fellow-Citizens:

Having travelled over a considerable portion of these United States, and having, in the course of my travels, taken the most accurate observations of things as they exist, the result of my observations has warranted the full and unshaken conviction, that we (coloured people of these United States) are the most degraded, wretched and abject set beings that ever lived since the world began; and I pray God that none like us ever may live again until time shall be no more. They tell us of the Israelites in Egypt, the Helots in Sparta, and of the Roman slaves, which last were made up from almost every nation under heaven, whose sufferings under those ancient and heathen nations were, in comparison with ours, under this enlightened and Christian nation, no more than a cypher ….

I will ask one question here — Can our condition be any worse? — Can it be more mean and abject? If there are any changes, will they not be for the better, though they may appear for the worse at first? Can they get us any lower? Where can they get us? They are afraid to treat us worse, for they know well, the day they do it they are gone. But against all accusations which may or can be preferred against me, I appeal to Heaven for my motive in writing — who knows that my object is, if possible, to awaken in the breasts of my afflicted, degraded and slumbering brethren, a spirit of inquiry and investigation respecting our miseries and wretchedness in this Republican Land of Liberty! ! ! ! !

From the Preamble to David Walker's Appeal in Four Articles, together with a Preamble, to the Coloured Citizens of the World, ed. by Charles M. Wiltse (1829; reprint Hill and Wang, 1965.)

On this day in 1830, David Walker, a prominent and outspoken black man, was found dead in his Boston home. The year before he had written David Walker's Appeal To the Coloured Citizens of the World, among the most powerful anti-slavery works ever written. Walker denounced the American institution of slavery as the most oppressive in world history and called on people of African descent to resist slavery and racism by any means. The book terrified southern slave owners, who immediately labeled it seditious. A price was placed on Walker's head: $10,000 if he were brought in alive, $1,000 if dead. Walker's writing would influence virtually every black leader who followed, including W.E.B. DuBois, Martin Luther King, Jr., and Malcolm X.

Legislatures made it a crime to circulate "seditious" literature such as Walker's Appeal. 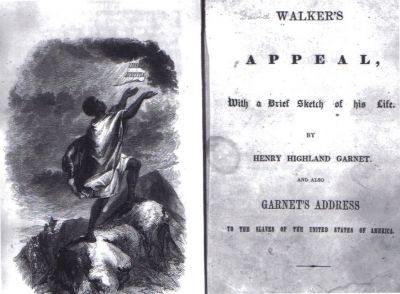 "We (coloured people of these United States of America) are the most wretched, degraded and abject set of beings that ever lived . . . ." Thus David Walker began the first of four essays that comprise his Appeal, a fiery condemnation of slavery and racism.

But David Walker proclaimed his pride in being black. "Whites," he wrote, "think because they hold us in their infernal chains of slavery, that we wish to be white . . . but they are dreadfully deceived — we wish to be just as it pleased our Creator to have made us." The book's full title was David Walker's Appeal, In Four Articles; Together With A Preamble, to the Coloured Citizens of the World, but In Particular, and Very Expressly, to Those of the United States of America. It urged black people to create independent organizations as a means of controlling their own futures and improving their own lives.

Walker urged African Americans to educate themselves; he called for unity, not only between enslaved and free black men and women in the U.S. but among people of African descent around the world. Black leaders in the twentieth century would reaffirm this connection to the African diaspora.

There is almost no documentation of David Walker's early life — not even the year of his birth. All we know is that he was born some time between 1785 and 1797 in Wilmington, North Carolina. His mother was a free black woman; his father was enslaved. Since the law stipulated that a child's status followed that of his or her mother, David Walker was born free. Growing up in the Deep South, he observed firsthand the evils of slavery.

"Whites," he wrote, "think because they hold us in their infernal chains of slavery, that we wish to be white . . . but they are dreadfully deceived — we wish to be just as it pleased our Creator to have made us."

Sometime between 1815 and 1820 he moved to Charleston, South Carolina, which had a vibrant free black population. There he seems to have become involved in the African Methodist Episcopal Church. The Appeal makes clear the depth of his Christian faith and thorough knowledge of the Bible.

It's likely, but by no means certain, that in Charleston, Walker encountered Denmark Vesey, leader of a failed slave uprising. It is inconceivable that he did not know what unfolded in 1822. An estimated 9,000 men and women had prepared to take part in the revolt, but a fellow slave betrayed them. Vesey and 35 other black men were hanged.

Not long afterward Walker left the South. "If I remain in this bloody land, I will not live long.. . . This is not the place for me, " he concluded. "I must leave this part of the country."

Walker moved to Boston; in 1825 his name appears in the City Directory as owner of a used clothing store. He quickly became active in the black community centered at the back of Beacon Hill. In March 1827, he began writing for and selling subscriptions to Freedom's Journal, the first national newspaper in the country published by blacks. The following year, he was a founding member of the Massachusetts General Colored Association, committed to promoting the interests and rights of African Americans throughout the United States.

He asked Americans to compare their own language in the Declaration "with your cruelties and murders inflicted by your cruel and unmerciful fathers and yourselves on our fathers and on us."

How and when Walker became not only literate but so well educated remains another open question. The Appeal refers to long periods of study: "I have been for years troubling the pages of historians, to find out what our fathers have done to the white Christians of America, to merit such . . . punishment as they have inflicted on them."

His book, which includes many historical references, demonstrates the depth of his knowledge. Walker had read Jefferson's Notes on the State of Virginia and eloquently disputed the former president's claims of black inferiority. He attacked head on the contradictions between revolutionary rhetoric and the Declaration of Independence. He asked Americans to compare their own language in the Declaration "with your cruelties and murders inflicted by your cruel and unmerciful fathers and yourselves on our fathers and on us." Were the colonists' "sufferings under Great Britain one hundredth part as cruel and tyrannical" as what slaves endured?

The Appeal got wide distribution, not only among free black men and women but among his target audience — the enslaved. Groups gathered secretly to listen to one of the few literate slaves read Walker's words out loud. Black sailors carried copies of the small book with them when their ships traveled to southern ports. Sometimes Walker sewed the small book into the clothes he sold.

"Remember, to let the aim of your labours among your brethren, and particularly the youths, be the dissemination of education and religion."

His success at getting the book into the hands of African Americans in the South alarmed slaveholders. The Appeal was labeled "incendiary" and "subversive." It "produced more commotion amongst slaveholders than any volume of its size that was ever issued from an American press," wrote Walker's biographer Henry Highland Garnet. And no wonder. Walker exhorted blacks to "kill or be killed." He warned white Americans that "unless you speedily alter your course, you and your Country are gone!!!!!!"

The circumstances surrounding David Walker's death remain a mystery. Many at the time were convinced he was poisoned. Some believe it still. Recent scholarship strongly suggests that he died of tuberculosis.

His militant call to action for the liberation and betterment of black people had a significant impact on the course of U.S. history and continues to resonate today: "There is great work for you to do . . . You have to prove to the Americans and the world that we are MEN, and not brutes, as we have been represented, and by millions treated. Remember, to let the aim of your labours among your brethren, and particularly the youths, be the dissemination of education and religion."

To Awaken My Afflicted Brethren: David Walker and the Problem of Antebellum Slave Resistance, by Peter P. Hinks (The Pennsylvania State University Press, 1997).

David Walker's Appeal, In Four Articles; Together With A Preamble, to the Coloured Citizens of the World, but In Particular, and Very Expressly, to Those of the United States of America, with an introduction by James Turner (reprinted by Black Classic Press, 1993).

"David Walker," in Africana: The Encyclopedia of the African and African American Experience (Basic Books, 1999).

On this day in 1946, 20-year-old Malcolm Little entered the state prison in Charlestown to begin serving a sentence for burglary. While in jail, he joined the Black Muslims, a new branch of Islam. Burning...