THE MOST TERRIBLE DISASTER KNOWN IN HAMPSHIRE COUNTY

One of the most appalling disasters that ever inflicted any community visited the villages of Williamsburg, Haydenville and Leeds, last Saturday afternoon. At about 7 o'clock that morning, the dam at the "Williamsburg Reservoir" gave way, letting an immense body of water down upon the above-named villages, sweeping away dams, bridges, houses, factories, trees, and every living thing in its course….

…The extent of the disaster is such that the mind can hardly comprehend it. Such a frightful loss of life. Such a tremendous devastation of property. So sudden – so complete – so overwhelming – one cannot grasp it. With scarcely a moment's warning – in some cases with no warning at all – almost within a twinkling of an eye, all this deluge of woe, and sorrow, and destruction, was precipitated on these communities…

…The news of the disaster spread over the surrounding country like wildfire, creating the greatest excitement. Before noon, Saturday, though it was raining hard, people began to arrive. Every available team was put in requisition. Teams could pass only as far up as the Williamsburg depot, and only from Haydenville with great difficulty, on account of the almost complete destruction of the roads and adjoining fields.

On Sunday, the weather being pleasant, people came in by thousands. From all the adjoining territory for forty miles around there came one continuous stream of people. Lumber wagons, buggies, carriages, express wagons, everything in the shape of conveyance, were brought out, and a multitude which could not be numbered nor correctly estimated, crowded the entire route of the disaster. Springfield, Holyoke and other distant places sent up hundreds and thousands of people. …probably thirty thousand people visited the town of Williamsburg on Sunday.

On this day in 1874, on the Mill River in western Massachusetts, an earthenwork dam gave way. A wall of water between 20- and 40-feet high and 300-feet wide rushed downstream. The flood destroyed almost everything in its path. Factories were crushed and houses swept off their foundations; cows, horses, and people were sucked into the roiling water. Within an hour, the flood leveled four villages. Finally, it reached a broad plain just north of Northampton. There, the river spread out over acres of freshly ploughed fields, depositing its awful contents — machinery, furniture, bridges, rocks, trees, livestock, and bodies — in a layer ten-feet deep. It took days to recover the bodies of the 139 people who lost their lives to the Mill River flood.

By the Civil War, six mill villages were thriving along the river's 15-mile path from Williamsburg to Northampton.

With its rocky ground and steep hillsides, the Mill River Valley northwest of Northampton was a hard place to farm. But in the early nineteenth century, just as farmers were beginning to wonder if there was any future for them in the valley, things changed. The topography that was a constant challenge to the plow became the area's greatest asset.

Collecting water from mountain streams as it fell more than 400 feet, the fast-flowing Mill River had enough power to turn water wheels and turbines. By the Civil War, six mill villages were thriving along the river's 15-mile path from Williamsburg to Northampton. Factories turned out woolen, cotton, and silk cloth, buttons and sewing machines, hoes, rakes, and guns, paper, brass, and iron products. The villages supported a community of factory workers and the local businesses that supplied their needs.

The mill owners were men of enterprise and acumen. Most were local men who had worked in the small mills that first appeared along the river in the 1830s. Gathering as much capital as they could, they put their technical skills and their confidence in the future of technology to work.

As they succeeded in business, the owners invested their wealth close to home, building attractive housing for their workers, banks, schools, churches, and other civic buildings. They generously supported local charities and led reform efforts and improvement societies. Village residents were grateful for the mill owners' philanthropy, civic leadership, and, above all, for the prosperity that their enterprises had brought to the area.

Horrified by the cost of the proposals they received, they decided that they would economize by designing the dam themselves. 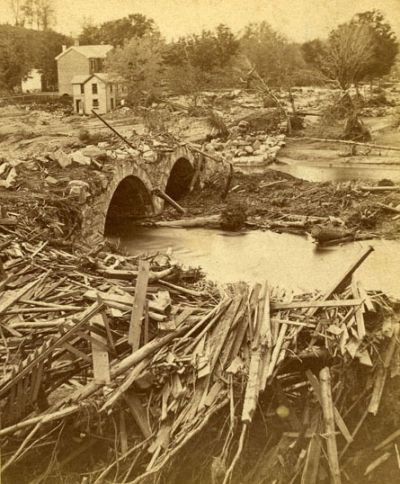 The Mill River had one major shortcoming as a source of industrial power: the water level, and with it the available energy, varied drastically with the seasons and the weather. In the early 1860s, manufacturers began to discuss building a reservoir upstream to harness seasonal run-off and control the flow of water. In 1864 they chose a location for a new dam just north of Williamsburg on a site where two hills sloped down to the river. The dam would stem the flow of the river and create a reservoir capable of holding 600,000,000 gallons of spring run-off, which could be released gradually during the dry summer months.

With a charter from the legislature, the "Williamsburg Reservoir Company" began soliciting designs from engineers. Civil engineering was still a new field; most of the men who called themselves engineers had learned on-the-job. The mill owners had experience building and operating the small dams that controlled the flow of water from millponds into factories. Horrified by the cost of the proposals they received, they decided that they would economize by designing the dam themselves.

Unfortunately, they had no understanding of the structure that was needed to contain the many tons of water that would build up behind the large reservoir dam. Cost-cutting measures both in the design and later the building compromised the strength of the dam. The surveyor who drew up the specifications and the builders who oversaw the construction all voiced doubts about the safety of the dam. The first time the reservoir was filled in the spring of 1866, worrisome leaks appeared. But after three or four years of uneventful use, the dam seemed to be holding, and valley residents began to relax.

"[It] made an awful noise," she added, "like an earthquake."

On a rainy day in the late spring of 1874, the earthenwork dam suddenly gave way. First a huge section of the east bank, saturated with water from leaks and rain, slid away and shot downstream. Realizing that the dam was about to collapse, the gatekeeper mounted his horse and rushed down the valley to warn the residents of Williamsburg. Twenty minutes later the gatekeeper's wife watched incredulously from their cabin as the dam exploded upward. She later said it "seemed to burst all at once, from the bottom, where the earth seemed to be lifted up. [It] made an awful noise," she added, "like an earthquake."

Four riders galloped down the valley as fast as they could to warn those living and working in the path of the oncoming water. Some residents fled to higher ground, some refused to believe the awful news, but most — still at home in the early morning — never heard the warning.

Six hundred million gallons of water rushed downstream in a deadly torrent; it carried sediment from the bottom of the reservoir and picked up earth, trees, and rocks along the way. A man who watched the flood approach later recalled the terrifying sight: "A great mass of brush, trees, and trash was rolling rapidly toward me. I have tried many times to describe how this appeared; perhaps the best simile is that of hay rolling over and over as a hay rake moves along the field, only this roll seemed 20-feet high, and the spears of grass in the hayrake enlarged to limbs and trunks of trees mixed with boards and timbers; at this time I saw no water."

When word of the disaster reached the outside world, offers of help poured in. At first, the Yankees of the Mill Valley insisted they could go it alone. But as the magnitude of the destruction became apparent, they welcomed help searching for bodies and providing survivors with food, clothing, and building materials.

. . . the Boston Globe labeled the flood "not an accident but a crime," no criminal charges were brought or civil suits filed; nor was a dime paid in compensation.

The losses were so great that the mill towns eventually petitioned for assistance from the legislature in Boston. There was no precedent for the state government to provide direct relief to a city or town; residents in troubled towns usually received only a temporary abatement of taxes. The legislators were hesitant to break with tradition, but they eventually granted $120,000 to rebuild bridges and roads.

A coroner's inquest was held to determine responsibility for the failure of the dam. After six weeks of testimony, the mill owners, engineers, contractors, and the county commissioners who inspected the dam were all held partly responsible for its failure. Even as the Boston Globe labeled the flood "not an accident but a crime," no criminal charges were brought or civil suits filed; nor was a dime paid in compensation.

But the disaster did lead to improvements in public safety. The Massachusetts legislature imposed standards for the construction, maintenance, and inspection of dams. Engineering of large-scale public projects had to meet state mandates. Engineers would soon become academically-trained professionals, and laissez-faire attitudes would give way to new laws regulating safety in industry.

Four-fifths of the businesses in the Mill Valley were eventually rebuilt on their original locations. The mill owners gradually regained their financial standing and their place as pillars of society. Factories powered by the rushing Mill River continued to dominate life in the valley for another quarter century, until steam, and then electricity, replaced waterpower.

The Mill River Greenway Initiative works to preserve the history Mill River Valley. They occasionally offer guided walks that include the ruins of the dam associated with the Mill River Flood.