Outwardly, Dover Street [Boston] is a noisy thoroughfare cut through a South End slum. . . . Every one of those streets is a rubbish heap of damaged humanity, and it will take a powerful broom and an ocean of soapsuds to clean it out. . . .

The City Fathers provide soap and water for the slums, in the form of excellent schools, kindergartens, and branch libraries. And there they stop: at the curbstone of the people's life. They cleanse and discipline the children's minds, but their bodies they pitch into the gutter. For there are no parks and almost no playgrounds in the Harrison Avenue district, – in my day there were none, – and such as there are have been wrenched from the city by public-spirited citizens who have no offices in City Hall. . . .

We had no particular reason for coming to Dover Street. . . . We had to live somewhere, even if we were not making a living, so we came to Dover Street, where tenements were cheap; by which I mean that rent was low. The ultimate cost of life in those tenements, in terms of human happiness, is high enough.

Our new home consisted of five small rooms up two flights of stairs, with the right of way through the dark corridors. In the "parlor" the dingy paper hung in rags and the plaster fell in chunks. One of the bedrooms was absolutely dark and air-tight. The kitchen windows looked out on a dirty court, at the back of which was the rear tenement of the estate.

On this day in 1912, over 1,000 people gathered at the Waldorf Astoria Hotel in New York to hear Boston writer Mary Antin. She had come to make a plea for more aid to support Jewish immigrant girls arriving alone in the United States. Antin had recently published The Promised Land, a memoir of her emigration from Russia to Boston's South End. She believed that the strength of her story lay in the fact that it illustrated "scores of unwritten lives." Attention from the book brought Mary Antin into social and professional circles that included Theodore Roosevelt and other prominent Americans. She became a vocal and energetic presence in public conversations about the most critical issues of the early twentieth century, including immigration, education, and Zionism.

She quickly learned English and, within six months, had advanced through five grades. 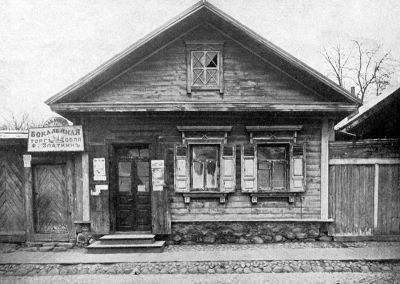 In 1913 Mary Antin received a letter from Theodore Roosevelt. The former President asked Antin's permission to include her photograph in a collection of portraits of "ideal Americans." Recognized as much for what she represented as for what she wrote, Mary Antin's identity as a successful and grateful newcomer to America infused her writing, public speaking, and political work.

Mary Antin was born into the traditional Yiddish-speaking world of "the Pale," the area of western Russia in which Jewish people were required to live. She learned early on that her religion made her different, and the difference made her, like all Jews in Polotzk, vulnerable to ridicule and abuse.

During Mary's childhood, hers was among the most prosperous families in the village. When Mary's father, Israel, traveled in search of new business, her mother ran the family store. Israel Antin returned to Polotzk determined to follow more modern ways. Anxious for his three daughters to be educated, he hired tutors for them in Hebrew and in religious and secular subjects.

Mary lived a life of relative privilege until first her father, and then her mother became ill. The family business failed, and the Antins fell into poverty. In 1891 Israel emigrated to Boston; three years later he sent for his wife and six children.

Mary Antin was born into the traditional Yiddish-speaking world of "the Pale," the area of western Russia in which Jewish people were required to live. 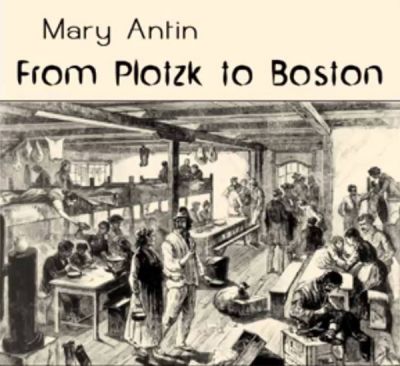 Life in Boston was almost as hard as it had been in Russia. Israel's various business projects failed, and the older children took factory jobs to help support the family. But it seemed as though the kind of life immigrants dream of might be within reach for Mary Antin.

She quickly learned English and, within six months, had advanced through five grades. With the support of her teachers and other adults, she attended Boston Latin School for Girls and the Practical Arts High School. She was just 18 when her first book, From Plotzk to Boston, a collection of letters written to her uncle in Russia, was published in 1899. A New York Times reviewer described Mary Antin as a promising young writer and predicted a bright future for her.

As wealthy, educated Bostonians, both Jewish and non-Jewish, took an interest in the talented young immigrant, her world diverged from that of her family. Despite her father's repeated business failures, and the Antins' increasingly desperate circumstances, the generosity of her benefactors allowed Mary to take music lessons, attend concerts and cultural events, and spend summers traveling.

The book provided reassurance, as one reviewer put it, that "this country of ours, with all its poverty, with its slums, with its industrial problems, and its 'armies of the unemployed,' is still the land of promise."

When Mary Antin was 19, she overcame the objections of her family and married Amadeus Grabeau, a man she had met while still in high school. Eleven years her senior and the son of a German Lutheran minister, Grabeau was a professor of geology at Columbia University. Antin (who did not change her name when she married) moved to New York. There a new circle of friends encouraged her to write an autobiography that would highlight the immigrant experience. In 1911 The Atlantic Monthly published Antin's work as a series of articles; the following year they appeared in book form as The Promised Land.

Reviewers praised The Promised Land for bringing the "ordinary" experience of immigrants to life and for giving readers access to the "mind of the Russian Jew." The book provided reassurance, as one reviewer put it, that "this country of ours, with all its poverty, with its slums, with its industrial problems, and its 'armies of the unemployed,' is still the land of promise."

Indeed, Mary Antin's book was a love letter to America. Hers was a story of the triumph of freedom and opportunity over poverty and squalor, a story she believed was "in its larger outlines, typical of many." Antin appreciated what it meant to be safe from the persecution Jews faced in Russia, and she loved America for the fact that public schools, parks, libraries, and settlement houses were open even to a girl from "the slums."

In the book of my life, she told her readers, "is written the measure of your country's growth and an answer to your doubts."

For several years after The Promised Land was published, Antin immersed herself in some of the most important political questions and causes of the day. A well-known figure, she lectured all over the country in favor of liberal immigration policies. In the book of my life, she told her readers, "is written the measure of your country's growth and an answer to your doubts." She actively lobbied for more aid to support young Jewish women arriving alone in America. "A girl worth letting into the country is worth looking after to see what becomes of her." At the same time, she became a champion of the Zionist movement that advocated for a Jewish homeland.

The United States involvement in World War I brought about a devastating change in Antin's life. When her husband persisted in his long-time admiration for German science, he lost his job at Columbia. In 1919 he moved to China, where he remained for the rest of his life.

The marriage ended, and Mary Antin began to suffer from mental illness. She disappeared into relative obscurity, spending much of the rest of her life in and out of mental hospitals. It was not until well after her death in 1949 that her book was rediscovered and read as a poignant record of both the joyful and devastating aspects of the immigrant experience.

WGBH News: How Mary Antin Brought the Boston Immigrant Experience to the Masses