GROWING YOUNG WITH ROCK AND ROLL

It's four in the morning and raining. I'm 27 today, feeling old, listening to my records, and remembering that things were diffferent a decade ago. In 1964, I was a freshman at Brandeis University, playing guitar and banjo five hours a day, listening to records most of the rest of the time, jamming with friends during the late-night hours, working out the harmonies to Beach Boys' and Beatles' songs….

Through college, I consumed sound as if it were the staff of life. Others enjoyed drugs, school, travel, adventure. I just liked music: listening to it, playing it, talking about it. If some followed the inspiration of acid, or Zen, or dropping out, I followed the spirit of rock'n'roll.

During those often lonely years, music was my constant companion and the search for the new record was like a search for a new friend and new revelation….

… in those days, I didn't see myself as a critic -- the writing was just another extension of an all-encompassing obsession. It carried over to my love for live music, which I cared for even more than the records. I went to the Club 47 three times a week and then hunted down the rock shows…

For every moment I remember there are a dozen I've forgotten, but I feel like they are with me on a night like this, a permanent part of my consciousness, a feeling lost on my mind but never on my soul….

Today I listen to music with a certain measure of detachment. I'm a professional and I make my living commenting on it….

But tonight there is someone I can write of the way I used to write, without reservations of any kind. Last Thursday, at the Harvard Square theatre, I saw my rock'n'roll past flash before my eyes. And I saw something else: I saw rock and roll future and its name is Bruce Springsteen. And on a night when I needed to feel young, he made me feel like I was hearing music for the very first time.

When his two-hour set ended I could only think, can anyone really be this good; can anyone say this much to me, can rock'n'roll still speak with this kind of power and glory? And then I felt the sores on my thighs where I had been pounding my hands in time for the entire concert and knew that the answer was yes.

… Bruce Springsteen is a wonder to look at. Skinny, dressed like a reject from Sha Na Na, he parades in front of his all-star rhythm band like a cross between Chuck Berry, early Bob Dylan, and Marlon Brando. Every gesture, every syllable adds something to his ultimate goal — to liberate our spirit while he liberates his by baring his soul through his music. Many try, few succeed, none more than he today.

Add a space in "won20 Grammies." The "Springsteen does it all" paragraph should have quotation marks at the beginning. And while "theater" and "theatre" are both correct spellings, you probably should stick to one or the other in the same article. In this case, make it "Harvard Square Theatre" as in the article quoted under "Sources," since that's how they spell it.
Login

On this day in 1974, 25-year-old Bruce Springsteen played at the Harvard Square Theater in Cambridge. Although popular with the college crowd in the Northeast, Springsteen was not yet a star. That night, he and the E Street Band opened for Bonnie Raitt. The influential music critic Jon Landau was in the audience. Overwhelmed by what he heard, Landau wrote, "I saw my rock and roll past flash before my eyes. I saw something else: I saw rock and roll's future and its name is Bruce Springsteen." In the years since that momentous spring night in Cambridge, "the Boss" has had 14 albums go platinum, has won 20 Grammies and an Oscar, and has been inducted into the Rock and Roll Hall of Fame. 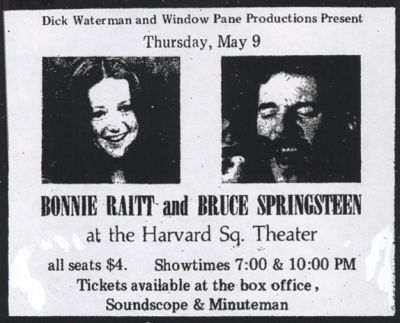 In May of 1974, Bruce Springsteen was still just one of hundreds of young rock musicians hoping to make it big. His early work, and particularly his performances on college campuses, had earned him a small but devoted following. His hard-driving manager, Mike Appel, had helped him get a record contract with Columbia. But most reviewers were at best lukewarm, and Columbia executives were becoming impatient. The record company had already lost $150,000 on Springsteen's albums; there seemed little prospect that the young singer would ever become a star.

When Springsteen performed at the Harvard Square Theater in Cambridge that spring, his life — and the future of rock and roll — changed forever. Springsteen's albums were uneven, but his live performances were sensational. Onstage, the skinny, shy kid from the New Jersey shore transformed himself into a dynamic and powerful rocker. The influential music critic Jon Landau was in the audience on May 9th, and he was captivated by Springsteen. A regular writer for Rolling Stone and the Real Paper, Landau could make or break a career. In the next issue of the Real Paper, he made Bruce Springsteen a star.

"On a night when I needed to feel young, he made me feel like I was hearing music for the very first time."

"Tonight," his column began, "there is someone I can write of the way I used to write, without reservations of any kind. Of Springsteen's recent concert in Harvard Square, he wrote: "On a night when I needed to feel young, he made me feel like I was hearing music for the very first time. When his two hour set ended I could only think, can anyone really be this good, can anyone say this much to me, can rock and roll speak with this kind of power and glory? And then I felt the sores on my thighs where I had been pounding my hands in time for the entire concert and knew that the answer was Yes.

Springsteen does it all. He is a rock'n'roll punk, a Latin street poet, a ballet dancer, an actor, a joker, bar band leader, rhythm guitar player, extraordinary singer, and a truly great rock'n'roll composer. He leads a band like he has been doing it forever. I racked my brains but simply can't think of a white artist who does so many things so superbly. There is no one I would rather watch on a stage today."

"I have seen rock and roll's future and its name is Bruce Springsteen . . ." 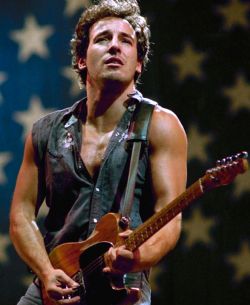 Columbia was quick to take advantage of Landau's enthusiasm. Rolling Stone and other papers were soon trumpeting Landau's endorsement: "I have seen rock and roll's future and its name is Bruce Springsteen," declared full-page ads. But the Real Paper review had even more far-reaching consequences. It marked the beginning of a relationship between Springsteen and Landau that would be key to transforming the singer into a superstar.

In October of 1974, Springsteen returned to Boston to play at the Music Hall. After the concert, he and Landau sat down for a long discussion of how Springsteen could make the leap from his amateurish first albums to serious recordings. Shortly afterward, Landau joined Springsteen's management team as co-producer with Appel. With Landau behind him, Bruce Springsteen recorded Born to Run, the first of his records to go platinum, selling over a million copies.

The Harvard Square Theater where Springsteen played this legendary concert still stands, although it was later converted into a multiplex that closed in 2012.

A collection of issues of The Real Paper is part of the Boston Phoenix collection at Northeastern University's Snell Library.

"The Harvard Square Theatre, Cambridge, Massachusetts Presents Bruce Springsteen and the E Street Band, 9th May 1974," by Jon Landau in The Real Paper, May 22, 1974.

The Mansion on the Hill: Dylan, Young, Geffen, Springsteen, and the Head-On Collision of Rock and Commerce, by Fred Goodman (Vintage Books, 1998).

On this day in 1994, Boston-based rock band Aerosmith opened the Mama Kin Music Hall. In the shadow of Fenway Park, the Lansdowne Street facility enjoyed moderate success as a live music venue before the...