On this day in 1986, Congress designated the historic Blackstone River Valley a National Heritage Corridor. Running from Worcester to Providence, the Blackstone Valley lays claim to being the birthplace of the industrial revolution in America. It was here that the nation's first mechanized textile mill opened in 1790. Over the next 150 years, countless factories tapped the abundant water power available along the Blackstone's 46 miles. After years of economic and environmental exploitation, local citizens began working to clean up and restore the river's scenic and historic resources. Their efforts culminated in the creation of the John H. Chafee Blackstone River Valley National Heritage Corridor, which now encompasses 25 communities in Massachusetts and Rhode Island.

In 1847 the Providence & Worcester Railroad opened, and within a year, the canal was abandoned. 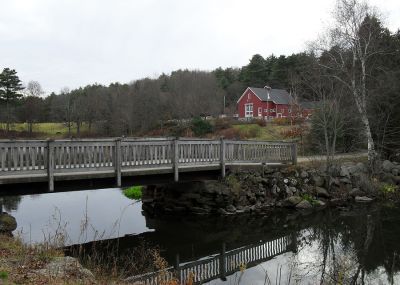 When the Lady Carrington arrived in Worcester via the newly opened Blackstone Canal at 11:00 am. on October 7, 1828, cannons boomed, church bells pealed, and crowds cheered in expectation of new economic opportunities.

The opening of the long-awaited waterway linking Worcester and Providence promised to be a key moment in the development of the Blackstone River Valley. Beginning with the first commercially successful, fully mechanized cotton-spinning mill that Samuel Slater built in Pawtucket, Rhode Island, the valley was soon crowded with textile-factories powered by the river's 438-foot fall.

Shortly after Slater's mill opened, Providence merchant John Brown proposed building a canal that would connect his seaport city with farms and villages in central Massachusetts. Financed by Brown and other Rhode Island merchants, construction of the Blackstone Canal began in the mid-1820s. Completed eight years later, the canal passed through 49 locks en route from Worcester to Providence. The canal opened up Worcester as an inland port and increased the population more than fivefold between 1820 and 1850.

The Blackstone Canal passed through 49 locks en route from Worcester to Providence. The canal opened up Worcester as an inland port and increased the population more than fivefold between 1820 and 1850.

The Blackstone Canal never fulfilled its early promise. The shallow man-made canal froze in the winter. In dry summers, low water left boats stranded for days or even weeks at a time. While it transported goods quickly and cheaply, within two decades it gave way to an even quicker and cheaper means of transportation. The Boston & Worcester Railroad began operating in 1835; other rail lines followed, integrating once-isolated Worcester into a sprawling network of trade and commerce. In 1847 the Providence & Worcester Railroad opened, and within a year, the canal was abandoned. Although it was never profitable, the Blackstone Canal did help to spread the influence and benefits of the industrial revolution.

By the late 1800s, the Blackstone Valley's many mills were turning out large volumes of cotton thread, wool and cotton cloth, and textile machinery; other companies specialized in the dying of textiles. The valley was also home to rubber, hat, and wire manufacturing. The river powered the factories and served as the repository for the waste they and the valley's growing population produced.

Immigrants from Central America and Southeast Asia are still arriving in the Blackstone Valley today, hoping to find work in the few remaining mills.

The rapidly expanding industries located throughout the Blackstone Valley needed workers. Irish immigrants provided the primary labor to dig the canal; many of them remained to work in the mills or on the railroads. In the 1860s and 1870s, Blackstone Valley mill owners began to recruit French Canadians, whose poverty made them eager for employment. Poles, Swedes, and Portuguese followed. Immigrants from Central America and Southeast Asia are still arriving in the Blackstone Valley today, hoping to find work in the few remaining mills.

The valley's prosperity came to the end in the early 1900s with the decline of the textile industry. Between 1920 and 1980, most of the valley's cotton mills closed and 90% of the woolen and worsted mills shut down. As the textile industry relocated to the South, the area lost jobs and population. New England's many other mill towns have experienced similar fates.

Years of intense industrial usage had created a lasting toxic legacy. Chemical dyes from textile factories; heavy metals from leather and metalworking plants; and varnish, solvents, and paints used by woodworking operations had all been discharged into the river. By the early 1900s, the upper Blackstone River was severely polluted. Even as late as 1971, Audubon magazine listed the Blackstone River as one of America's most polluted rivers. More than a century after these chemicals were first deposited, many of them are still found in the river's sediments, where they continue to affect the water quality and overall health of the Blackstone ecosystem.

An initial inventory identified over 10,000 sites of historical, scenic, and ecological importance.

Under the leadership of the late Rhode Island Senator John Chafee, in 1986 the federal government committed funds to help Massachusetts and Rhode Island clean up the Blackstone River and recognize the valley as a "special place of historic and cultural significance." An initial inventory identified over 10,000 sites of historical, scenic, and ecological importance. Since 1986 the Blackstone River, once colored with dyes and polluted with industrial wastes, has become safe for kayaking and canoeing. It is nearing the goal of being officially "fishable and swimmable," and a new bikeway along the riverbank will soon link Worcester and Providence.

In 2014, President Obama signed legislation that established the Blackstone River Valley National Historical Park, extended the authorization for the John H. Chafee Blackstone River Valley National Heritage Corridor, and added the town of Auburn, Massachusetts, to the corridor's boundaries. Visitors to the heritage corridor not only learn about the area's rich industrial history but also enjoy recreational activities made possible by the region's abundant natural resources.

Blackstone River Heritage and Canal State Park has its headquarters at River Bend Farm in Uxbridge.

The headquarters of the Blackstone River Valley National Heritage Corridor is in Whitinsville,MA.