As other towns report their first experience of women at the polls, Concord should be heard from, especially as she has distinguished herself by an unusually well conducted and successful town meeting.

Twenty-eight women intended to vote, but owing to the omission of some formality several names could not be put upon the lists. Three or four were detained at home by family cares and did not neglect their domestic duties to rush to the polls as has been predicted. Twenty, however, were there, some few coming alone, but mostly with husbands, fathers or brothers as they should, all in good spirits and not in the least daunted by the awful deed about to be done.

Our town meetings I am told are always orderly and decent, this one certainly was; and we found it very like a lyceum lecture only rather more tedious than most, except when gentlemen disagreed and enlivened the scene with occasional lapses into bad temper or manners, which amused but did not dismay the women-folk, while it initiated them into the forms and courtesies of parliamentary debate.

Voting for school committee did not come till about three, and as the meeting began at one, we had ample time to learn how the mystic rite was performed, so, when at last our tickets were passed to us we were quite prepared to follow our leader without fear.

Mr. Alcott with a fatherly desire to make the new step as easy as possible for us, privately asked the moderator when the women were to vote, and on being told that they could take their chance with the men or come later, proposed that they should come first as a proper token of respect and for the credit of the town…

The moderator (who is also the registrar and has most kindly and faithfully done his duty to the women in spite of his own difference of opinion) then announced that the ladies would prepare their votes and deposit them before the men did. No one objected, we were ready, and filed out in good order, dropping our votes and passing back to our seats as quickly and quietly as possible, while the assembled gentlemen watched us in solemn silence.

No bolt fell on our audacious heads, no earthquake shook the town, but a pleasing surprise created a general outbreak of laughter and applause, for, scarcely were we seated when Judge Hoar rose and proposed that the polls be closed. The motion was carried before the laugh subsided, and the polls were closed without a man's voting; a perfectly fair proceeding we thought since we were allowed no voice on any other question.

The superintendent of schools expressed a hope that the whole town would vote, but was gracefully informed that it made no difference as the women had all voted as the men would.

Not quite a correct statement by the way, as many men would probably have voted for other candidates, as tickets were prepared and some persons looked disturbed at being deprived of their rights….

The business of the meeting went on, and the women remained to hear the discussion of ways and means, and see officers elected with neatness and dispatch by the few who appeared to run the town pretty much as they pleased….

Quoted in The Selected Letters of Louisa May Alcott, ed. by Joel Myerson and Daniel Sheal (Little, Brown and Company, 1987).

On this day in 1880, Louisa May Alcott and 19 other women attended the Concord Town Meeting. The year before, the Massachusetts legislature had made it legal for women to vote in school committee elections. A strong supporter of woman suffrage, the author of Little Women was the first woman in Concord to register to vote. She rallied other women to exercise the limited franchise they had been given. When the day came, a group of 20 women, "mostly with husbands, fathers or brothers" appeared, "all in good spirits and not in the least daunted by the awful deed about to be done." When the votes were cast, she later reported, "No bolt fell on our audacious heads, no earthquake shook the town."

In 1883 only seven women cast their votes for the school committee. 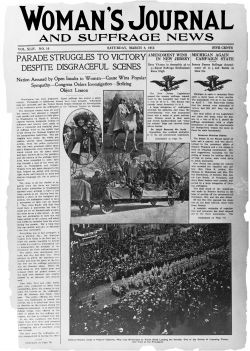 The Alcotts of Concord were dreamers and doers, too. Instead of just preaching or writing about abolition, education, health care, dress reform, and diet, the Alcotts sheltered fugitive slaves, opened experimental schools, bathed in cold water, wore linen bloomers, and — at least when Mr. Alcott was at home — ate a Spartan diet of whole grain bread, vegetables, fruit, and water.

Early nineteenth century Massachusetts was a crucible of reform movements. The Alcott family was involved in almost every one of them. As an adult, Louisa May sometimes signed her letters, "Yours for reforms of all kinds." Towards the end of her life, however, she turned her attention and energy to the issue her father called "the reform of reforms," and her mother called essential to "the welfare and progress of the state." Louisa joined the fight for woman suffrage.

Louisa's mother, Abigail May Alcott, had been an early champion of woman's rights in marriage and in the workforce. Abby Alcott was one of the first paid social workers in the city of Boston. One of Louisa's early novels, entitled Work, follows the trials of a young woman not unlike her mother who must find a way to support herself.

In 1853 Abby Alcott authored a petition seeking a change in the state constitution to grant equal political rights to women. "On every principle of natural justice, as well as by the nature of our institution, she is as fully entitled as man to vote, and to be eligible to office," she wrote. Abigail Alcott was always ahead of her time. In the 1870s she declared, "I am seventy-three, but I mean to go to the polls before I die, even if my daughters have to carry me."

As an adult, Louisa May sometimes signed her letters, "Yours for reforms of all kinds."

Mrs. Alcott's daughters did not have the chance to carry their mother to the polls, but they did carry on her dream. Although Louisa May Alcott was usually too busy earning a living to attend woman's rights conventions, she lent her support by writing pieces for the events and articles for The Woman's Journal, the leading suffrage paper.

When she looked about her in Concord, she feared that her hometown was "degenerating into a museum of revolutionary relics . . . " Concordians seemed to be "content with the reflected glory of dead forefathers and imported geniuses," she complained in 1880.

She was dismayed when organizers excluded women from the parade and presentation planned to celebrate the centennial celebration of the Battle of Concord. "As I looked about me," she wrote in The Woman's Journal, "it was impossible to help thinking that there should have been a place for the great granddaughters of Prescott, William Emerson, John Hancock and Dr. Ripley, as well as for . . . the scissors that cut the immortal cartridges, and the ancient flag some woman's fingers made. It seemed to me that . . . the men of Concord had missed a grand opportunity of imitating those whose memory they had met to honor."

Concordians seemed to be "content with the reflected glory of dead forefathers and imported geniuses," she complained in 1880.

The men who sat in the Massachusetts legislature were not much more supportive of woman's rights than the men of Concord, but they believed that women, as mothers, had a special interest in and understanding of educational matters. In 1879 the legislature passed a bill to give Massachusetts women the right to vote in school committee elections.

Louisa May Alcott took the opportunity seriously. She went door-to-door urging women to register and then held meetings at her house to teach new registrants how to cast a ballot.

On March 29, 1880, 20 women appeared at the Concord Town Meeting, previously an all-male domain. After two hours of other business was conducted, the meeting turned to the school committee vote. Louisa May's father, Bronson Alcott, requested that the women be allowed to vote first. All 20 rose and filed to the front of the room. According to one local paper, "many a feminine heart [palpitated] with excitement . . . in preparation for the trying ordeal of passing in front of . . . nearly 200 great horned men & boys to deposit their maiden vote."

. . . when the superintendent of schools objected, he was "gracefully informed that it made no difference as the women had all voted as the men would."

As soon as the women had cast their ballots, a motion was made and with a quick second, the voting closed. Women alone had elected the school committee. Most of the men seemed to find the whole thing amusing, but when the superintendent of schools objected, he was "gracefully informed that it made no difference as the women had all voted as the men would." With a trace of bitterness, Louisa reported in the Woman's Journal, that it was "a perfectly fair proceeding . . . since we were allowed no voice on any other question."

She was disappointed that more women did not turn out for this first election; she hoped "next year our ranks will be fuller." But she never had much success in motivating the women of Concord to vote; in 1883 only seven women cast their votes for the school committee.

Louisa Alcott herself had little time for suffrage work. In the early 1880s, at the age of 48, she became guardian of an orphaned niece. Childcare responsibilities kept her from attending woman suffrage conventions. She continued to put her pen to the service of the cause. "I should be a traitor to all I most love, honor and desire to imitate if I did not covet a place among those who are giving their lives to the emancipation of the white slaves of America." Louisa May Alcott died in 1888. American women would not be fully enfranchised until 1920.

Orchard House in Concord was the Alcott family's most permanent home (1858-1877) and the place where Louisa May wrote Little Women.

Louisa May Alcott is buried on Authors Ridge at Concord's Sleepy Hollow Cemetery.

Louisa May Alcott, by Madeleine B. Stern (University of Oklahoma Press, 1950).