Ati Gropius Johansen remembers the day Igor and Vera Stravinsky came to visit at her parents' house in Lincoln:

One Sunday in May of 1940, Stravinsky and his gorgeous wife Vera came for lunch at my parents' house. My father was delighted to see his old friend again whom he had known since 1922 in the Bauhaus days. A commonness of spirit pulled these adventurers of the modern movement together. They admired each others' work whether in music or architecture. Stravinsky's "L'histoire du Soldat" had always been a favorite in my father's record collection. Its clarity, spareness, inventive use of instrumental sound, humor, and unsentmentality all appealed to him greatly. Whether they spoke in English, French, or German, these two men spoke a common tongue.

On this day in 1940, the German-born architect Walter Gropius and his wife Ise opened their new home in Lincoln to some old friends — the great composer Igor Stravinsky and his wife Vera. Gropius had designed the house according to the principles of the Bauhaus, the European school of architecture that he founded in 1919. Modest but graceful, the house integrated modern industrial materials with elements of traditional New England buildings. But the house was more than an architectural attraction — it was a warm home. In the words of daughter Ati Gropius, there was "a never-ending parade of visitors, far-away friends, strangers and students marching through the house at all hours of the day."

All building materials and fixtures were industrial grade to save money and extend their life. 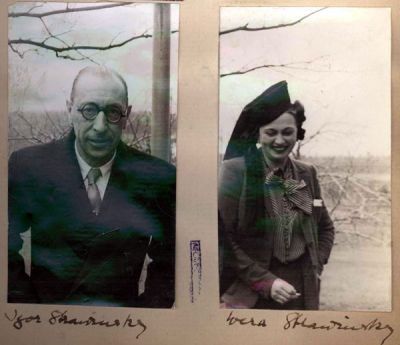 Even today, the rolling countryside west of Boston, minutes from Walden Pond, seems like an odd place to find an icon of Bauhaus architecture. How did it happen?

Walter Gropius, founder of the Bauhaus, was 54 years old when he immigrated to America. Many people considered him to be the most important architect in modern Europe. His genius was in integrating industry, craftsmanship, and art.

He saw that the future lay in industrial workplaces and the products mass-produced there, and his work connected the world of machines with the traditions of craftsmanship and art. He stressed functionality and simplicity, utilized mass-produced fittings of steel, chrome, and glass in the factories and office buildings he designed. He believed it was not only efficient and sensible to use mass-produced materials; it also created egalitarian spaces where people of all economic and social classes mixed.

In 1919 Gropius founded a new school of architectural design in Weimar, Germany, which he called the Bauhaus. (Translated literally, the term means "the House of Building.") Recognizing how much mass production had eroded the tradition of craftsmanship during the nineteenth century, Gropius and his fellow Bauhaus architects brought together artists, craftsmen, and technicians to create spaces and objects for daily use.

She would give Gropius a piece of her large estate in Lincoln, money to build a home there, and a chance to design an American showcase for the Bauhaus right in her own backyard. 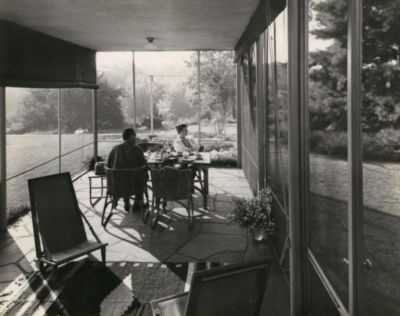 The guiding principle of a Bauhaus education was collaboration between disciplines. Students learned to work with scientists as well as artists, and to integrate psychology, biology, and environmentalism with the architectural qualities of proportion, scale, light, rhythm, and color. For more than a decade, the Bauhaus was a center of creative energy in Europe.

When the Nazis came to power in 1932, they labeled the Bauhaus "Communist" and closed the school down. Five years later, Harvard invited Gropius to head up its Graduate School of Design. In the spring of 1937, Gropius and his wife Ise arrived in Massachusetts. Their 12-year-old daughter Ati followed a few months later. Walter and Ise Gropius immediately fell in love with the New England landscape. As much as they longed to build a home according to Bauhaus design principles, there was no way they could afford it.

Henry Shipley, an architect friend and admirer of Gropius's work, approached the wealthy Boston philanthropist Helen Storrow with an unusual proposal: She would give Gropius a piece of her large estate in Lincoln, money to build a home there, and a chance to design an American showcase for the Bauhaus right in her own backyard. She readily agreed, and Gropius immediately set to work.

"I made it a point," he said, to fuse "the regional spirit with a contemporary approach to design [to produce] a house that I would never have built in Europe . . ."

In keeping with Bauhaus principles, Gropius wanted his home to reflect its natural surroundings; he combined elements of traditional New England architecture, such as clapboards and fieldstone, with modern industrial materials, such as glass blocks, chrome banisters, and acoustical plaster, rarely used in domestic settings. He chose a site on a rise overlooking fields and an orchard to knit the house into the fabric of the landscape.

When people used the "International Style" label for the house, Walter Gropius insisted his new home was distinctly New England: "I made it a point," he said, to fuse "the regional spirit with a contemporary approach to design [to produce] a house that I would never have built in Europe with its entirely different climatic, technical, and psychological background."

Gropius designed the house for maximum efficiency, simplicity, and economy. All building materials and fixtures were industrial grade to save money and extend their life. The design pioneered the use of natural ventilation and solar heating. White clapboards, applied vertically, were used as interior wall surfaces. Ise Gropius, who collaborated with her husband on the design, liked the way "their narrow vertical shadows relieve the white blandness and make an excellent background for artwork."

"The members of the Modern Movement were in close contact with each other in those years and formed a community of kindred spirits."

The family moved into the house in September 1938, as it happened the same week a catastrophic hurricane struck New England. People had begun coming to see the house even before it was finished, and once the family moved in, there was a steady stream of visitors. Many came simply to experience this American expression of the Modern Movement. Others, like Igor and Vera Stravinsky, were old friends of Walter and Ise — artists, architects, musicians, and scholars who shared a deep bond with the couple, including roots in a Europe now gone mad.

On the walls of the Gropius house hang abstract paintings and drawings, gifts from the artists Henry Moore, Josef Albers, and Joan Miro, who were among their many friends. The couple's "inner circle" also included architects, writers, and musicians. Ati Gropius remembered that "the members of the Modern Movement were in close contact with each other in those years and formed a community of kindred spirits." The Gropius house became their gathering place.

Walter Gropius lived in the house from 1938 until his death in 1969. Fifteen years later, Ise Gropius bequeathed the house to the Society for the Preservation of New England Antiquities, now Historic New England, "to continue the tradition of teaching the principles of the Bauhaus Movement." Thousands of people from all over the world visit every year.

Gropius House in Lincoln is a property of Historic New England and is open to the public.

On this day in 1903, Isabella Stewart Gardner's newly completed home and museum was opened to the public for the first time. The grand building on the Fenway was the realization of Mrs. Gardner's dream...