Twelve families agreed yesterday to settle for a reported $8 million and to withdraw their claim that chemically-contaminated Woburn drinking water caused the leukemias that killed five children and one adult.

Lawyers for the defendant in the case, W.R. Grace & Co., insisted that the settlement vindicated the firm's position in the ongoing controversy over whether chemical exposure can cause leukemia in humans.

The settlement was announced in US District Court in Boston by Judge Walter Jay Skinner, who admitted he had erred in giving instructions to the jury in a case involving claims by eight of the families and was prepared to order a new trial —a prospect that neither side apparently relished.

"I really didn't want to go through that any more," Anne Anderson, the mother of one of the victims, said during a subsequent news conference at a Woburn church. The families nevertheless asserted a victory in their campaign to "send a message to corporate America."

"They achieved what they set out to achieve … to make the companies responsible pay for what they did," said Jan Richard Schlichtmann, principal lawyer for the families.

Although the settlement laid to rest the claims that the original eight families had been pursuing since 1982, it left untouched the mystery of a larger cluster of cases of the rare blood-cell cancer called leukemia —26 in all — that has afflicted Woburn residents since 1964.

That cluster, three times larger than normal in a city the size of Woburn (population 36,000), remains under investigation by the US Centers for Disease Control and the state Department of Public Health.

…At their news conference, members of the original eight Woburn families made it clear that while they had accepted the terms of the settlement, their anger continued.

"We have lost a lot more than anybody can pay us for," said Richard Toomey, whose son, Patrick, died of leukemia in 1981, at age 11. "But we went into it partly to show people that we could fight a corporation of that size and magnitude; that people banded together can get justice," he said.

On this day in 1984, lawyer Jan Schlichtmann filed the first motion in the case made famous by the book and film "A Civil Action." For over a decade, children in Woburn had been falling ill and dying of leukemia in unusually high numbers. The victims' families became convinced that the town's polluted drinking water was to blame. It took years for them to find a lawyer, but finally Jan Schlichtmann agreed to represent them. He was out-spent and out-maneuvered by the high-powered defense attorneys hired by corporate giants W.R. Grace and Beatrice Foods. After two frustrating years of litigation, Schlictmann settled out of court. But the Environmental Protection Agency forced Grace and Beatrice to pay for the nation's most expensive toxic cleanup.

Neither W.R. Grace nor Beatrice ever admitted responsibility for the elevated rate of leukemia in Woburn. 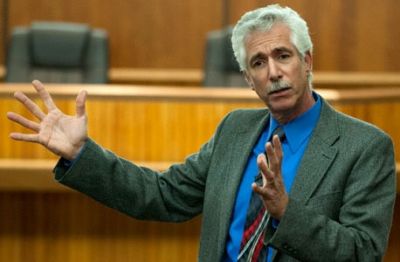 In 1973 three-and-a-half-year-old Jimmy Anderson was diagnosed with leukemia. His mother Anne suspected her son's illness was caused by contaminated drinking water in their hometown of Woburn. After Jimmy and seven other children died and many others fell seriously ill, tests proved that the water in two public wells was, in fact, seriously polluted with toxic chemicals from industrial waste. A group of families hired personal injury lawyer Jan Schlictmann to find the responsible parties and bring them to justice. It was the beginning of a landmark trial; it was also the beginning of a new era of concern and accountability about the effects of toxic waste.

The safety of Woburn's drinking water had long been a contentious issue. The town, 12 miles northwest of Boston, had been home to industry for over 150 years. Tanneries used toxic compounds to cure leather, and other factories sent what one reporter called "a toxic brew" down the local Aberjona River.

In the 1950s, when rapid development caused a chronic shortage of drinking water, town officials began to consider drilling public wells. But a 1958 engineering study concluded that that the ground water was so polluted that well water would not be safe to drink. Despite that warning, in the early 1960s the town went ahead and drilled two new wells — identified as Wells G and H — on the east bank of the Aberjona. The wells were used during periods of peak demand even after residents on the east side of Woburn complained that the water smelled and tasted bad, and that it corroded pipes.

Tanneries used toxic compounds to cure leather, and other factories sent what one reporter called "a toxic brew" down the local Aberjona River. 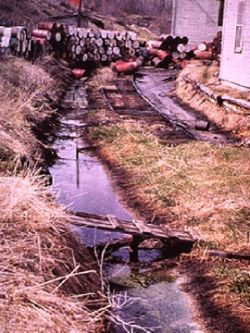 In less than a decade, children began getting sick. Anne Anderson met many of the families with sick children when she took her son to Boston for treatment. She was convinced that the cluster of leukemia cases in her neighborhood was far from a random occurrence. Doctors told her that it was very difficult to prove that environmental conditions caused cancer clusters, but Anne Anderson continued to suspect the water.

In May of 1979 a major story broke in Woburn. Several barrels of chemicals had been found dumped near the Aberjona River. When state investigators tested Wells G and H, they found that they were contaminated with TCE (tetrachloroethylene — a suspected carcinogen) and other industrial byproducts. The wells were immediately closed.

Anne Anderson sprang into action. Others, including her own husband, thought that she was obsessed with her son's illness. However, when the couple's minister agreed to counsel Anne, he became convinced she was right. He called a meeting for families who had been affected by leukemia and other cancers. A large crowd turned up; when they finished mapping the location of their homes, there were few doubters left in the room. Something was causing the residents of Woburn to develop leukemia at a rate four times higher than the national average. And the illness seemed concentrated among families that had drawn most heavily from the two polluted wells.

The city's Daily Times Chronicle publicized a state study conducted in December of 1979 that confirmed that Woburn had a "statistically significant" number of leukemia cases. Now the federal Center for Disease Control and the Environmental Protection Agency began to take notice.

Something was causing the residents of Woburn to develop leukemia at a rate four times higher than the national average.

Anne Anderson and a group of other victim's families hired a personal injury law firm to pursue a civil case against the polluters of the well. They said they did not want money; they wanted to have someone take responsibility for the pollution, apologize, and clean up the water. But law firms were reluctant to sign on. It would be difficult and costly to trace the chemicals to specific polluters, and equally difficult to prove that those chemicals had actually caused the cancers. For several years, the case lingered.

Then Jan Schlichtmann entered the scene. His partners discouraged him from taking the case and urged him to tell the plaintiff that it was hopeless. But on a visit to the site, Schlichtmann discovered two things. First, two huge corporations — W.R. Grace and Beatrice Foods — owned the property where pollution seemed to have occurred; this meant potential "deep pockets" to pay any damages that might be won. Second, he was moved by the plight of the victims' families; they had suffered so grievously that he felt compelled to help them. Schlichtmann disregarded his partners' advice; his small, under-funded firm would take the case, challenging Grace and Beatrice and the elite Boston lawyers who represented them. On May 14, 1984, he filed the first complaint in the case.

Although the trial would eventually yield a best-selling book and a movie (A Civil Action), the story would have no happy Hollywood ending. Schlichtmann's inexperience and his firm's resources were no match for the well-financed, seasoned lawyers on the defense team. Schlichtmann worked doggedly to collect the necessary depositions; he sank all of his firm's assets into a $3,500,000 "discovery" process that required expensive engineering studies and expert witnesses. By the time the case went to trial, Schlichtmann and his partners were exhausted and so deeply in debt that they had mortgaged their homes to the firm's creditors.

"the Superfund law makes property owners responsible whether or not they actually contaminated their land."

Schlichtmann had one stroke of good luck — he found an honest Grace employee who testified that he had witnessed dumping of hazardous waste and that his boss had authorized it — but the lawyer had far more bad luck. Most of the workers refused to testify; the owner and employees of one parcel consistently perjured themselves; the defense attorneys hid critical evidence of a secret clean-up of contaminated soil that would have significantly strengthened Schlichtmann's argument. Perhaps worst of all, the case was assigned to a judge who was friends with the leading defense attorney and who hated personal injury lawyers in general, Jan Schlichtmann in particular.

But Schlichtmann's poor judgment and pride were a big part of the problem. He turned down a pre-trial settlement offer of $8,000,000 from Beatrice, because he overestimated the damages he thought a jury would award the families. But the jury never got to hear from the families. The judge ruled that the jurors should first decide whether the plaintiffs had proved that the chemicals from Grace and Beatrice had polluted the wells. After struggling with enormously complex technical issues, the jury finally agreed that there was not a "preponderance of evidence" that Beatrice had polluted the wells. Only Grace was found responsible. The judge then threw out the verdict against Grace on the grounds that the jury's written decision was confusing and contradictory.

Financially and emotionally bankrupt, Schlichtmann settled with Grace for $8,000,000. After expenses, the victims' families received several hundred thousand dollars each, but no admission of guilt, no apology, and no clean up. Schlichtmann's firm dissolved. Schlichtmann himself moved to Hawaii for several years of soul-searching. Neither W.R. Grace nor Beatrice ever admitted responsibility for the elevated rate of leukemia in Woburn.

Despite the disappointing results in court, the case left a significant legacy. The EPA, with the resources of the government behind it, pursued the issue. They identified Beatrice's 15-acre property as a source of contamination to Woburn's Wells G and H. Today both Grace and Beatrice are paying for the largest and most expensive toxic cleanup in U.S. history, with costs already topping $68,000,000. Dan Kennedy, a reporter who covered the case for years, notes that "the Superfund law makes property owners responsible whether or not they actually contaminated their land." Woburn, he concludes, caused "a sea change in attitude" among government officials.

Virtual trial Science in the Courtroom Contamination in Our Communities: A Case Study of Woburn, Massachusetts

"Toxic Legacy —Behind — and Beyond — the Hype over A Civil Action: A Reporter Revisits the Scene of the Real Woburn Tragedy," by Dan Kennedy, The Boston Phoenix, December 17 - 24, 1998.

"In Toxic Tort Litigation, Truth Lies at the Bottom of a Bottomless Pit," by Michael Asimow, Silver Screen website, February 1999.