PROVINCETOWN - He was a young Navy commander. She was the beautiful daughter of a prominent Baltimore family. . . .

Among the young members of the dashing submarine corps, Lt. Commander Roy Kelhor Jones and his wife, Evelyn Bond Jones, were considered a glamorous pair.

But on Dec. 17, 1927, tragedy struck. Jones was skipper of the S-4, a submarine on maneuvers off Provincetown that sank when struck by the Coast Guard destroyer Paulding.

Yesterday, Jacqueline Jones Hull, daughter of the S-4's skipper, participated in the 45th annual service at St. Mary of the Harbor Church honoring the 40 men who lost their lives aboard the submarine, and the many servicemen and townspeople who struggled vainly to save them. . . .

The sinking of the S-4 was a tragedy that gripped the nation's attention and haunted Provincetown residents for months.

The S-4 was a 231-foot, double-hulled submarine weighing 90 tons. It had just been repaired and refitted at the Navy yard in Portsmouth, N.H., when it was sent to Provincetown Harbor for a deep-water trial course to determine its underwater fitness.

The Paulding had been transferred to the Coast Guard from the Navy, and was used for policing rum-running off the East Coast.

The Paulding had just finished her open-sea patrol and was headed into Provincetown Harbor late the afternoon of Dec. 17 when she rammed the S-4. The collision was about 1,800 yards southwest of Wood End near the tip of Provincetown.

The submarine's ballast tanks were damaged in the collision, causing the vessel to sink 102 feet to the ocean's floor.

Francis Roza of Provincetown was a 19-year-old Coast Guardsman assigned to the Wood End station the day of the accident.

"The seas were vicious that day. And we had gale-force winds. Four of us went out in a 36-foot open boat to try and rescue those we could," he said.

But there was nothing the Coast Guard could do. And in the days that followed, all rescue efforts failed.

The Falcon, the Navy's only salvage ship in the Atlantic, was sent to Provincetown from New London.

Two days after its sinking, Navy divers communicated with six men still alive on the sub by using a wrench to bang out Morse code on the vessel's metal hull. That wrench is now part of a memorial display in a museum at the U.S. Naval Academy in Annapolis, Md.

"There was such a horrible helpless feeling, knowing there were men down there waiting for you to help. But nothing seemed to work," said Roza.

Navy divers nearly lost their lives when sand collapsed a tunnel being dug beneath the submarine.
. . . Local fishermen volunteered to drop grappling lines around the submarine and attempt to haul it into shallower waters.

"To this day I don't understand why those men couldn't have been rescued," said Ernest Tarvers, a retired fisherman from Truro.

"We could have dropped hooks around that sub and hauled her in. She was so close to shore, I just don't understand how we couldn't get her in."

John Lynch of New York City is at work on a book about the S-4.

"There really wasn't much they could do. The only places the grappling hooks could have been attached were the anchor and propeller, and that wouldn't have been enough," he said yesterday.

One good thing did come out of the sinking.

"These were the early days of submarines and those men were, in a sense, pioneers," Lynch said. "This tragedy spurred the military into developing better rescue technology."

. . . Newspapers across the country had a field day with the S-4 sinking, Lynch said. There was cutthroat competition among reporters to dig up the most "sensational or shocking story."

More than 100 people, including veterans, local residents and representatives of the Coast Guard and Navy attended yesterday's simple but moving ceremonies at the church.

Two wreaths were placed upon the cross, but later this week, Captain Anthony Jackett of the fishing vessel Plymouth Belle, will take one of the wreaths to the site of the S-4 sinking.

On this day in 1927, a Navy submarine, S-4, and a Coast Guard cutter collided within sight of Provincetown. The cutter's bow sliced into the submarine's hull, sending it to the bottom of the bay within minutes. The Coast Guard and Navy immediately dispatched rescue ships and divers, but a growing nor'easter and treacherous underwater currents thwarted their attempts to rescue the six trapped survivors. By the time divers reached them again four days after the accident, all six had died. The failed rescue attempt got international media coverage, and an inquiry followed. To the outrage of many, only the captain of the submarine was held responsible for the tragedy. However, subsequent improvements in rescue equipment helped save lives in later sea disasters.

Three months later, salvagers raised the sub and towed it to the drydock at the Charlestown Navy Yard. The S-4 was repaired and returned to active duty as a submarine rescue and salvage test ship. 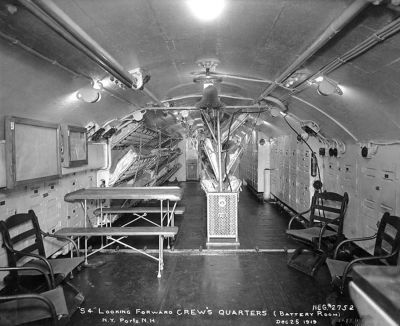 As dusk fell on the Saturday before Christmas of 1927, two Coast Guardsmen stationed at Wood End in Provincetown noticed the periscope of a Navy submarine breaking the surface of the water just in front of the cutter Paulding. Within minutes, the cutter had rammed the sub, which soon came to rest on the ocean floor 100 feet below.

The Paulding's captain immediately sent a distress call and lowered the lifeboats to pick up any survivors. But nothing appeared except a few air bubbles and an oil slick. The Wood End Coast Guard station launched a rescue boat and raced to the spot. For the next six hours they struggled to hook the side of the submarine with a grapple line, but when they finally succeeded, gale force winds snapped the line.

The next morning, Navy rescue ships and divers arrived on the scene. Officers tried to determine if any sailors had survived the initial collision and if it would be possible to rescue them. Despite strengthening winds and worsening seas, the rescuers managed to locate the sub, and a Navy diver dove down to it. He heard noise from inside; it seemed as though at least some members of the crew were still alive. Tapping in Morse code on the hull, the diver asked how many. "Six," came the answer from the forward torpedo room. The survivors estimated the oxygen on board would last 48 hours.

Tapping in Morse code on the hull, the diver asked how many. "Six," came the answer from the forward torpedo room.

The naval officers running the rescue faced a dilemma: should they attach an air hose to bring fresh air to the men trapped in the torpedo room or should they pump air into the ballast tanks in hopes of floating the sub to the surface? Tragically, their decision — to attach the hose to the tanks — proved to be the wrong one. The ballast tanks were more severely damaged than first thought, and rescuers watched in dismay as a stream of air bubbles leaking out of the tanks came to the surface. The already stormy weather deteriorated further; it was no longer safe to send divers into the water.

Using an oscillator attached to the hull of the S-4, the rescuers could communicate via Morse code with the survivors. The six men asked when they could hope to be rescued and received messages from their families. The Navy rear admiral in charge of the operation got many offers of help. He rebuffed them all, including one from the father of a man trapped on the S-4. The Coast Guard cordoned off the area, and officials waited for weather conditions to improve. By the time they did, it was too late. Around 6:00 a.m. on Tuesday morning, roughly 62 hours after the collision, the survivors sent a final heartbreaking message: "We understand."

Around 6:00 a.m. on Tuesday morning, roughly 62 hours after the collision, the survivors sent a final heartbreaking message: "We understand."

Once the weather cleared, the despondent rescuers set to work recovering the bodies of the 38 officers and sailors lost on the S-4. Three months later, salvagers raised the sub and towed it to the drydock at the Charlestown Navy Yard. The S-4 was repaired and returned to active duty as a submarine rescue and salvage test ship.

The sinking of the S-4 led to changes in navigation regulations and new escape and rescue devices for submariners.

Having watched helplessly as the tragedy unfolded, the people of Provincetown did not forget. They began holding a church service every year on December 17th. The tradition continues today. Taps are played and the flag presented, in memory of the men lost on the S-4.

Every year The Church of Saint Mary of the Harbor holds a memorial service to honor those lost in the sinking of the S-4.