Quick freezing at once does away with the space-time limits of perishable food distribution. With frozen foods, neither season nor geography has any meaning, for strawberries in December are exactly the same as strawberries in June, and its just as easy to serve the rich fruits of the tropics on a breakfast table in Maine as it is to serve blueberries.

"Dear Food Industry - I love you" in House Beautiful, January 1955

This is a letter I have been wanting to write for years. I don't think I've
ever told you how much I admire you, how big and fine and bold and imaginative and exciting you are. You might have thought I didn't really appreciate all your care and thought of me. Long before now I should have made it clear. Like any woman happy in love, you've made me feel like a queen...A queen with a whole retinue of tireless servants on call 24 hours a day, every day in the year...honestly I don't mind you doing all my work for me. You can go right on scrubbing the vegetables...

Quoted in "What We Have Found Out About Frozen Foods, " by Elizabeth Sweeney, Journal of Home Economics, January 1949

Somehow, I don't think good old Clarence was testing his frozen food theories on alligator meat up in Labrador....
Login

On this day in 1930, shoppers in Springfield became the first Americans to find frozen food in their grocery stores. A test marketing program was designed to see if people would buy frozen food. And buy it they did. Within a few years, Americans would think nothing of eating fresh-tasting peas in December. The transformation of the American diet was due to the intellectual curiosity and entrepreneurial genius of the man whose name was, and still is, on the package—Clarence Birdseye. A largely self-taught naturalist, he spent five years as a fur trapper in Labrador. He summed up his achievement by saying he had simply taken "Eskimo knowledge and the scientists' theories and adapted them to quantity production."

To meet expenses, Birdseye came up with imaginative schemes to make money from his vast knowledge of the natural world . . . 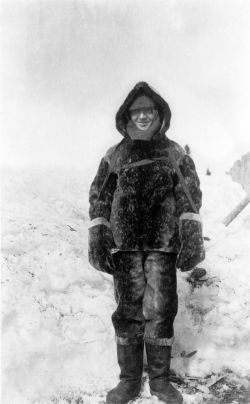 Clarence Birdseye had a lifelong curiosity about the natural world. He combined insight into how things work with an inventive mind, and was constantly devising practical applications of his scientific observations. Over the course of his life, Birdseye received over 300 patents and transformed the way Americans eat. He is remembered today as the "Father of Frozen Food."

Born in Brooklyn in 1886, he was the eighth child of a New York lawyer. The large family spent summers on a Long Island farm, where young Clarence indulged his love of nature. At the age of five, he presented his mother with a mouse skin that he had dressed; before he was in his teens, he was so proficient in taxidermy that he advertised in a sporting magazine to offer instruction at his "American School of Taxidermy." (There is no record that the enterprising youth had any takers.)

Birdseye followed family tradition and entered Amherst College. By this time, however, his father was struggling financially. To meet expenses, Birdseye came up with imaginative schemes to make money from his vast knowledge of the natural world: he caught and sold frogs to the Bronx Zoo for snake food and trapped a rare breed of black rats to sell to a geneticist at Columbia University. After his two years of college, Birdseye's money was exhausted, and he left school to find work. He never finished his degree, and 30 years later, Amherst awarded him an honorary Masters of Arts.

"I ate about everything," he later confessed, "beaver tail, polar bear, and lion tenderloin. And I'll tell you another thing—the front half of a skunk is excellent."

Birdseye turned his interest in animals and environment into his first job. From 1910 to 1912 he was a field naturalist for the Biological Survey of the U.S. Department of Agriculture. In 1912, he went on a six-week cruise to Labrador, and the trip changed his life.

As soon as he arrived in the province, he realized that there was a fortune to be made in breeding and trapping foxes. He spent the next five years living in remote parts of Labrador, traveling by dog sled as he collected furs for re-sale. In 1916 he brought his young wife and infant son to join him; the young family lived in a three-room cabin 250 miles from the nearest doctor.

Food supply posed a constant challenge. Always adventuresome when it came to diet, Birdseye trapped and cooked nearly everything: starlings, blackbirds, whale, porpoise, lynx, alligator, even lizards. "I ate about everything," he later confessed, "beaver tail, polar bear, and lion tenderloin. And I'll tell you another thing—the front half of a skunk is excellent."

As Birdseye struggled to feed his family, he noted how easily food froze in the extreme midwinter cold and that this quickly-frozen food tasted better than food frozen in the spring or fall. He watched the Eskimos as they practiced a rudimentary quick-freezing method. Seeing—and tasting—their excellent results, he deduced that the superior texture, flavor, and natural juices of items frozen very quickly was due to the fact that only small ice crystals formed. (The large crystals that form in slowly frozen food rupture its cellular structure, which causes the quality to deteriorate). Birdseye immediately set to work developing a commercial application for his findings. He began by freezing vegetables and experimented with ways to quick-freeze in quantity.

Many people were wary of frozen food. Was it safe? How would it taste?

World War I interrupted Birdseye's work. When he returned to his commercial ventures after the war, he set up shop in the corner of an ice house and tried quick-freezing fish. With a capital investment of $7.00 for an electric fan, buckets of brine, and cakes of ice, Birdseye quick-froze haddock fillets. In 1924, Birdseye moved his operations to Gloucester to be near a source of fresh fish. He and a small group of associates opened "General Seafoods Company," later General Foods Corporation.

To make his invention marketable, Birdseye developed the first commercially-practical freezer, portable freezer cases for stores, and methods of packaging frozen products for sale to retail customers. In June of 1929, Birdseye's business was sold to Frosted Foods for $22,000,000; the new owners kept him on their research and development staff and his name on the product.

The Gloucester-based corporation faced one more major challenge: public acceptance of the product. Many people were wary of frozen food. Was it safe? How would it taste? On March 6, 1930, a test marketing program began in Springfield. The company offered 27 items, from vegetables and fruits to fish and meats. The products passed the consumer test and eventually transformed Americans' diet by increasing seasonal availability, variety, and healthfulness of preserved foods.

". . . this curiosity, combined with a willingness to assume risks, has been responsible for such success and satisfaction as I have achieved in life."

Birdseye was an inventor and experimenter in the tradition of Thomas Edison and Benjamin Franklin. He said of himself, "I do not consider myself to be a remarkable person. I did not make exceptionally high grades when I went to school. I never finished college. I am not the world's best salesman. But I am intensely curious about the things which I see around me and this curiosity, combined with a willingness to assume risks, has been responsible for such success and satisfaction as I have achieved in life."

Clarence Birdseye is stop number 33 of the Gloucester Harbor Walk.

This Mass Moment occurred in the Western and Northeast regions of Massachusetts.