For preventing disorders, arising in several places within this jurisdiction by reason of some still observing such festivals as were superstitiously kept in other communities, to the great dishonor of God and offense of others: it is therefore ordered by this court and the authority thereof that whosoever shall be found observing any such day as Christmas or the like, either by forbearing of labor, feasting, or any other way, upon any such account as aforesaid, every such person so offending shall pay for every such offence five shilling as a fine to the county.

From the Records of the General Court, Massachusetts Bay Colony, May 11, 1659.

While I found today's "Mass Moments" interesting, I was very disappointed that the birth of Clara Barton was not picked as today's topic. Born in North Oxford, Massachusetts, Ms. Barton devoted her life to helping others, both in this country and abroad. She is most remembered today as founder of the American Red Cross. ------------------------- E. Thomas
Xmas Holiday

Howz about making the last 2 weekends of December legal, "long weekends", ie: add Friday, legally, as a day off, rather than juggling the 25th thruout the calender week? To celebrate, whatever...I think Santa and Jesus would approve. Puritans, and Christian, strict constructionists, be $%@&#!!
1659 law against Christmas reasonable at the time

I believe the early Massachusetts residents chose wisely in making this law because of the times they lived in. From the Moment I understand that the holiday was celebrated in a similar way to Halloween; the wassailing sounds much like trick or treat. The 4 first colonies, Massachusetts, New Haven, Plimouth, and Connecticut had founded their union with one another only 10 years before. Massachusetts was a much smaller place in those times. Survival was dependent on sobriety and hard work, and a lot of patience. I don't see it as "religious intolerance" as your teachers' title states, but an effort at civil cooperation and responsibility. Had the day been characterized by pious observance of the birth of Christ, I doubt there would have been a law forbidding Christmas!! However, the Church of England was seen as corrupt, which was why separatists were called Puritans (not by themselves), and little better than Rome. We know that the people of Plimoth desired to live simply as the early church had done, sharing property, and they weren't sympathetic to the Pope's holidays because of what they saw as corruption. Remember, the Christmas that was out-lawed in 1659 wasn't the sweet children's Christmas of 1856. ------------------------- Karin Zachary
Login

On this day in 1659, a law was passed by the General Court of Massachusetts Bay Colony requiring a five-shilling fine from anyone caught "observing any such day as Christmas or the like, either by forbearing of labor, feasting, or any other way." Christmas Day was deemed by the Puritans to be a time of seasonal excess with no Biblical authority. The law was repealed in 1681 along with several other laws, under pressure from the government in London. It was not until 1856 that Christmas Day became a state holiday in Massachusetts. For two centuries preceding that date, the observance of Christmas — or lack thereof — represented a cultural tug of war between Puritan ideals and British tradition.

Almanacs published in the Bay Colony did not mark December 25th as Christmas Day. 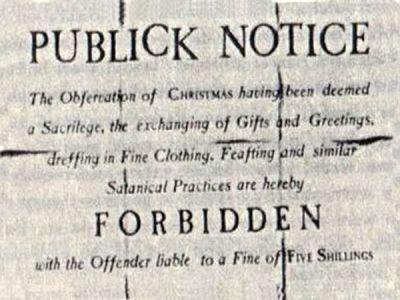 Like other Massachusetts Puritans, the Reverend Increase Mather considered Christmas a "profane and superstitious custom." The Boston minister wrote in 1687 that December 25th was observed as the birth date of Christ not because "Christ was born in that Month, but because the Heathens Saturnalia was at the time kept in Rome, and they were willing to have those Pagan Holidays metamorphosed into Christian [ones]." He was correct.

The English men and women who came to New England in the 1600s were familiar with Christmas as it was celebrated in Britain. The Christmas season began in late November and continued well into the New Year, coinciding with a natural break in the agricultural cycle. It was a time of feasting, excessive alcohol consumption, general merry-making, and "misrule" (the turning of social conventions upside down). Men of means were expected to open their homes and furnish those less well off with food and drink.

Massachusetts Puritans sought to put an end to the celebration of Christmas with all of its excesses. Almanacs published in the Bay Colony did not mark December 25th as Christmas Day.

These men were re-enacting the time-honored English tradition of "wassailing," where lower-class revelers entered the homes of their social superiors at Christmas time.

While the Puritans succeeded in suppressing most holiday revelry, they could not quell it completely. The authorities condemned fishermen and other residents of the region's coastal villages as irreligious; they behaved in unacceptable ways, from heavy drinking to "keeping Christmas."

One Christmas conflict occurred in Salem in 1679. On the night of December 25th, four men entered the home of farmer John Rowden and helped themselves to seats by the fire, began to sing, and then demanded cups of the Rowdens' pear wine. After being repeatedly refused, they pretended to leave the house, only to return and demand money. Turned out again, they continued their harassment, throwing "stones, bones, and other things" at the house and stealing several pecks of apples. These men were re-enacting the time-honored English tradition of "wassailing," where lower-class revelers entered the homes of their social superiors at Christmas time. In exchange for singing and mumming, the uninvited guests generally received gifts of food, drink, or money. In England, the tradition had long fostered good will between people who occupied different rungs of the social ladder, but as the events in Salem indicate, this was not so in Puritan New England.

Under pressure from the British government, Massachusetts repealed the law against Christmas festivities in 1681. The holiday was widely, and sometimes wildly, celebrated from 1687 to 1689, the period after Massachusetts Bay lost its charter and was governed by an English official. When the colony regained its charter in 1689, public expressions of Christmas cheer ended, at least for the time being.

. . . fear that excessive drinking, aggressive begging, and riotous processions associated with Christmas posed a threat to public order moved middle- and upper-class Americans to re-make Christmas as a family holiday.

The observance of Christmas did not disappear altogether, and soon a movement was afoot to purify and temper the custom, rather than stamp it out altogether. By the 1750s the most common New England hymnal, the Bay Psalm Book, included Christmas hymns, and by 1760 most almanacs named December 25th Christmas Day. Christmas music by New England composers appeared in song books published in the second half of the eighteenth century; the Worcester Collection of Sacred Harmony, published by Isaiah Thomas in 1786, even included Handel's "Hallelujah Chorus."

In the early nineteenth century, fear that excessive drinking, aggressive begging, and riotous processions associated with Christmas posed a threat to public order moved middle- and upper-class Americans to re-make Christmas as a family holiday. The social and business elite collaborated with the press to reshape Christmas into a well-regulated domestic celebration. The chief beneficiaries of this kind of Christmas were children.

By the 1840s many states began to make Christmas a legal holiday. An 1856 Massachusetts law accorded this status to Christmas.

The gift-bearing St. Nick and present-laden fir tree coincided with a consumer revolution in nineteenth-century New England. Merchants and shopkeepers capitalized on the new materialism by advertising "thoughtful gifts" for children and others within the domestic circle.

By the 1840s many states began to make Christmas a legal holiday. An 1856 Massachusetts law accorded this status to Christmas, Washington's Birthday, and July 4th. The success of this measure was due to the growing number of Irish Catholics in the electorate. Public offices were also to be closed on these days, and it was expected that businesses would follow suit. In time they did. In the twenty-first century, December 25th remains one of the few days that the nation's economic engine is still.

Plimoth Plantation is open during the month of December with programs that address the complicated history of the holiday during the period of colonial settlement.

Testimony against Several Profane and Superstitious Customs, Now Practiced by Some in New-England, by Increase Mather (1687).

The Battle for Christmas, by Stephen Nissenbaum (Alfred A. Knopf, 1996).