We the citizens of Massachusetts, are once again given the opportunity to join with the Children's Cancer Research Foundation, in cooperation with the Variety Club of New England, the Boston Braves, and the Motion Picture Industry in the noble fight against Cancer.

Cancer does not discriminate in its attack. Race, color and creed provide no barrier against this horrible visitation.

Children affected with Cancer present a grave problem. The alarming increase in the number of children stricken in this fashion and the present need for greater facilities whereby Cancer can be studied and its victims treated, commends this public appeal as worthy of our best efforts.

The peoples of this State have shown by the quality and quantity of their generosity toward this charitable activity that they feel that the "JIMMY" Fund is worthy of the support of all citizens of this Commonwealth.

Therefore, I, Paul A. Dever, Governor of the Commonwealth of Massachusetts, do hereby proclaim as

and do urge the people, through the medium of the "JIMMY" Fund to do your part in stamping out Cancer among children.

GIVEN at the Executive Chamber in Boston, this fifteenth day of August, in the year of our Lord one thousand nine hundred and fifty-one, and of the Independence of the United States of America, the one hundred and seventy-sixth.

By His Excellency the Governor,

Secretary of the Commonwealth,

GOD SAVE THE COMMONWEALTH OF MASSACHUSETTS

For those who are interested the link for the Dana-Farber Caner Institute is: www.dfci.harvard.edu
Ted Williams

Ted Williams was HUGE in promoting the Jimmy Fund. How come he wasn't mentioned here at all?
Login

On this day in 1951 the Children's Cancer Research Foundation was incorporated. Founded by pioneering Boston physician Sidney Farber, it was the first cancer center in the country designed specifically for children. In the days when a diagnosis of childhood leukemia carried little hope for survival, the center combined treatment that extended children's lives and research that might someday lead to a cure. The foundation adopted the name "Jimmy Fund," and with the help of countless people from all walks of life — baseball stars and police chiefs, Little League players and moviegoers — the fund has raised millions of dollars to provide care for children battling cancer. Now called the Dana-Farber Cancer Institute, it is one of the foremost cancer centers in the world. 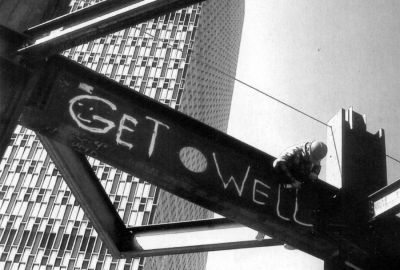 For Dr. Sidney Farber it was always about the children. "When I was young," he once recalled, "I was deeply disturbed by the little white caskets leaving homes with tiny victims of diphtheria and scarlet fever. Working with children and wanting to help them was natural to me." The children he most wanted to help were those suffering, and usually dying, from cancer.

Leukemia was first identified in 1845; a century later the prognosis had not improved. Children and adults died, usually within weeks of being diagnosed. In 1928 a year after his graduation from Harvard Medical School, Sidney Farber began work as the only pathologist at Children's Hospital in Boston. Years of research led to a dramatic breakthrough in the treatment of leukemia.

Farber knew that folic acid stimulates the growth and maturation of bone marrow. If a drug could be found that chemically blocked folic acid, he reasoned, it would shut down the production of abnormal marrow associated with leukemia.

A pharmaceutical company had synthesized this "antagonist" to folic acid (aminopterin), and in November 1947, Farber tried the drug on 16 terminally ill children. Ten of them went into temporary remission as a result of a drug — an unprecedented result. Farber had not yet found a cure, but he knew he could help his patients live longer. Because of this work, many people consider him the father of modern chemotherapy.

People who had been listening on car radios drove to Children's Hospital and left donations at the front desk. Money poured in from across the nation. Envelopes arrived addressed simply "Jimmy, Boston, Mass." 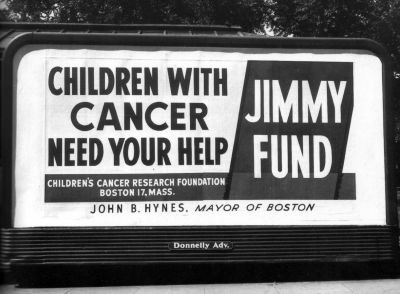 With generous financial support from the Variety Club, a charity associated with the entertainment industry, Farber founded the Children's Cancer Research Foundation, a small outpatient clinic at Children's Hospital. While he concentrated on research and patient care, the Variety Club began an extraordinary fundraising drive. They soon found a partner in the Braves, Boston's National League baseball team.

George Swartz of the Variety Club convinced the host of the popular weekly radio show Truth and Consequences to feature a boy with leukemia and ask listeners to contribute to finding a cure. On May 22, 1948, a nationwide audience learned that children, as well as adults, could have leukemia but that some young patients lived an additional 22 months because of advances at Farber's cancer center. Then they listened to 12-year-old "Jimmy" describe his joy at having Braves players visit his hospital room and sing "Take Me Out to the Ballgame."

The response to the broadcast was instantaneous. People who had been listening on car radios drove to Children's Hospital and left donations at the front desk. Money poured in from across the nation. Envelopes arrived addressed simply "Jimmy, Boston, Mass." Collections were held at every movie theater; there were bake sales, softball games, parades — all for the Jimmy Fund. By the end of the first summer, the Jimmy Fund had raised $231,485.51. It was just the beginning of a fundraising phenomenon that continues to the present day.

"Care without research," Farber insisted, "has no meaning. We cannot be content with lengthening a child's life, we must always think this may be the child we save."

Over the next three years, the fund raised $1,000,000 toward the construction of the Jimmy Fund Building, dedicated in January 1952. It became known as "the house that Jimmy built," and it embodied Farber's ideas about medical care. He was among the first to recognize that a clinic for children with cancer should provide what we now call total patient care. His axiom was: "Everything begins and ends with the patient." Another Farber principal was that "you never do anything to a patient that you would not do to your own child."

The building included two floors of research laboratories. "Care without research," Farber insisted, "has no meaning. We cannot be content with lengthening a child's life, we must always think this may be the child we save." Research conducted at the Jimmy Fund Building has helped bring cure rates for childhood cancers from less than 10 percent to over 75 percent.

Extraordinary changes have taken place at Dr. Farber's cancer clinic since the famous radio broadcast. The Jimmy Fund Building has been enlarged; new buildings, housing hundreds of research laboratories, have been constructed. The staff has grown to more than 3,000, and in 1969, the institute's charter was expanded to provide services to patients of all ages.

The name has changed, too. Shortly after Dr. Farber's death in 1973 — at work, as he had always hoped — the board renamed the center the Sidney Farber Cancer Institute. In 1981 it became the Dana-Farber Cancer Institute in recognition of the more than $33,000,000 donated by the Dana Foundation. The Police Association, which took up the cause in 1949, remains a staunch supporter. The Red Sox picked up where the Braves left off when they moved to Milwaukee. Fundraising activities now include an annual 192-mile bike-a-thon, among many other events. No one knows for sure, but the best guess is that since its inception the Jimmy Fund has raised more than $400,000,000 for cancer care and research.

As for "Jimmy," he was one of the few children Farber treated in his first clinic who survived the disease. His name was Einar Gustafson. To outsiders, Dr. Farber always referred to his patients as "Jimmy" and "Janie," never by their real names. "Jimmy," he said, "is any child with cancer." When the institute staff and the public met Einar Gustafson in 1998, he still had the small Braves uniform he had received 50 years earlier. "My face used to stand for how long a child could live with cancer," he said. "Now my face stands for how long a child can live without cancer."

The Center for the History of Medicine at the Countway Library, a joint alliance of the Harvard Medical School and Boston Library of Medicine, mounts exhibits related to the history of medicine, which are open to the public.

Who was "Jimmy"? History of Dana-Farber Cancer Institute