From the 1856 journal of Charlotte Forten:

Tuesday, March 13. Went through the examination and entered the Normal School. I have not yet heard from father; but as I had to give no pledge to remain a certain length of time, and this is the only opportunity I should have until another term, I thought it best to enter the school. It was with a very delightful sensation of relief that I received the welcome intelligence of my being admitted; for greatly had I feared it might be otherwise….

Friday, March 16. To my great surprise, received a letter from father summoning me to return home as soon as possible. I feel deeply grieved; it seems harder than ever to leave now that I have just entered upon a course of study which I so earnestly hoped would thoroughly qualify me for the duties of a teacher. The few days I have spent at the Normal School have been very pleasant although I have felt a little strange and lonely. But the teachers are kind, and the teaching so thorough and earnest that it increases the love of knowledge and the desire to acquire it…. Although it would give me much pleasure to see my kind friends at home, I cannot but regret that I must go now, feeling as I do that a year longer at school would be of great benefit to me. This evening went to Miss Shepard [her former teacher] who earnestly declared that I must not go, and who made me a very kind offer, which I do not think can be accepted with the little hope I now possess of being able to repay it.

Saturday, March 17. This morning Mr. Edwards [the principal of the Normal School] came to see me, and told me that he had no doubt of my being able to obtain a situation as teacher here if I went through the Normal School. He wished me to write to father and assure him of this. Miss Shepard urged me to consent to her writing to him about what she proposes. I do indeed feel obliged to her for her very great kindness to me, whether it be as she wishes it or not. I shall continue at school until I hear from home again, as Mr. Edwards said he would like to have me do so.

On this day in 1862, Charlotte Forten boarded a ship that would take her to South Carolina to teach newly-freed slaves. Forten had lived her entire life in the North and several years in Salem, where she graduated from Salem Normal School (now Salem State University) and began a teaching career. Few schools were willing to hire an African American to teach white students, but the principal of the Normal School helped her secure a position in one of Salem's integrated public schools at an annual salary of $200. The daughter of staunch abolitionists, Charlotte Forten left Salem to become the first and one of the only black teachers to heed the call to go to the Union-controlled Sea Islands off South Carolina.

No black student had ever been admitted to a teacher training program in Massachusetts. 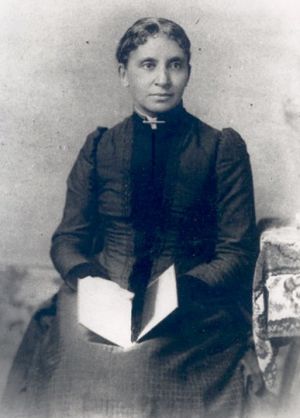 Seventeen-year-old Charlotte Forten was understandably apprehensive when she took the entrance examination for the Salem Normal School in the early spring of 1855. Her father Robert did not approve. He wished his daughter to return to her grandparents' home in Philadelphia. If Charlotte was admitted, she would have to borrow the money for tuition. And if she completed the course, she had no idea if she would get a job. Most daunting of all, Charlotte Forten was black, and no black student had ever been admitted to a teacher training program in Massachusetts.

Fortunately, she had the support of Salem's free black community. With their help and financial assistance from an anonymous white benefactor, she not only graduated from the Normal School but had a distinguished career as a teacher, author, and advocate for freed slaves.

Charlotte Forten came from one of the country's leading black families. Her grandfather James had risen from employee to owner of a sail making company and amassed a fortune of over $100,000. Charlotte grew up in comfort, traveled widely, and enjoyed a wide variety of social and cultural activities.

The Fortens were deeply committed to ending slavery and combating racism. Her grandfather petitioned Congress to end the slave trade and published pamphlets protesting racist laws. He played a central role in the American Anti-slavery Society. The Forten women helped found the Philadelphia Female Anti-slavery Society. The Fortens were part of a network of prosperous, well-educated, and socially-active African Americans in New York, Boston, and Salem, all of them engaged in anti-slavery work.

The Fortens were part of a network of prosperous, well-educated, and socially-active African Americans in New York, Boston, and Salem, all of them engaged in anti-slavery work.

Charlotte's mother died when she was a small child. An advocate of racial justice, her father expected his daughter to do her part. He educated Charlotte at home until she was 16. In spite of the strong Quaker influence, Philadelphia's schools were still rigidly segregated. In 1853 Robert Forten sent Charlotte to complete her schooling in Salem.

Robert Forten chose Salem because the port city of 8,000 had a reputation for tolerance and cosmopolitanism. Salem merchants traded with every corner of the world. People from the Middle East, China, India, and Africa were not an unusual sight on Salem's streets. A number of successful and public-spirited African Americans made Salem their home. Perhaps the city's greatest attractions for Robert Forten was that, after a long and difficult fight, the black community had won an end to segregation in the city's public schools.

Forten arranged for his daughter to live with the Remonds, one of Salem's most respected black families. Like the Fortens, the Remonds were ardent abolitionists. They sheltered fugitive slaves, hosted black and white anti-slavery lecturers, and were active in various anti-slavery organizations. One son, Charles, was the anti-slavery movement's first black lecturer and the first African American to address the Massachusetts legislature. His sister Sarah also became an abolitionist lecturer; she courageously traveled to Great Britain, where she raised a considerable amount of money for the cause.

The day she received her diploma was, she told her diary, "among the happiest in my life."

Charlotte Forten thoroughly enjoyed living with the Remonds. She had an active social life — attending lectures, playing music and cards, taking walks — and studied hard. She proved to be a gifted student and talented writer. Even in Salem, however, a black girl found it difficult to make friends with her white classmates. Charlotte was fortunate that the principal was a woman who treated her with affection and respect.

As graduation approached, her teachers and friends urged her to take the entrance examination for the Salem Normal School. Convinced that education was essential for racial betterment, Charlotte's father had long urged her to become a teacher. She herself believed that her studies enabled her "to do much towards changing the condition of [her] oppressed and suffering people."

Once she enrolled at the school, she found the teaching "so thorough and earnest that it increases the love of knowledge and the desire to acquire it." The day she received her diploma was, she told her diary, "among the happiest in my life."

Few schools were willing to hire an African American to teach white students, but the principal of the Normal School helped her secure a position in one of Salem's integrated public schools at an annual salary of $200. When she resigned because of poor health in 1858, a Salem newspaper complimented her on her performance and praised the school for undertaking the "experiment" of hiring a black teacher for white children.

"I wish some of those persons at the North who say the race is hopelessly and naturally inferior, could see the readiness with which these children, so long oppressed and deprived of every privilege, learn and understand."

Although she never enjoyed robust health, Charlotte Forten was the first and one of the only black teachers to heed the call to go to the Union-controlled Sea Islands off South Carolina. The freed slaves on St. Helena Island desperately needed teachers if they were to have a chance at a better life.

Charlotte taught 140 children in a single classroom and found her new environment challenging. She was surrounded by dire poverty and squalor; the Sea Island climate was oppressive, and yellow fever was a constant threat. The ex-slaves students spoke the Gullah dialect and practiced African customs that she found strange. The danger of Confederate attack was ever-present, and she was terrified of falling into enemy hands. Even the Union soldiers showed little respect for a black woman.

But she was deeply moved by the former slaves' passion for freedom and by their deep desire to learn. "I do not believe that there is a man, woman, or even a child that would submit to be made a slave again," she wrote home. "I wish some of those persons at the North who say the race is hopelessly and naturally inferior, could see the readiness with which these children, so long oppressed and deprived of every privilege, learn and understand." She remained on St. Helena for a year and a half, until her frail health forced her to return to the North.

After the Civil War, she continued teaching and writing. In 1878, at the age of 41, she married Francis Grimké, the 28-year-old minister of the Fifteenth Street Presbyterian Church in Washington, D.C. Although she was often ill, Charlotte Forten Grimké spent the rest of her life working for the advancement of her race. In 1896 she was a founding member of the National Association of Colored Women.

Web site for PBS program: Only a Teacher: Schoolhouse Pioneers National Humanities Center: Excerpts from the Journal of Charlotte Forten, 1854-1859

"To Educate the Heart, " by Gwendolyn Luella Rosemond and Joan M. Malone, in The Sextant, 1988.

We Are Your Sisters: Black Women in the Nineteenth Century, ed. by Dorothy Sterling (W.W. Norton, 1984).