All the girls in the dormitory suddenly wakened, screamed in concert with Elizabeth, and many of them sprang out of bed in affright. I could just discern their figures moving helplessly about in the darkness. Suddenly the door opened, and Sister Mary Austin appeared; by the light of a lantern swinging from the hall ceiling opposite the door I could see that she was shaking all over, but she tried to control the trembling of her voice, as she called out, "Girls, don't be frightened! There can't be any danger, but you had better dress yourselves."

The younger girls ran up to her, and clung to her screaming, "O, the mob, the mob, - we shall all be killed! O, what shall we do, what will become of us?"

Andrew Jackson defeated John Quincy Adams for reelection in 1828 not 1834. Jackson lost to Adams in 1824 when no candidate when no candidtae won a majority in the Electoral College and the election was decided by the House of Representatives
Benjamin F. Butler

The 17-year-old "man" was jailed for seven months, according B. F. Butler, who also as a 34-year-old representative to the [Great and General Court?] nearly passed a bill for reparations. See his Autobiography, page 110-113.

This documents cites other reasons for the burning of the convent in Charlestown.

On this day in 1834, the Ursuline Convent in Charlestown lay in ruins. The night before, a Protestant mob sacked it and burned it to the ground. The nuns who lived in the elegant building and their students at the female academy they ran were forced to flee for their lives. The rioters were mostly poor Yankee laborers who feared and hated Irish Catholic immigrants. While some of Boston's wealthiest Protestants sent their daughters to the Ursuline Academy, most Yankees harbored a deep prejudice against Catholics. Long suspicious of "popery," Protestant Boston was receptive to the malicious rumors that swirled about the convent. The convent burning was a prelude to the fierce anti-Catholicism that would greet the famine Irish who flooded into Boston a decade later.

By the early 1830s, 50 to 60 Protestant girls from privileged families were enrolled at the Ursuline Academy. 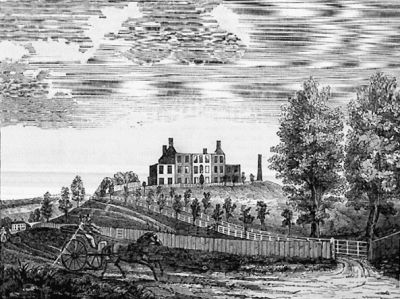 Catholics were unwelcome in early Massachusetts. Their presence was outlawed until 1692, and even then they were not allowed to establish a church or worship publicly. It was not until Catholic France came to the Americans' aid during the Revolution that attitudes towards Catholics began to change — a little. In 1780 the state's new constitution guaranteed freedom of religion, and prosperous, well-educated French Catholics were tolerated. But they hardly represented a threat: in 1795, 95% of the Massachusetts population was descended from British Protestants.

The Ursuline Convent had been a longtime dream of one of the first Catholic priests in Boston. The Rev. John Thayer wanted to help his impoverished parishioners by bringing Ursuline nuns to teach the city's poor Catholic girls. The Ursulines were pioneers in women's education, and their first-rate schools in Europe attracted both Catholics and Protestants.

In 1790 when Thayer first came to Boston as a priest, his dream seemed unattainable; there were not enough Catholic families to support such a venture. But in the next quarter century, the number of Irish immigrants grew to nearly 2,000. Doggedly pursuing his goal, Thayer recruited four Irish women to train at an Ursuline Convent in Canada and then establish a nunnery and school in Boston. By 1822, seven Ursuline Sisters had arrived in Boston; three years later, they moved to a hilltop in Charlestown (now Somerville).

The Ursulines were pioneers in women's education, and their first-rate schools in Europe attracted both Catholics and Protestants.

With the support of the Bishop of Boston, they constructed a three-story brick convent to house the nuns, a chapel, and a school, surrounded by beautiful terraced gardens and greenhouses. A tall wooden fence enclosed the entire 24-acre property and hid it from public view.

The funds for this elegant estate came from tuition paid not by poor Irish Catholics, as Thayer originally envisioned, but by some of Boston's wealthiest Protestant families. Members of Boston elite were willing to pay dearly for their daughters to have an education equal to what was available in the best boys' schools. By the early 1830s, 50 to 60 Protestant girls from privileged families were enrolled at the Ursuline Academy.

But trouble was brewing. The convent stood at the top of a hill. At the bottom was a community of struggling Yankee brick makers. In 1830 the Irish made up 11% of Boston's population and were competing with native-born laborers for unskilled jobs. The Irish not only posed an economic threat but, as Catholics, a religious one, too.The conflict took on a political dimension when the Irish supported Andrew Jackson over Massachusetts' native son John Quincy Adams in the 1834 presidential election.

A superstitious public already viewed Catholicism as a dangerous realm of secret rituals and mystical powers.

Boston's Irish Catholic population doubled in the 1830s; religious, ethnic, economic, and political tensions mounted almost as fast. Stories of papist plots were everywhere — in sermons, on street corners, at taverns and bars. The mysterious doings at the Ursuline Convent were the subject of endless rumors. The tales of kidnappings, forced conversions, murders, scandalous sexual activity mimicked a popular new literary genre, the gothic novel. A superstitious public already viewed Catholicism as a dangerous realm of secret rituals and mystical powers. However far-fetched they were, stories of women held in dungeons and crypts filled with infants' skulls stirred up fear and anger.

The convent's strong-willed, imperious Mother Superior did not help matters. A community of women led by a woman was a novelty, and one that most Americans found alarming. Her assertive, even arrogant manner — so far from the submissive, domestic norm — only reinforced the view that something unnatural was going on within the convent walls.

August 11th was an oppressively hot night. An unruly, drunken mob of laborers, sailors, apprentices, and hoodlums gathered at the gates of the convent. They demanded to see one of the sisters who figured in a number of the rumors. When the Mother Superior refused, the men began to tear down the convent's fence and used the wood to feed a roaring bonfire. The fire alarm was sounded, but Charlestown's Protestant firefighters did nothing to fight the blaze.

The rioters shattered the convent's windows, broke down the front door, and burst into the building.

The rioters shattered the convent's windows, broke down the front door, and burst into the building. They went on a rampage, destroying furniture, musical instruments, books, and religious items, and then set the building on fire. The nuns gathered their terrified students and barely escaped out the back, fleeing through a hole that the Mother Superior ripped in the back fence. Dressed only in their nightclothes, they ran through the fields to a farmhouse a half-mile away, where they watched the convent burning. By daybreak, it lay in smoldering ruins.

The next day, a committee of respected citizens was formed to investigate the rumors and the riot. The nuns were cleared of any illicit activities; 13 men were arrested for rioting. When the case came to trial, the jury convicted only one man, and the governor later pardoned him.

The convent was never rebuilt. Its charred remains stood for the next 40 years as a reminder of the virulent prejudice against Catholics. The site was leveled in 1875, and the bricks were incorporated into Boston's Cathedral of the Holy Cross.

The section of Charlestown where the Ursuline Convent once stood is now East Somerville. A marker in Chuckie Harris Park mentions the convent, which once stood nearby.

"Passing the Torch: Boston Firemen, 'Tea Party' Patriots, and the Burning of the Charlestown Convent," by Daniel Cohen in Journal of the Early Republic (Vol. 24, No. 4, Winter 2004).

Lifting the Veil: Remembering the Burning of the Ursuline Convent, ed. by Nancy Natale and Nancy Lusignan Schultz (Somerville Museum, 1997).

Fire and Roses: The Burning of the Charlestown Convent, 1834, by Nancy Lusignan Schultz (The Free Press, 2000).