My readers have opportunities of judging for themselves whether the influences and tendencies which I distrusted in America had any existence but in my imagination. They can examine for themselves whether there has been anything in the public career of that country since, at home or abroad, which suggests that those influences and tendencies really did exist. As they find the fact, they will judge me. If they discern any evidences of wrong-going, in any direction that I have indicated, they will acknowledge that I had reason in what I wrote. If they discern no such thing, they will consider me altogether mistaken -- but not wilfully.

Prejudiced I am not, and never have been, otherwise than in favour of the United States. I have many friends in America, I feel a grateful interest in the country, I hope and believe it will successfully work out a problem of the highest importance to the whole human race. To represent me as viewing America with ill-nature, coldness, or animosity, is merely to do a very foolish thing, which is always a very easy one.

I recall that when he visited Maine on this trip, he rode on the train near an 11 year old girl, Kate Douglas, who in later life was known as Kate Douglas Wiggin, author of Rebecca of Sunnybrook Farm.
Dickens Visited New Bedford, too.

I recall that when he visited Maine on this trip, he rode on the train near an 11 year old girl, Kate Douglas, who in later life was known as Kate Douglas Wiggin, author of Rebecca of Sunnybrook Farm.
Login

On this day in 1867, Charles Dickens began his second American reading tour at Boston's Tremont Temple. An enthusiastic audience, which included literary stars Henry Wadsworth Longfellow and Ralph Waldo Emerson, seemed to have forgotten Dickens's widely known unflattering views of the United States described in his book American Notes. A 55-year-old Dickens read selections from A Christmas Carol and The Pickwick Papers. Although Dickens was in declining health, he embarked on an ambitious travel schedule. Six months later, having given more than 400 readings, Dickens returned to Boston once more before concluding his U.S. tour in New York City. He died two years later, having written 14 novels, several of which are classics of English literature.

He used a book only as a prop; he was so familiar with the material that he could improvise with ease. 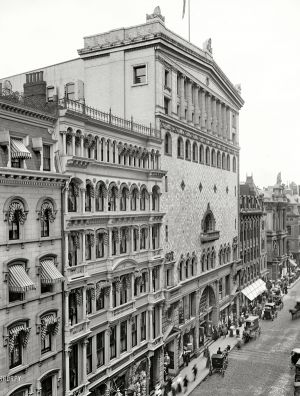 When Charles Dickens arrived in Boston on November 19, 1867, he was greeted by his manager and his Boston-based publisher. The celebrated English author spent several days at the Parker House hotel recuperating from the voyage. During his earlier American tour in 1842, Dickens had attended many tributes and other events held in his honor. In 1867 his failing health meant that he was more likely to be found in his hotel room, preparing for his readings, than at a dinner party.

Dickens used the same stage props as he did in England: a large maroon backdrop, an elaborate system of gas lights, and a specially designed waist-high desk that included a block for resting his elbow and a rail near the floor for him to rest his foot. Dickens began his two-hour performances precisely at eight o'clock in the evening. He opened with a 90-minute reading, stopped for a brief intermission, and then gave a second, much shorter reading.

As painstaking a performer as he was a writer, Dickens had prepared diligently for the tour, rewriting and memorizing key passages from his books especially for these engagements. He used a book only as a prop; he was so familiar with the material that he could improvise with ease.

He closed by telling the audience, "In this brief life of ours, it is sad to do almost anything for the last time . . ."

His itinerary included Boston, Providence, Hartford, New Haven, New York City, Philadelphia, Baltimore, Washington, D.C. (where he met President Andrew Johnson), Albany, Rochester, Syracuse, and Buffalo. He was too exhausted to continue on to Chicago, the western states, and Canada.

Wherever he went, he drew large and enthusiastic crowds. After his first U.S. tour, Dickens had published American Notes and Martin Chuzzlewit, both of which included scathing criticism of Americans. But 25 years later, his audiences had either forgotten or did not care.

A responsive audience could still raise Dickens's spirits, but fatigue often left him depressed. Flu-like symptoms, insomnia, and an inflammation of his foot, which forced him to walk with a cane, plagued him throughout the 1867-68 tour. Dickens was grateful for the much-needed income his readings generated — $140,000, close to $2,000,000 today — but he longed for home.

On April 8, 1868, Dickens returned to Boston to give the last performance of the tour. Prolonged applause followed the reading. He closed by telling the audience, "In this brief life of ours, it is sad to do almost anything for the last time . . . Ladies and gentlemen, I beg most earnestly, most gratefully, and most affectionately, to bid you, each and all, farewell."

"Dickens in America," by David Perdue

"Dickens in America," by Steve King