92,000 TONS OF STEEL, 459,000 TONS OF CONCRETE AND THE WIDEST VEHICULAR TUNNEL IN THE WORLD TO SMASH THE CITY'S TRAFFIC BOTTLENECK

How soon can we use it? That's the question most folks ask about the Central Boston Artery.

Then come questions about size, where it starts and ends, how many motor vehicles will use it, why its unique among Massachusetts highways and unusual anyway.

During recent months, the most spectacular part, construction of the towering steel skeleton of the elevated half of the highway, has been watched by scores of thousands in downtown Boston. . . .

How many vehicles can it carry comfortably?

About 90,000 every twenty-four hours, approximately 45,000 in each direction. Many, maybe a majority, will use only part of the expressway. They'll be men and women working or shopping in downtown Boston or truck drivers delivering or picking up loads there. They'll leave the expressway or come onto it by ramps.

you write: Spectacle Island, which received much of the fill from the project... most of it (13 million tons) went to Quincy/Milton line to create largest landfill in state's history, now the 27-hole Granite Links golf course, whose developers were paid $100 million to pile the dirt on public land a lot ran off and killed all the shellfish in Black's Creek developers promised to provide walking access but now exclude everyone but golfers Tom Palmer Friends of the Blue Hills
The Big Mistake!

I respectfuly suggest you update your info on total cost. The Boston Globe recently reported that, including debt service, the cost would be over $22 BILLION. The original estimate was $2.5 BILLION with the feds provideing 90% of the cost. Turns out, when all is said and done, the feds paid for about 27%, a far cry from the 90% promised. While the Ted Williams Tunnel is one of the positive aspects of this project the only other thing it has accomplished is to put our traffic congestion undergorund in leaking tunnels that may require hundreds of millions of dollars to correct.
Flow of traffic.

Again, respectfully disagree the flow of traffic has not been improved other than providing a third tunnel, which goes directly to Logan Airport, thus making it easier for folks south of Boston to get to Logan. In the final analysis for OVER 22 billion dollars, including interest on debt, all we did was to put our traffic underground, in leaking tunnels that will cost over $100 million to correct..
Depressing the Central Artery?

On this day in 1954, The Boston Globe announced the opening of the first elevated expressway in the United States. Hailed as an engineering marvel and a model of urban planning, the Central Artery incorporated the latest technology, including on and off ramps that could melt snow. Reporters predicted that a 25-minute commute would be reduced to a mere two minutes. But rave reviews soon turned to frustration, as the number of traffic jams and accidents skyrocketed. After years of mounting complaints, in 1983 Governor Michael Dukakis announced that the Central Artery would be disassembled and replaced with the country's first underground and underwater urban expressway. Twenty years and $15 billion later, the "Big Dig's" submerged section opened to motorists.

. . . concerned that fish might be harmed by the use of explosives under the harbor, engineers designed a "fish startling system" that emitted sound waves to chase fish and lobsters away from blast zones. 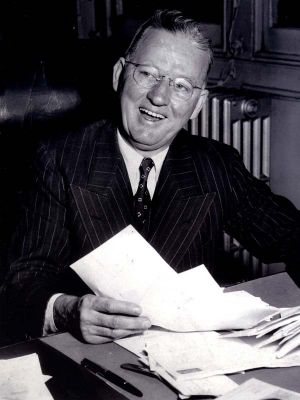 The "Big Dig" — two little words that describe the largest urban construction project in the history of the modern world: to move the John Fitzgerald Expressway underground as it runs through the heart of Boston. Nearly eight miles long and as wide as 12 lanes under the center of the city, the Big Dig was a larger undertaking than the Panama Canal or the Hoover Dam. Remarkably, this was the second time the same stretch of road made history.

At the turn of the twentieth century, traffic in Boston seemed hopelessly tangled. City officials tried to alleviate the problem by constructing the country's first subway, along with a state-of-the-art elevated railway system. The situation improved for pedestrians, but Boston's narrow, twisting streets were a nightmare for the growing number of automobiles. Drivers from outlying neighborhoods and the booming suburbs had to navigate a maze of local streets just to reach downtown, and business leaders worried that the center city would decline if workers — and, perhaps even more important, shoppers — could not access it easily by car.

As early as 1909 a commission recommended building a 100-foot wide road between South and North Stations. That proposal came to naught, but in the 1930s urban planners began to think about creating an elevated highway through the heart of Boston. The Depression and WW II put those plans on hold, but in 1949 William Callahan, the powerful Commissioner of Public Works, was determined to move forward. In 1951 construction began on the Central Artery.

Boston's narrow, twisting streets were a nightmare for the growing number of automobiles. 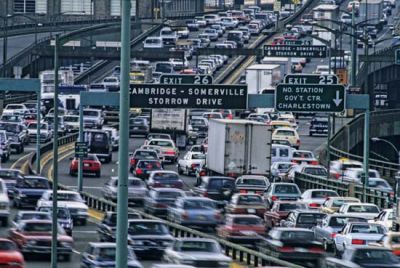 When the elevated section of the road was completed in the summer of 1954, Mayor John B. Hynes exulted, "For 20 years we have dreamed and hoped for something like this."

The dream had a dark side. In its enthusiasm for the Artery, the city razed vibrant neighborhoods in the North End and Chinatown, displacing thousands of families. The completed roadway was not the graceful skyway that had been promised, but an ugly mass of green-painted steel and concrete that cut the city off from the waterfront. (Bostonians eventually labeled it the town's other "Green Monster.") Worst of all, too many on-and-off ramps, combined with higher than expected traffic, made the road one of the most accident-prone in the nation. Midway through construction, the plans were changed: the remainder of the highway would be built underground.

The full length of the artery finally opened to the public in 1959. Almost immediately people began to discuss depressing the whole road, but the cost and engineering challenges seemed insurmountable. When in 1956 the federal government agreed to fund 90% of highway projects, the issue moved to the front burner. It took nearly 30 years for all of the city's various interest groups to reach consensus. In September of 1983, Governor Dukakis announced plans for what came to be called the "Big Dig."

The completed roadway was not the graceful skyway that had been promised, but an ugly mass of green-painted steel and concrete that cut the city off from the waterfront.

There were rough spots from the very beginning. While Fred Salvucci, the visionary state Secretary of Transportation, focused on resolving technical issues and local political conflicts, Senator Edward Kennedy orchestrated a one-vote override of President Reagan's veto of funding for the project. Once construction got underway in September 1991, the Big Dig team constantly had to devise innovative solutions to novel problems. For example, concerned that fish might be harmed by the use of explosives under the harbor, engineers designed a "fish startling system" that emitted sound waves to chase fish and lobsters away from blast zones.

The Big Dig was an engineering marvel. Its many triumphs included the world's largest slurry walls (concrete walls built from the surface to the bedrock to allow a discrete area to be excavated); transferring the weight of the elevated highway onto new supports while construction continued; tunneling 120 feet under the existing subway tracks; sinking and connecting pre-constructed sections of an underwater tunnel; and, perhaps most remarkable of all, keeping cars, trains, subways, pedestrians, and utilities running while completing the world's largest urban construction project.

The Big Dig will improved the flow of traffic through Boston, but there were other benefits as well. The project provided high wage jobs for over 15,000 people. Archaeology yielded fresh insight into prehistoric and early Boston. Utilities that had to be relocated were updated and now reside in streamlined, easy-to-maintain ducts. Spectacle Island, which received much of the fill from the project, was capped and developed into a 121-acre park. Nearly 30 acres of former Artery land has been designated the Rose Kennedy Greenway.

It was years behind schedule and billions of dollars over budget, but Boston, the city that pioneered the elevated expressway, could now claim the nation's largest underground and underwater limited-access highway.

In 2003 the submerged Central Artery finally opened. It was years behind schedule and billions of dollars over budget, but Boston, the city that pioneered the elevated expressway, could now claim the nation's largest underground and underwater limited-access highway. However, even as the ribbons were being cut, controversy persisted about leaking tunnels, faulty design, poor management oversight, and cost overruns. In July 2006, tragedy struck when a section of tunnel ceiling collapsed, killing a Jamaica Plain resident.

Over the next few weeks, whole sections of the Central Artery were closed while workers tested and in many cases reinforced ceiling panels. Both state and federal agencies launched criminal investigations. As the Boston Globe reported,"with a Big Dig flaw now responsible for a death . . . an unprecedented crisis of public confidence in the project" replaced the pride Bostonians had taken in the city's engineering miracle.

Over time, the parks over the underground expressway, known collectively as the Rose Kennedy Greenway, have played important roles in greater utilization of the the newly opened public land. A carousel of animals native to Massachusetts opened. Food trucks sell tasty meals and treats from around the globe to the many office employees and tourists that frequent the parks. Outdoor movies, weekend markets, and public art, are among the many events and sights on offer to those who visit the Greenway.

The Rose Kennedy Greenway is a string of parks built above the underground expressway on land once occupied by the Central Artery.

Highway to the Past: The Archaeology of Boston's Big Dig, ed. by Ann-Eliza H. Lewis (Secretary of the Commonwealth of Massachusetts, 2001).

On this day in 1952, Thomas P. ("Tip") O'Neill of Cambridge announced that he would run for the Congressional seat being vacated by John F. Kennedy as Kennedy began a campaign for the Senate. O'Neill...

On this day in 2002, more than 200,000 people celebrated Mother's Day by walking across the Leonard P. Zakim-Bunker Hill Bridge, months before it was open to cars. Built as part of the country's most...