PROFILE OF A COACH…RED AUERBACH

The man had lost his cool.

He was not Arnold (Red) Auerbach of the steel trap mind. He was more like a kid who pulled a fast one and got away with it.

It happened in the dressing room after Auerbach's final victory, when for the first time, this hard-bitten hot-head showed he could be: Silly, giddy and completely childish.

"Sure I lost my composure," he admitted the next day, nursing a non-liquor hangover.

"I felt such a great satisfaction in going out a winner, that everything came right out of me. I had everything right up to here," he said placing hands over head, "and that's the way it came out.

My quitting was different.

The average coach wins and then quits. Like he wins his last game and then announces it's over.

That way no one gets another shot at you.

… I gave them all a chance. I announced it was over when my team was riddled with injuries and with plenty of time for the other teams to beat me if they could.

As it turned out, Cincinnati, Philadelphia and Los Angeles had the shot and couldn't do it. That's why it felt so good. I didn't sneak away. They had their shots and couldn't beat me…

"Cowans" should be Cowens, "Walt" is Wilt, and "losthis knack" could use a space.
Typos

I agree on the typos. The author of the article must be young. Who could forget "Wilt the Stilt"?
Typos

Walt Chamberlain??? The author of the article must be young. It's Wilt Chamberlain. Who could forget "Wilt the Stilt"?
Typos

It is 2015 and you have still not changed the typo from Walt to Wilt. I'm not a huge basketball but when I read it I noticed it.
Login

On this day in 1966, Red Auerbach retired as head coach of the Boston Celtics after leading the team to 11 championships in 16 years. The Brooklyn native was a genius at acquiring talented players who made good teams great. He brought Bill Russell, Jo Jo White, Dave Cowans, Larry Bird, Robert Parish, and Kevin McHale to Boston. His style mixed simple set plays with the fast break, and his tactic of "the sixth man" — a star player coming off the bench at key moments — dramatically changed the way the game was played. He further revolutionized professional basketball by being the first NBA coach to draft an African American and the first to put five African American players on the court at the same time.

As a boy he earned money washing the windows of taxicabs lined up at the neighborhood gas station. 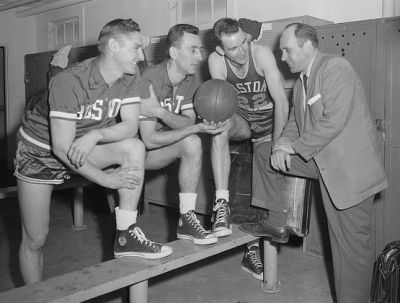 By the time Red Auerbach retired as head coach of the Boston Celtics, he had built one of the greatest dynasties in American sports history.

The son of Russian immigrants, Arnold "Red" Auerbach was born in 1917 in Brooklyn. As a boy he earned money washing the windows of taxicabs lined up at the neighborhood gas station. As a teenager he worked long hours pressing suits at his father's dry-cleaning business. These experiences gave him a strong work ethic that served him well with the Celtics, where for many years he negotiated contracts directly with his players.

A star guard in high school, Auerbach caught the eye of Bill Reinhart, who coached at George Washington University and helped Auerbach get a scholarship there. Reinhart was not disappointed. The young man from Brooklyn was the school's leading scorer. He was also a quick study; the running game he learned from the innovative Reinhart would be the key to his success in the NBA.

The year after graduating from college, he got his first coaching job at an elite private school in Washington D.C. He served three years in the Navy and then entered the professional game, coaching the Washington Capitols and the Tri-City Blackhawks. In 1949 he met Walter Brown, who hired him to coach the Boston Celtics beginning in the 1950-1951 season. His salary? $10,000 for the year.

While Auerbach immediately made an impression by drafting the NBA's first African American player, Chuck Cooper, his first six seasons were memorable chiefly for the superb ball handling of Bob Cousy, one of the greatest passers and playmakers in the game. The Celtics were executing the fast break well during those early years, but they lacked a defensive presence in the middle.

That all changed in 1956, when Auerbach traded for the draft rights to William Felton Russell, a 6-foot-9.5 inch center from the University of San Francisco. In his rookie year with the NBA, Bill Russell led the League in rebounding and became the cornerstone of the new Celtics, throwing the key outlet pass on breakaway plays and fast breaks. The Celtics won their first NBA World Championship that year in a thrilling double-overtime seventh game against the St. Louis Hawks.

With Russell injured, the Celtics lost the 1958 playoffs but Auerbach would never lose the last game of the season again. When Russell returned the next season, Boston swept the Minneapolis Lakers in the finals, a first in NBA history. Russell was named MVP often in these years, but as important to the Celtics as he was, Boston played and won as a team, collecting a record-setting eight consecutive NBA championships.

Under Auerbach, the Celtics made history in other ways, too. With Tom Heinsohn as the only white starter, usually KC Jones, Sam Jones, Russell and "Satch" Sanders would start. From time to time Auerbach would play Willie Naulls in Heinsohn's place, marking the first time an NBA team put five African American players on the floor simultaneously.

Surprisingly, since he was the first coach in history to win 1,000 games, Red Auerbach did not win his first NBA Coach of the Year Award until 1965.

"The Yankees won 25 championships. What did it take them, a hundred years? Red won nine in 10. He was the best coach in the history of professional sports. Period."

Before the start of the next season, Auerbach announced that it would be his last. The Celtics beat Wilt Chamberlain's Philadelphia 76ers en route to a seven-game victory over the Los Angeles Lakers in the finals. During the 1966 series, Auerbach announced that Bill Russell would succeed him as coach — the first African-American head coach in any professional sport. Legend has it that Auerbach paid Russell $100,001 a year, one dollar more than Wilt Chamberlain was earning in Philadelphia. Bill Russell played for and coached the Celtics for two years before moving on to coach the Seattle Supersonics and later the Sacramento Kings. Years later, Russell would sum up Auerbach's career this way: "The Yankees won 25 championships. What did it take them, a hundred years? Red won nine in 10. He was the best coach in the history of professional sports. Period."

When Auerbach assumed the role of General Manager in 1966, he continued to scout and draft players. He had not lost his knack for identifying gifted players who responded to coaching. He signed All-American guard Jo Jo White and center Dave Cowans. With "The Big Three" of Havlicek, White, and Cowans, the Celtics won it all in 1974 and again in 1976.

"He cut me from the Celtics, but I've never admired a person more."

By the late 1970s, however, the Celtics were no longer a winning team. Even as many inside the NBA considered Auerbach well beyond his prime, he drafted Larry Bird in 1978. Two years later, he brought Robert Parish and Kevin McHale to Boston in a deal that earned him the 1980 NBA Executive of the Year award. Bird, McHale, and Parish led the Celtics to championships in 1981, 1984, and 1986.

Although Auerbach retired as General Manager at the end of the 1983-1984 season, he retained the title of President of the Celtics organization. His trips to Boston grew less frequent — Auerbach lived in Washington all through his coaching career — although he was seen, chomping a cigar, at the Fleet Center during Boston's 2002 playoff run. When he died in Washington of a heart attack on October 28, 2006, at the age of 89, tributes poured forth. Former Boston Mayor Raymond Flynn told the Globe that Boston had "lost one of its greatest citizens. He cut me from the Celtics, but I've never admired a person more."

The Sports Museum at the TD Garden in Boston, also the location of the Boston Celtics home court..

On this day in 1884, Harry Haskell Lew was born in Lowell to a family that had long been active in the struggle for racial equality. Known from childhood as "Bucky," he made his mark...

Hugh Ogden Issues Report on Cause of the Molasses Flood