Description of Captain Boston and his crew, upon their return to Nantucket after 14 months at sea:

When the Loper arrived at Nantucket on September 17, 1830, with 2,280 barrels of oil,. . . the owners, including Captain Obed Starbuck, gave a dinner to the almost entirely Negro crew. Captain A.F. Boston, the grandson of the Slave [sic] Prince Boston, and Samuel Harris, two Negro navigators of note, mounted on horses and carrying boarding knives for swords, led the procession, followed by the crew, shouldering harpoons, whale spades, lances, and other whaling "craft." Tradition has it that the voices of the singers made the cobbles on Main Street reverberate as the unique parade passed through the marketplace of the town.

On this day in 1855, Captain Absalom Boston of Nantucket died. In an era when many African Americans worked as seamen, Absalom Boston stood out. In 1822 he captained an all-black crew on the whaleship Industry. That was but one unusual aspect of the voyage. Captains were usually respected but rarely liked. Boston's crew, however, had such a positive attitude toward him that they memorialized him in a ballad. He was a leader aboard ship and on land. When he retired from whaling, he combined a successful business with work on behalf of the island's black community. Although Absalom Boston had helped to integrate the island's public schools, when he died as a respected man of 70, he was buried in a segregated cemetery.

In the early 1800s, 18 percent of American seamen were men of color, most of them free. 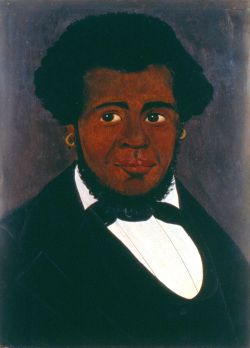 During the years of the early Republic, it became increasingly clear to African Americans — free and enslaved — that the new nation was not living up to its ideals. Northern states abolished slavery only gradually, and free black men and women faced widespread racism. With African Americans barred from most trades, many turned to the sea. Life on a vessel was dangerous, but at least it provided an income, however meager. In the early 1800s, 18 percent of American seamen were men of color, most of them free.

Many black seamen shipped as cooks or stewards. Although these positions were akin to domestic service, they were not undesirable. Seamen were virtually alone among American workers in being paid the same regardless of race, and cooks generally earned higher wages than average. For many men the opportunity to provide well for their families outweighed other considerations.

A black man had a better chance for promotion, more responsibility, and the potential for better pay on a whaleship than on a merchant vessel. A black owner of a boardinghouse for seamen noted that on a whaleship, "A coloured man is only known and looked upon as a man, and is promoted in rank according to his ability and skill to perform the same duties as the white man." When the whaling industry was at its height in the mid-1800s, approximately 700 black men were either harpooners or officers on American whaleships. A few, like Absalom Boston, sailed as captains.

. . . on a whaleship, "A coloured man is only known and looked upon as a man, and is promoted in rank according to his ability and skill to perform the same duties as the white man."

Life aboard a whaler was dangerous and difficult, with voyages often lasting for two or three years. Many men worked on a whaleship only once. If the vessel returned safely with its hold filled with whale oil or, better yet, with a still more valuable cargo of ambergris (used for perfume), a crewman's share of the profit could make all the hardships worthwhile. If over time a man had been promoted to officer, he was entitled to a larger share.

As a result, it was the whaling industry more than any other that offered black men a chance to work their way out of poverty. Nantucket was the capital of the early whaling industry. A third-generation islander, Absalom Boston went to sea in 1800 at the age of 15. He was still in his twenties when he had enough money to purchase his first parcel of land. As he developed his skills, and his luck held, he prospered.

After the 1822 voyage on Industry, he gave up the sea. He opened a store and became a leader of the island's black community, including serving as trustee of the African Baptist Church and supporting the campaign to integrate Nantucket's public schools. He died on Nantucket and was buried in the "Colored Cemetery.". His estate included his home, store, two other houses, and two additional lots.

In the Heart of the Sea: The Tragedy of the Whaleship Essex, by Nathaniel Philbrick (Viking, 2000).