THE COOLIDGES OF NORTHAMPTON: RETURNED FROM THE WHITE HOUSE TO THEIR HALF OF A DOUBLE HOUSE ON A QUIET SIDE STREET

. . . Half a year has passed since Mr. and Mrs. Coolidge left the spacious rooms and the wide lawns of the White House for half a two-family house in Northampton. . . . the country wondered how they would adjust themselves. . . . They had learned the uses of power and position, the ways of life that include butlers and secretaries and valets, the comfort of space and the pleasure of gracious rooms. . . . How could they leave all that for an existence based on six small rooms and a backyard shared in common with the occupants of the other side of the house? How could they blot out those eight years and take up life where they had left it? . . .

Northampton wondered before they came back, and watched after they arrived. The local papers offered them all sorts of suggestions about living quarters, and even went so far as to print pictures of fine old dwellings, any one of which would make an ideal mansion for an ex-President. The church members discussed the advisability of offering him another pew which would be more in keeping with his exalted station. The grocer wondered if he would get their trade again, or if they would order delicacies direct from New York and Boston.

Only the Coolidges wasted no time in speculation. Rumor said they had gone away with two trunks. They came back with a whole load of trunks and boxes and bundles.. . . In some way they all managed to disappear into the little house, though it was said afterward that Mrs. Coolidge had difficulty in cramming the wardrobe made for the First Lady of the land into a closet built for a simple housewife. The following Sunday the family appeared punctually at church. Mr. Coolidge in his familiar seat in the far corner of the pew they had occupied ever since they were first married, Mrs. Coolidge beside him.

. . . . Northampton loves to talk about [Coolidge]. Anyone with time and patience to wander and listen can hear any number of tales more or less true. . . . They puzzle over certain qualities of the man as intently as though they had not seen him go up and down Main Street for the better part of a quarter century.

. . . . They have put up a sign on the corner of Massasoit Street to tell the passing world that Calvin Coolidge lives at 21. It is partly a gesture of pride in the man who rose from a seat on the Town Council to the Presidency of the land, partly an act of courtesy to the thousands of motorists who make pilgrimage to see his house, partly an attempt at self-defense, for everybody in Northampton has had to tell everyone from Maine to California where the Coolidge house is. But there is something more in the simple sign than pride and practicality. It is shaped like a heart, and a heart is a symbol of affection that reserved New England towns do not ordinarily wear on their telegraph poles.

The only Presidential Library and Museum located in a public library is here in Northampton at Forbes Library - well worth a visit. http://www.forbeslibrary.org/coolidge/coolidge.shtml
The two Whiskey Special & Cal.

Former Gov. Foster Furcolo, himself from western MA, in his book, "Ballots Anyone" tells an interesting Coolidge story. In Northampton there was an establishment named Rahar's that in the old days had a whiskey special. A single shot was 15 cents or two shots for a quarter. The story goes that Cal would stop in on his way to work in the morning and place a quarter on the bar and only take one shot of whiskey. On his return home in the evening he would stop in and take his second shot at that time.
the light in August on the 3rd day 1923

There is much to be said about this post but I will not say it. Only: The Coolidge Homestead Inaugural on this date in 1923 was illuminated by a kerosene lamp. (A lantern is carried to the barn and elsewhere on a farm where light is needed.) And, the Coolidge hand was not on "the family bible". In his Autobiography Coolidge writes: ". . . it is not the practice in Vermont or Massachusetts to use a Bible in connection with the administration of an oath." ------------------------- Jim Cooke
Login

On this day in 1923, upon the death of Warren G. Harding, Calvin Coolidge was sworn in as President of the United States. "Silent Cal" had been the Republican governor of Massachusetts, little known outside the state, until the Boston police strike of 1919 catapulted him into the national spotlight. Coolidge was quick to gain political advantage from the situation. "There is no right to strike against the public safety by anybody, anywhere, any time," he proclaimed. In this turbulent period, when many Americans feared the country was being overrun by immigrants, radicals, and militant trade unionists, the voters found his law and order stance and his image as an old-fashioned, rustic Yankee farmer profoundly reassuring. Within a year of the strike, Coolidge was elected Vice President.

It was his campaign aides who transformed Coolidge's quirky Yankee ways into vote-winning virtues. 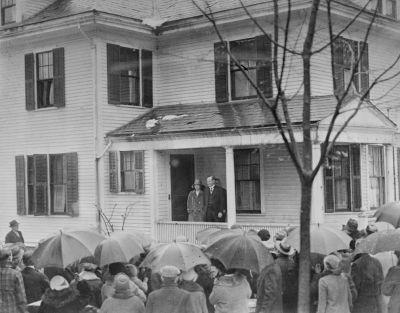 As his name suggests, John Calvin Coolidge came from old Puritan Yankee stock. He grew up in rural Plymouth Notch, Vermont. The son of a storekeeper, Coolidge was practical, hardworking, frugal, conservative, and moralistic. A Puritan in mind and manner, he had little personal charm. But as he worked his way up in politics, it became clear that Coolidge's deep roots in rural New England and his stolid nature could work to his advantage. He exemplified the self-reliant simplicity of an earlier America. The writer Sinclair Lewis once said, "He may not shoot off a lot of fireworks, but do you know what he is? He's SAFE."

Coolidge may have been the first U.S. president elected by voters responding to what they perceived to be his personal qualities rather than his position on political issues. The nation was reassured by a plain spoken Vermont farmer taking the oath of office on the family bible by lantern light in his boyhood home.

But Calvin Coolidge was never a Vermont farmer. Nor was he rustic or simple. He was a determined, driven man, who lived for politics. It was his campaign aides who transformed Coolidge's quirky Yankee ways into vote-winning virtues. Coolidge was only too happy to go along.

The writer Sinclair Lewis once said, "He may not shoot off a lot of fireworks, but do you know what he is? He's SAFE."

Coolidge left Vermont at the age of 19 to attend Amherst College; for the rest of his life, Massachusetts was home. He had no interest in farming, but growing up the son of a shrewd and industrious merchant gave him a deep respect for business. His father's industry and frugality — traits that his son shared — made it possible for Coolidge to earn his degree at Amherst and then apprentice with a law firm in Northampton, the Hampshire County seat. The town would remain his home for the rest of his life.

In 1898 Coolidge set up his own law firm on Main Street and practiced law in Northampton for the next two decades. In 1905 he married Grace Goodhue, a teacher at the Clarke School for the Deaf. They rented half of a modest two-family house, where they would live for most of their married life. There they raised their two sons, John and Calvin. The family did not own a car, used a party-line phone, and rarely entertained.

He was hardworking, parsimonious, and self-contained, but he was not simple. He was astute about local politics and almost immediately set his foot on the first rung of the political ladder. He never stopped climbing. He began with an appointment to the Republican City Committee. In the next eight years, he served as city solicitor, clerk of the courts, chairman of the Republican City Committee, and finally state representative. After two years in the legislature, he was elected mayor of Northampton. In 1911 he returned to Beacon Hill as a state senator.

He was astute about local politics and almost immediately set his foot on the first rung of the political ladder. He never stopped climbing.

Other Republican politicians had begun to take note. The Berkshire paper baron Murray Crane and Boston department store magnate Frank Stearns became supporters. A fellow Amherst graduate, Stearns rallied alumni to help Coolidge unseat the latest in a long line of Harvard-educated governors. Crane and Stearns realized that Coolidge's image as a "common man" would be an effective counter-weight to the Democrats' more populist policies. Coolidge did his part, building a reputation as a dependable, reliable, conservative leader while carefully calculating the consequences of each move.

In 1918 Coolidge was elected Governor of Massachusetts. One year later, with the nation facing labor unrest and fearful of anarchy, radicalism, and violence, Boston erupted in rioting when the police went on strike. Coolidge waited until violence and looting had peaked before stepping in to restore order. The press celebrated him as an heroic defender of law and order; his name became a household word.

Two months later, he met New York advertising genius Bruce Barton. For the next decade, Barton would devote himself to shaping Coolidge's public image. He cast him as the solid, dependable Yankee farmer with unimpeachable Puritan credentials who could be counted on to uphold moral standards; his was the voice of "this great silent majority."

He cast him as the solid, dependable Yankee farmer with unimpeachable Puritan credentials who could be counted on to uphold moral standards; his was the voice of "this great silent majority."

Coolidge was the overwhelmingly popular choice for reelection in 1924. For the next four years Barton continued to promote Coolidge as an old-fashioned Yankee standing firm in the rush of a modern, scandal-ridden age. Coolidge, as Barton portrayed him, was a man who had "spent his whole life amid the traditions of the forefathers, and is himself a kind of an embodiment of those traditions, a kind of contemporary forefather."

Coolidge did not run for reelection in 1928. As Herbert Hoover took the oath of office, Coolidge returned to his modest home in Northampton. He could only watch as his image as the "wise, strong, silent Cal" fell victim, along with so much else, to the stock market crash and Great Depression.

"The Man Nobody Knew: Bruce Barton and the Construction of Calvin Coolidge," in A Place Called Paradise: Culture and Community in Northampton, Massachusetts, 1654-2000, ed. by Kerry Buckley (University of Massachusetts Press, 2004).